(RNS) — It’s difficult to look at the packed Sunday service at Joel Osteen’s Lakewood Church in Houston — capacity 16,800 — and imagine that it could ever have a cash flow problem. But as Lakewood, along with Hillsong, Willow Creek, Saddleback and other prosperous megachurches in the United States, has closed its campus for the next few weeks or months out of concern for spreading COVID-19, its finances bear monitoring to see how they withstand this abrupt disruption to their weekly rituals.

The fact is that many large congregations’ sheer size masks a fragility that only emerges in times of crisis. The larger the gathering of worshippers, the more these places depend on the volunteering, recruitment and, of course, offerings they glean each week. What will happen when our current pandemic prohibits their most essential function?

For some, the loss of public assembly may not matter much. It will become a part of the folklore of the organization. For others, though, the COVID-19 pandemic will likely be pointed to as the moment when they realized just how brittle their church actually is — or was. 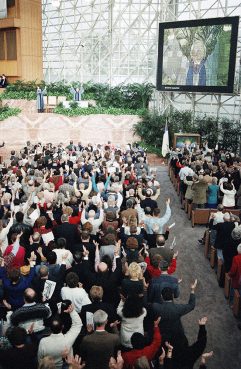 Back in the early 2000s, the Rev. Robert H. Schuller, author of “The Be Happy Attitudes” and “Tough Times Never Last, But Tough People Do!,” pastored a spiritual juggernaut: His Crystal Cathedral in Orange County, California, one of the largest churches in the country, stood as one of the most recognizable ministries in America. His Sunday morning broadcast, “Hour of Power,” had run uninterrupted for over three decades.

But the 2008 financial crisis — the one that gave us the phrase “too big to fail” — was Schuller’s Waterloo.

Nearly 50 years of building after building leveraged on big donations and even bigger loans had become a template for continual expansion. Schuller was so confident in the future of his church that he had commissioned a $50 million stainless steel-clad Welcoming Center designed by world renowned architect Richard Meier. It was an architectural flourish so futuristic that it would serve as the headquarters for Star Fleet during the filming of “Star Trek: Into Darkness.”

By 2010, however, the megachurch filed for bankruptcy. This came as a shock to those who considered Schuller a model for congregational growth and stability. His philosophy had fueled much of the Church Growth Movement, emphasizing the building of ever-larger facilities to accommodate expected surges in attendance, while depending on ever-larger loan obligations to fill the financial gap between current and expected future revenue.

But in the first years of the 21st century, structural forces had begun to undermine Schuller. As he continued to build expensive, architecturally aggressive buildings, the growth of Southern California’s demographics shifted, while the transition to younger pastoral leadership, the accumulated weight of costs for staffing, maintenance and loan servicing, proved too much. His glass church shattered. The ministry eventually sold its iconic building to the Roman Catholic Diocese of Orange. Adding to the ignominy, Schuller ended up suing his own ministry.

The demise of Schuller’s church shows how an abrupt financial downturn can place unexpected pressure on ministry budgets and exert enormous pressure on pastors to reinforce the spark of charismatic excitement. The need for fresh flows of capital means a constant influx of people committed to the congregation, which, history suggests, depends on the force of communal excitement and face-to-face experiences. 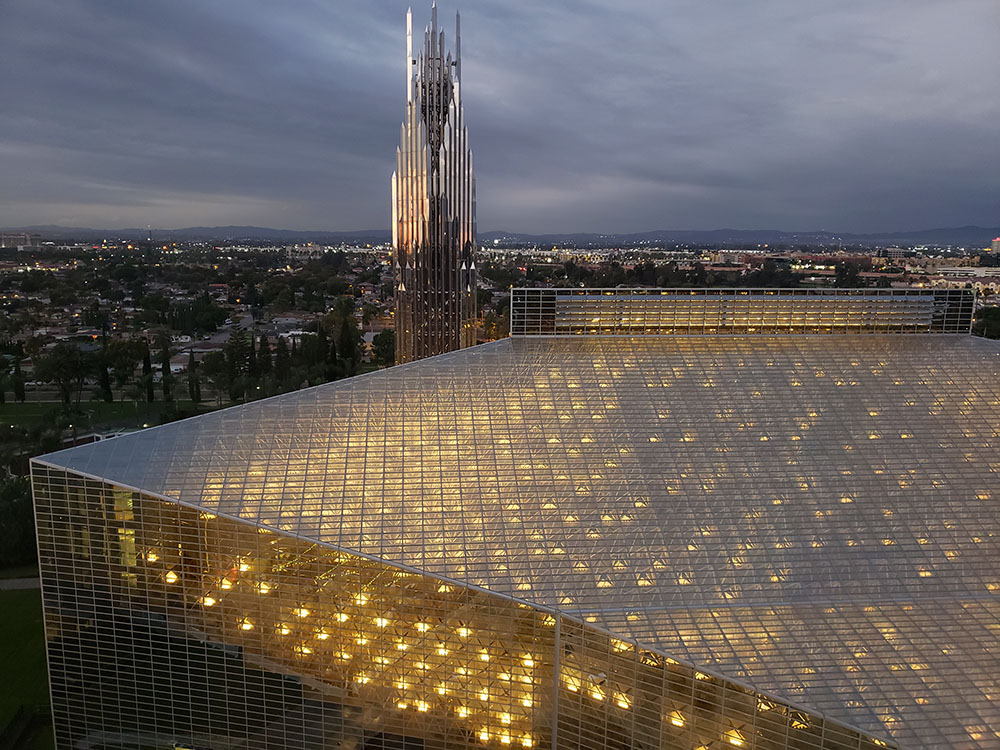 Christ Cathedral, formerly Crystal Cathedral, is seen during the “Lighting of the Quatrefoils” ceremony on Oct. 13, 2018, in Garden Grove, California. Photo courtesy of Hank Evers

We are not surprised when smaller religious groups’ budgets are stretched, but megachurches, with their higher overhead investments and social profiles, tend to teeter more than we realize. In fact, megachurches, with their dependence on ambition and highly leveraged growth, may be vulnerable in ways that more modest organizations aren’t. When contingent events interrupt the rhythms and habits of congregational life, the consequences can be catastrophic. Financial strains that had existed for years will result in desperate (and often failed) fundraising initiatives and last-minute (often disadvantageous) selling of property.

The COVID-19 pandemic is a good time for all religious organizations to take stock of their tithing practices, their debt as well as member recruitment, integration and sense of belonging. All will be challenged in the months to come.

(Mark Mulder is professor of sociology at Calvin University and Gerardo Martí is professor of sociology at Davidson College. Their book, “The Glass Church: Robert H. Schuller, the Crystal Cathedral, and the Strain of Megachurch Ministry,” will be published in April 2020. The views expressed in this commentary do not necessarily reflect those of Religion News Service.)