(RNS) — Across the nation, some of our politicians are exempting religious services from public health bans on large gatherings, allowing groups to assemble in prayer amid the pandemic. Meanwhile, some religious leaders are disobeying the orders that are in place.

Both the Constitution and many sacred texts make clear: To protect our beloved communities, we can and must temporarily observe our religious practices at home.

Constitutionally, it’s true that restrictions on public gatherings cannot target houses of worship, but that’s not what’s going on here. Just as religious entities must abide by the same building codes that apply to community centers and banks, churches, mosques and synagogues must follow public health orders that apply to secular large gatherings. COVID-19 doesn’t discriminate.

Indeed, the constitutional principle of church-state separation actually prohibits the government from granting religious accommodations that allow people to be harmed, which clearly applies here.

But it’s not only a matter of law; it’s a matter of faith, according to a broad array of religions. Theologians point to the biblical prophet Isaiah, who tells us it’s an abomination to worship in ways that ignore the needs of the vulnerable, especially during times of crisis.

In my faith, the Jewish principle of pikuach nefesh (“saving a life”) commands Jews to prioritize the preservation of life over practically every other religious rule. That’s why so many rabbis are currently advising Jews not to gather for Passover beyond their households, or attend Shabbat services – inconceivable advice before this public health crisis. 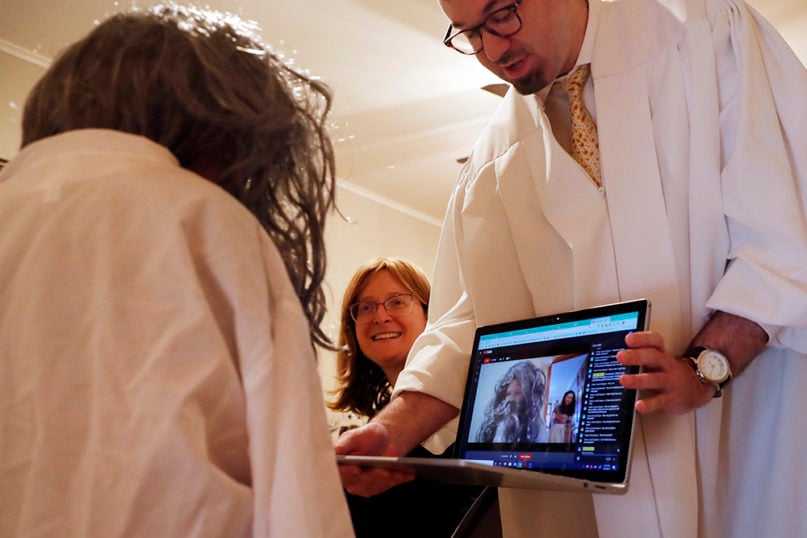 Rabbi Shlomo Segal, right, holds his laptop so participants see his daughter Rayna, 8, left, dressed in a white robe and wig as the prophet “Elijah” during a virtual Passover Seder, Wednesday, April 8, 2020, in New York, in the Sheepshead Bay section of Brooklyn, as the coronavirus outbreak and social distancing rules continue. Accoring to Jewish tradition, Elijah will arrive as an unknown guest to herald the advent of the Messiah. During the Seder dinner, biblical verses are read while a door is briefly opened to welcome Elijah, who it is believed will appear and usher in the era of the Messiah. The Seder commemorates Jews’ historical redemption from Egyptian bondage, but also foretells their future redemption. (AP Photo/Kathy Willens)

Last week, the National Association of Evangelicals and Christianity Today issued a statement urging evangelical Christians to cancel in-person services and find new ways to gather in sacred community. They join religious organizations and denominations as diverse as the Union for Reform Judaism, The Church of Jesus Christ of Latter-day Saints, the National Muslim Task Force and Catholic dioceses across the country in urging members to seek new ways to worship and pray.

To protect the health of our nation, we should all be encouraging these efforts and the flourishing of our religious creativity, not exempting houses of worship from public health orders.

Religious freedom also must be considered in the distribution of government funding in this moment of crisis. The federal stimulus package, also known as the CARES Act, allows small businesses and nonprofits to take out loans to cover payroll. It also allows the government to forgive a portion of those loans, essentially converting them into grants. But giving houses of worship government grants to pay their faith leaders’ salaries would violate the First Amendment.

For the clergyperson worrying about their own bills in the midst of declining donations — while also worrying about the well-being of their congregants and the wider community — this is surely a painful truth. But these limitations exist to protect religious freedom for all.

Restrictions on government funding of religion serve to safeguard the autonomy of religious institutions, protect the conscience of the individual taxpayer and ensure an equal playing field for all religions. In good times and in bad, our Constitution preserves religious freedom by guaranteeing that houses of worship do not suffer from the government interference that accompanies public funding and by ensuring that each of us gets to decide personally how – and if – to support any religion.

As our nation and world continue to grapple with the COVID-19 crisis in the weeks ahead, we face fear and anxiety about the health and safety of our family and friends and, for many, the loss of jobs and income. But in the midst of dizzying uncertainty and challenge, now is the time to lean into that which we hold most dear: our loved ones, our faith and moral codes, the capacity for human compassion and the constitutional principles on which our country stands. United in these core values, we can overcome this crisis together in spirit, even if not in person.

(Rachel K. Laser is president and CEO of Americans United for Separation of Church and State. The views expressed in this commentary do not necessarily reflect those of Religion News Service.)