(RNS) — Our country is facing a series of extraordinary moments simultaneously. We are experiencing a public health crisis — now an economic crisis as well — unlike any since the Spanish flu pandemic over a century ago.  This pandemic has arrived during a presidential election year, one in which we face the prospect of reelecting a president who threatens the health of our democracy.

Our nation has had presidential elections under difficult circumstances before. During the Civil War, two months before the 1864 election, President Abraham Lincoln was all but assured defeat. Instead of losing his nerve, he stayed the course, and victories in the field, and the election, finally came. His reelection, made possible in large part by his character and values, preserved the Union and the freedom of the slaves.

Now more than ever do we see the importance of voting for a person with the character and values required to address our challenges in ways that make us stronger.

We believe that person to be former Vice President Joe Biden. He, too, was staring electoral defeat in the face but stayed the course and is now poised to be the Democratic nominee for president. As in Lincoln’s time, today we must have a president firm in his resolve to do what’s right for our country, to cure what ails us.

The coronavirus crisis demonstrates that our country desperately needs a president who has the wisdom to see what’s right even before it becomes a crisis and the courage to address it early. To have wisdom requires humility, to understand that we don’t have all the answers and must listen to those more knowledgeable than ourselves in order to see the truth. The courage to speak and then do the truth in such times comes from a deeper place, one of love. It is love that gives us the courage to sacrifice when called upon.

Biden loves our country with an abiding love. From love flows another characteristic we must have in a president: a desire for justice, to see that everyone is treated fairly. When asked for his personal motto at the end of the South Carolina debate, he said: “When you get knocked down, you get up, and everyone’s entitled to be treated with dignity. … I’m no better than anyone else.” Deep in his heart, Biden believes what our Declaration of Independence proclaims — that all persons are created equal.

Sometimes in discussions about presidential candidates, character and policy specifics are played against each other. This is a false either/or. A candidate’s plans, like federal budgets, are moral documents. Someone with good character will strive to have the right policies. 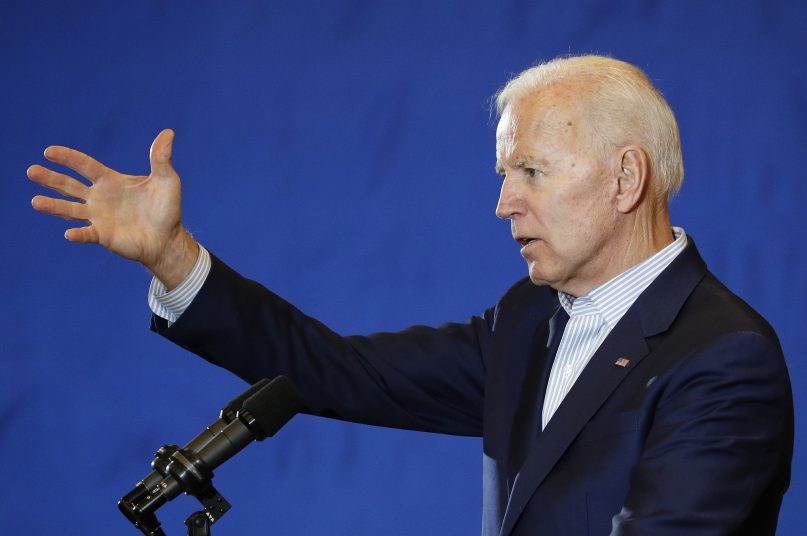 Former Vice President and Democratic presidential candidate Joe Biden speaks at a rally with members of a painters and construction union on May 7, 2019, in Henderson, Nevada. (AP Photo/John Locher)

As his plans demonstrate, Biden is ready to stand up for what’s right on health care, climate change, guns, immigration, religious freedom and racism. He has laid out how we should address the coronavirus and its economic impacts. Biden’s plans for our country are guided and shaped by his values and will be brought to reality by his character.

Wisdom. Humility. Courage. Truthfulness. Love. The desire for justice. These are the character qualities and values we need in our president for such a time as this.

While it is abundantly clear that Biden has them, it is equally clear that President Donald Trump does not. This — and his record of being willing to do anything, including breaking laws and subverting the Constitution, to get reelected — compels us to speak out. Publicly supporting a presidential candidate is not something either of us has done before. We do so for love of country, but even more profoundly because of our calling to love God and our neighbors and to care for the most vulnerable among us.

The good news is that Biden can defeat Trump, in part by attracting evangelicals like ourselves. Even a small percentage of evangelical votes switched from Trump to Biden in crucial states could be the difference in the election. We will work to have them join us.

Some of our fellow evangelicals may be struggling with being pro-life and not supporting the Republican candidate. Reducing unplanned pregnancies and the poverty that leads many to choose abortion honors an ethic that respects human life both in the womb and thereafter. Policies of the Obama-Biden administration were quite successful at reducing such circumstances, and abortions dropped.

It is a moral imperative that  Trump be defeated; the danger he poses is too great. As president, Biden will set our nation on the right path once again. We urge everyone to support the candidacy of former Vice President Joe Biden.

(The Rev. Richard Cizik is president of the New Evangelical Partnership for the Common Good. The Rev. Jim Ball, a former senior executive in a Christian environmental organization, is author of “Global Warming and the Risen Lord.” The views expressed in this commentary do not necessarily reflect those of Religion News Service.)

News
Pope Francis addresses the Communion ban: ‘I have never denied the Eucharist to anyone!’
Follow us on Facebook!
Submit your photos to RNS