LOS ANGELES (RNS) — Just over a month after the Dream Center began offering free meals to Los Angeles residents in the midst of the pandemic, the faith-based nonprofit reached a major milestone.

On Tuesday (April 21), the center passed the 350,000 mark of free meals it has provided since mid-March.

The Dream Center in Echo Park — which is run by the Angelus Temple, a Pentecostal megachurch — is open from 7:30 a.m. to 6:30 p.m. seven days a week to provide volunteer-prepared meals as well as donated food from restaurants, not just to families with children from the Los Angeles Unified School District, but to anyone who stops by for its drive-thru service.

Angelus Temple pastor Matthew Barnett said on Instagram that the Dream Center will be celebrating every 50,000 mark as a milestone.

In a post on Tuesday, the pastor reflected how 25 years ago he came to LA with a plan to stay for only three months while his father could find an experienced pastor. He stayed after his father, who helped shape the Dream Center, couldn’t find anyone. Barnett said there was zero momentum back then and he decided to move his desk on the sidewalk to hand out a few bags of food he was able to purchase.

“It felt so small and insignificant but it was a start,” he wrote. “Where am I now? Living the best years of ministry doing the most simple things.”

Twenty Five years ago I came to Los Angeles only expecting to be here for 3 months. I was twenty years old and my dad asked me to come help him until he could find an experienced pastor. He couldn’t find anyone so I just stayed. Zero momentum back then, I decided to move my desk on the sidewalk and just hand out a few bags of food I was able to buy. It felt so small and insignificant but it was a start. The ministry of the @ladreamcenter is not an overnight success but a slow grind. It took so long to get any momentum. Now today, crazy enough, I find myself back to where it all started giving out food on tables in a parking lot. Twenty five years of ministry, authored books, spoke at some of the most incredible conferences, big days with thousands of people packed into a church service. Where am I now? Living the best years of ministry doing the most simple things. Life is good, God is good, the basics will build you stronger than ever.

Since mid-March, the Dream Center has received a number of donations.

With support from the “Jesus is King” rapper Kanye West, the Dream Center was able to deliver meals to older residents, Barnett told Fox News. Local and chain restaurants such as Vince’s Market and Chick-fil-A have also have provided food. People have stopped by the center to drop off water bottles or diapers, or to donate some of their own cash.

The Dream Center began providing free meals after the Los Angeles Unified School District, one of the two largest districts in California, closed to reduce the spread of COVID-19. The center is delivering care packages to older residents and food to outreach sites in Watts and Skid Row, according to its website.

Angelus Temple canceled its in-person worship services in early March and focused on feeding those in need. Services have continued to stream online. 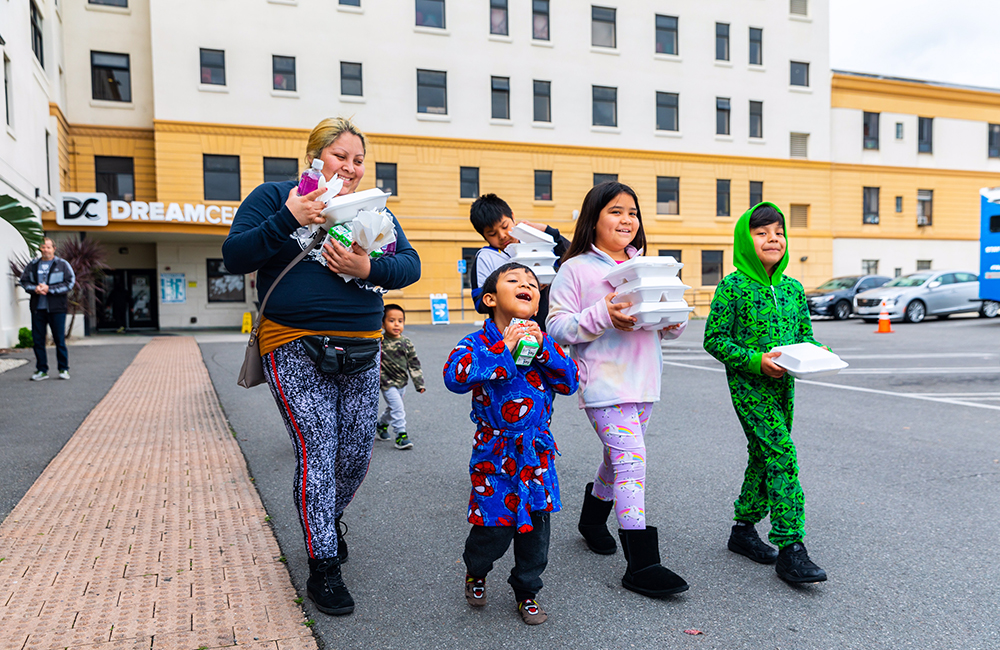 People carry free meals away from the Dream Center, in the Echo Park neighborhood of Los Angeles. Dream Center is the nonprofit of Pentecostal megachurch Angelus Temple. Photo courtesy of Dream Center

Barnett said some people thought the church’s decision to cancel its public services was abrupt and drastic, “but we knew that something was about to happen that was to become major,” he told Religion News Service in a previous interview.

That resistance, he said, “is not productive in bringing about healing and possibilities of what we can do during this time.”

Tuesday evening, Barnett shared an Instagram video in which he reflected on a conversation with a man who was the last person to drive through the Dream Center that evening. Barnett gave him rolls of toilet paper. The man told him he had been using newspaper.

“It made me think about how much God cares about the last detail and the last car and the last man that needs rolls of toilet paper,” he said.

“I just don’t know how long that California is going to be in this situation, but one thing I know is we’re going to be fighting all the way until the end,” Barnett said.