(RNS) — Little Richard — the musician known for singing, shouting and flamboyant showmanship — was more than a little religious at times during his life.

The man born Richard Wayne Penniman in 1932 in Macon, Georgia, to a church deacon and a Baptist mother died Saturday (May 9) at the age of 87. He was known for such 1950s hits as “Tutti Frutti” and “Good Golly, Miss Molly.”

“Little Richard was a pioneer of rock and roll who was steeped in gospel and unashamedly borrowed from it to create his unique style,” wrote Steve Turner in the book “An Illustrated History of Gospel.”

Here are six examples of how religion played a role in Little Richard’s life.

He grew up in a religious family and spoke of religious practice throughout his life.

Little Richard was influenced by relatives in the Baptist and Holiness traditions as well as gospel singers.

“It was through listening to gospel music by the Clara Ward Singers that he discovered group member Marion Willams’s gospel yodel, which Little Richard would later incorporate into his signature song ‘Tutti Frutti,’” wrote Bil Carpenter in “Uncloudy Days: The Gospel Music Encyclopedia.”

British GQ magazine noted that Little Richard, who lived for more than two decades at a Hyatt hotel in Los Angeles, once told the Sunday Times about a typical day in his life: “I wake up and worship. I get on my knees. I pray. I thank God for the activity of my limbs. Then I order room service.”

In 1957, two years after “Tutti Frutti” was released, he changed course after plane trouble on a concert tour and entered Oakwood College, a historically black Seventh-day Adventist college in Alabama now known as Oakwood University, according to “Uncloudy Days.” In the 1960s, he recorded several gospel albums on different labels, including “Clap Your Hands” for Spin-O-Rama and “King of the Gospel Singers” for Mercury Records.

“Some of Richard’s gospel music was far more reverential and subdued than one would expect from such an electrifying performer,” Carpenter wrote. “However, he did flex his vocal muscle on the Coral Records LP on songs such as ‘Walk with Me, Lord.’”

A later album, “Lifetime Friend,” in 1986, was “a commercial failure,” Carpenter said. However, “Great Gosh A-mighty” — the first track on that album and a song featured in the movie “Down and Out in Beverly Hills”— peaked as a No. 42 Billboard hit that year.

He tied his secular music to sacredness.

“I was playing for the church. My grandfather was a preacher — Rev. Penniman,” Little Richard told a BBC interviewer in 1972 before his performance at London’s Wembley Stadium. “I used to play for him every Sunday morning ’cause he was taking up collections about seven times. You know, just one more penny, just one more quarter. … So I used to play ‘Tutti Frutti’ and ‘Long Tall Sally’ while he be preaching, but he didn’t know it.”

He added later in the interview: “I consider my music sacred. And I consider that ‘Long Tall Sally’ is sacred.”

The BBC interviewer asked him to elaborate.

“I don’t mean that it’s a hymn — like an anthem in church — but it’s nothing bad about it,” said Little Richard of the song. “A song of love and joy in a world of chaos and commotion and strife. We need a little joy. When I sing my songs you can’t sit still. Your big toe shoot up in your boot.” 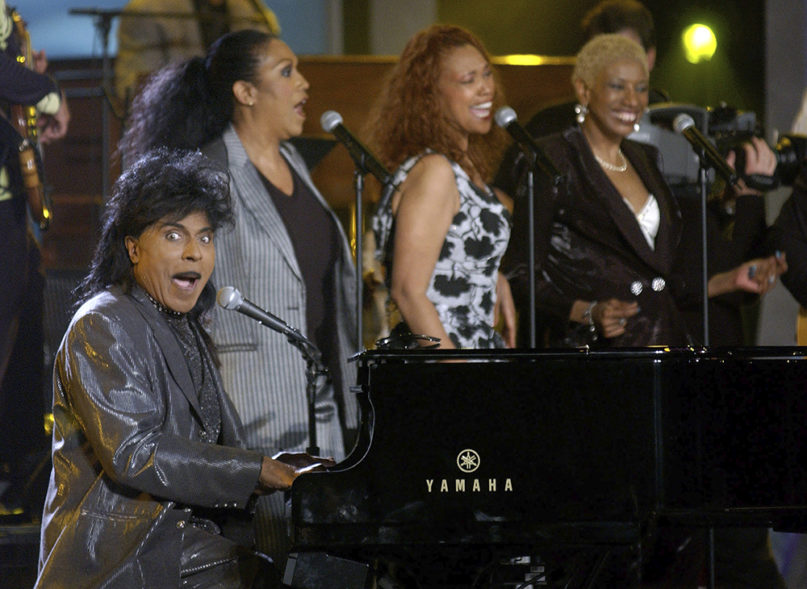 He also bounced between sometimes conflicting views about his religion and his sexuality.

“None has explored the opposing extremes of holy restraint and secular indulgence so comprehensively as Little Richard,” reported British GQ in 2010. “His Bible, which was almost always by his side, doubled as his contacts book.

“And anybody that come into show business, they gonna say you are gay, are you straight, are you homosexual or something,” he said in the 3ABN appearance. “But God, Jesus, made men men, he made women women and you got to live the way God wants you to live … and he loves all of us regardless of whatever you are. He loves you. I don’t care what you are. He loves you and he can save you and he will save you.”

Little Richard also told 3ABN that he asked God if salvation was possible as he sang some of his hit songs.

“I said now, Lord, can I do this and still be saved?” he recalled. “The Lord said, ‘Richard, no man can serve two masters.’”

He spoke of observing the Jewish Sabbath.

“I went to study religion, Jewish religion, you know from sundown Friday to sundown Saturday, Sabbath and you know the Passover feast,” he told the BBC interviewer, describing himself as a “little Jewish boy, black bottom, from Georgia.”

The Forward reported that Little Richard seemed to have more than a passing interest in Judaism.

“The American Jewish Director Paul Mazursky, who cast Little Richard in his films ‘Down and Out in Beverly Hills’ (1986) and ‘The Pickle’ (1993) noted in his memoirs that when the actor refused to shoot the former film on a Friday evening, Mazursky ‘figured it was a scam,’ but asked Little Richard’s manager, who responded with a straight face, ‘He really is Jewish. …’”

He worked as an evangelist at times.

He developed the “Little Richard Evangelistic Team” in the 1950s and told Rolling Stone he ministered across the country.

“I served at the tent meetings, doing all the menial tasks like ushering, tightening the ropes, showing slides and collecting questions from the audience,” he said. “I shared in the ordinance of humility by washing the feet of other members before taking communion. My life changed completely.”

More recently, Little Richard appeared in an October 2017 broadcast of 3ABN, declaring at the start, “In times like these, we need a savior.”

Country music artist Tim Atwood recalled Little Richard sharing his faith with him several years ago when he ran into him at the office of an accountant.

“One of the biggest shocks in my life was when Little Richard said to me, ‘I know who you are, Tim. I’ve been following your career,’” Atwood said in a statement. “That was a surreal moment for me! He then sent his assistant to his car and presented me with a Bible. He told me wherever I do a show, make Jesus proud. It’s the best advice anyone has ever given me. To most of the world Little Richard was a bigger than life entertainer (and he was that for sure), but to me he will always be that kind soul who encouraged me in my music and who cared enough to talk about my salvation.”