(RNS) — Brian Kaylor didn’t realize how the coronavirus pandemic — with its stay-at-home orders, school closures and other distancing measures — was emotionally impacting his 8-year-old son, Kagan, until the children’s minister at their church started sharing a nightly bedtime story.

In the first storytime video, posted on Facebook and Vimeo, the minister at First Baptist Church in Jefferson City, Missouri, talked about feeling sad and angry.

“How is she reading my mind?” Kagan asked.

The second-grader is struggling with not seeing his friends, and the videos have been a comfort, said Kaylor, editor and president of Baptist magazine Word&Way.

Kaylor pulls the videos up each night on his phone, and his son disappears into another room to watch, usually wrapped up in a blanket, he said.

Kagan runs to the screen when the same minister gives the children’s messages during online services. He shows off his latest Lego builds to his friends during Wednesday Wave sessions she hosts for the kids on Zoom.

“I think my son needs the social interaction and comfort from our church community right now even more than I do,” Kaylor said. “So, I appreciate ministers working to create that space virtually.”

As the coronavirus continues to upend daily life in the United States, churches and Christian leaders are finding ways to relieve bored and anxious children unable to leave their homes — as well as their overwhelmed parents. 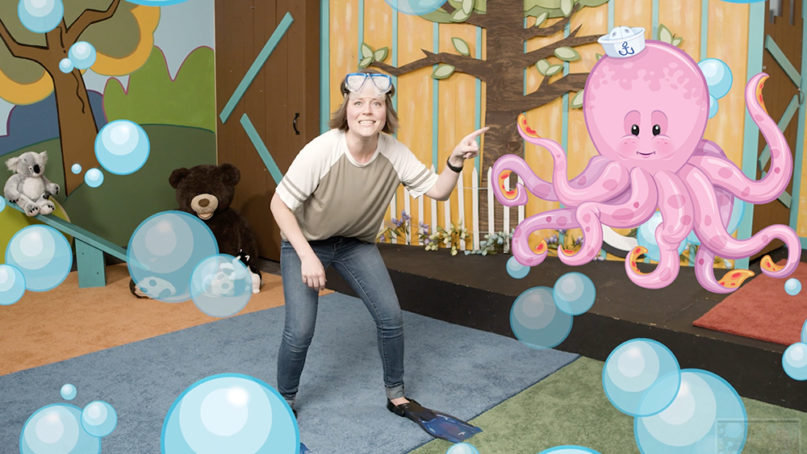 Just a few of the available options:

Progressive Christian author Matthew Paul Turner has hosted a Sunday Story Time, reading his bestselling children’s books like “When God Made You” on Facebook Live. Daneen Akers also has read selections from her book aimed at slightly older children, “Holy Troublemakers and Unconventional Saints,” on YouTube.

Christian meditation app Pray is making all of its content for children free during the pandemic.

Washington National Cathedral posted coloring sheets on its website for kids to color their way through the Episcopal cathedral.

Trail Life USA is taking its program, which it has described as a Christian alternative to scouting, online this week with its first-ever Backyard Movie Night and Campout.

“Consider it my way of babysitting for you for just a little while,” Moore tweeted.

Other churches are engaging with their youngest members using the same low-key online tools that have grown popular over the past few months for Sunday services: not just Facebook Live videos, but also Zoom meetings and emails packed with resources for their parents. DeTar Birt has been prerecording messages for kids to watch during the church’s Sunday services and streaming a weekly “Storytime with Pastor Ashley” on Facebook Live.

“Everything is just so fascinating and inspiring when everything outside is scary and awful,” she said.

She recently added a half-hour Zoom Sunday school class before services begin, something she said one family had requested. Another family asked if she’d be willing to play video games with their children over Skype, which she took as a “really cool compliment.”

Ministering to children online is not without its challenges for clergy, DeTar Birt said.

That includes bridging a wide age gap. On a regular Sunday, the kids in her class range in age from 7 to 14. These days, at least one of those children is accompanied by a 3-year-old sibling who usually would be in the preschool class.

But, the pastoral fellow said, often the youngest children are asking some of the deepest, most difficult questions.

“I don’t have an expectation around what certain ages are going to be capable of,” she said.

That also includes attempting to make online videos and teleconferencing as interactive as an in-person gathering at Rutgers, part of the mainline Presbyterian Church (U.S.A.). Usually, they would make a craft or build something together or color pictures as they talked.

On Easter, DeTar Birt hid props from the story of Jesus’ resurrection in the Gospel of John in frame on Zoom and asked the children to find and point them out before she could tell the story.

It’s hard, too, to be a one-person video production team, coming up with new ideas, filming them and then editing them together, she said.

Maybe the hardest part, she said, is “just trying to make sure I remember that this is a marathon and make sure I take time to breathe and to relax so I don’t burn out from just constantly producing content.” 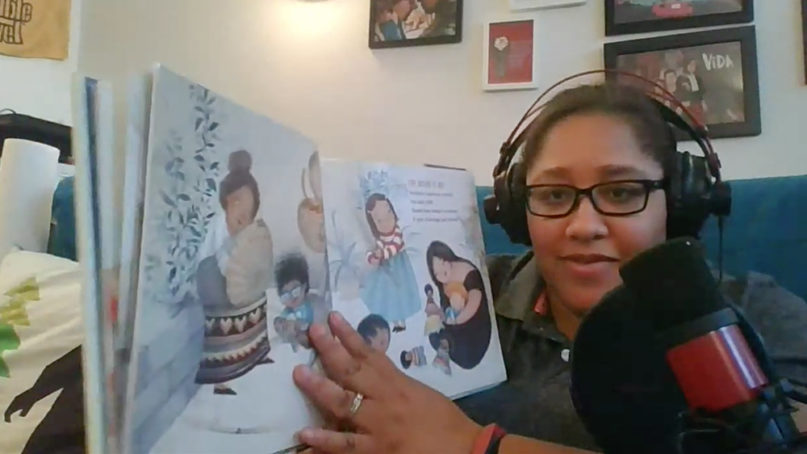 Despite those challenges, it’s important to help kids stay connected with their friends at church and remember their church loves and cares about them, said Natalie Hart, author and director of children’s ministry at Grace Christian Reformed Church in Grand Rapids, Michigan.

It’s also important to support parents, now tasked not only with schooling their children, but also with their spiritual formation.

“Parents are having to come up with everything all of a sudden. We want to give them something — at least options,” she said.

When the stay-at-home orders began in Michigan, Hart went “gangbusters,” she said.

She made Facebook Live videos for the 60 or so kids who attend Grace. In one, she demonstrated how to make an oil lamp out of a clementine while sharing the biblical story of Hagar, who named God “the One who sees me.”

She sent emails to parents full of links to resources they could use with their children.

But as Hart checked in with families at the church, she realized how stressed and overwhelmed they were as parents juggled working from home and home-schooling their kids.

The most clicked link she had emailed to parents wasn’t to any of the resources she had shared, but to a website called ScreamIntoTheVoid.com. The website invites users to type out their feelings, then click a button to watch them disappear into a black hole, accompanied by a screaming sound effect.

So Hart scaled back what she was offering.

She still records children’s messages for Grace’s Sunday services. The congregation has also taken part in drive-by birthday celebrations for a number of kids who attend the church.

And every week she emails out — or prints and drops off — the familiar children’s bulletin that youngsters received every Sunday at Grace. Most weeks, she also sends a coloring sheet that relates to the children’s message.

“Families have been appreciating anything that still can feel like normal to their kids. It’s a bridge between the way things were and the weird way things are now,” Hart said.

St. Paul’s Episcopal Church in Winston-Salem, North Carolina, has been hosting a Parents After Dark on Zoom for the parents in its congregation.

The Rev. Lauren Villemuer-Drenth, director of children’s ministries at St. Paul’s, called it “a safe place” for parents to talk about their fears and concerns, to share and support each other.

“Parents are overwhelmed,” and a long list of resources “tends to make them choose inaction,” she said.

The Parents After Dark meetings started as time to share about the challenges of home schooling and working from a home full of kids, she said. Since then, she’s introduced topics like making summer plans in uncertain times, helping children with boredom without turning to a screen and practicing faith at home.

Even those conversations have contributed to the Zoom burnout parents feel, according to the director of children’s ministries, and Parents After Dark scaled back from meeting every week to meeting every other week. 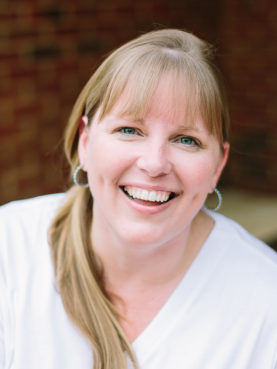 But, Villemuer-Drenth said, “many parents are unsure how to talk about faith, Scripture, and spiritual practices with their children. They want to do it, but feel insecure on how to proceed. They are very grateful to have a partnership with the church, which gives them the tools to do so.”

As hard as it has been for kids, for their parents and for church staff, some pastors have found what they’d consider silver linings to this time.

On Palm Sunday, the Rev. Howard-John Wesley, senior pastor of Alfred Street Baptist Church in Alexandria, Virginia, said more than 200 children logged on to the megachurch’s online worship services targeting each age group, and 12 young people made decisions to “give their life to the Lord.”

“I don’t think you could ask for more than that,” Wesley said.

The Rev. Beth Demme, associate pastor at Good Samaritan United Methodist Church in Tallahassee, Florida, was delighted when one elementary school student from her church reached out to her unexpectedly.

Demme has been sending handwritten cards to a few children each week — each with a silly joke, since she wasn’t sure what else to write. A few weeks ago, she received a card with a joke in response.

It didn’t just make her day, she said. It made her whole week.

“What I was hoping when they got the notes from me was that they would feel like it was a little love note from God — that God had put their names on my heart, that I would remember them,” she said.

Later, Demme received a card from another student with a note about how her family was getting pet rats. She wondered if she’d get to hear those details about congregants’ lives if it weren’t for the pandemic.

Those notes “really ministered to me and reminded me that God … can work through us at any age,” she said. Brian Kaylor, from left, Kagan and Jennifer, with their dog Paprike. Photo courtesy of Brian Kaylor

For Kaylor and his wife, Jennifer Kaylor, playing an active role in their child’s spiritual life isn’t something new.

But it is “definitely a lot different” without a physical community around them, he said.

Their limits on screen time have gone out the window. Hanging in the bathroom, there’s a hand-drawn picture by 8-year-old Kagan of what he imagines the coronavirus looks like — for those moments when their son needs to let out his feelings.

And Kaylor said he’s grateful for it all — especially the social interaction the church provides for his extroverted son.