(RNS) — On a recent Sunday morning, Diana Butler Bass poured herself some coffee, fired up her computer and sat down to go to church.

From her home in Virginia, she logged on to the streaming service at St. Dunstan’s Episcopal Church in Atlanta, where Bass was serving that morning as guest preacher.

The prerecorded sermon went pretty well. But like many church services that happen in person, there were a few hiccups.

“I had a couple glitches in both places,” said Bass, while recounting the service on Twitter. “I spilled some coffee and my sermon got stuck buffering twice.” 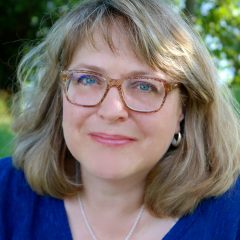 Bass, the author of “Grateful,” “Grounded,” “Christianity After Religion,” “Christianity for the Rest of Us” and other books about religion in America, has spent years studying how cultural and technological change is reshaping religion — and how faith groups can minister amid such change.

Her ideas, like change, aren’t always accepted without a fight.

Butler Bass recently suggested that liturgical churches should find ways to celebrate Communion online.  The COVID-19 pandemic, she said, is giving churches a chance to rethink their worship practices for the future. Rather than being a poor substitute for in-person worship, she says that online worship services can help people find community in a new way.

That’s especially important, as church congregations and other faith groups may not be able to gather together for months, if not for a year. And those who are particularly at risk — the elderly and those with chronic health concerns — may be cut off from worshiping in person for the long haul.

On Twitter and other social media channels, she got a great deal of pushback, with some clergy feeling that she’d accused them of wrongdoing — a claim she denies. Instead, she says, she wanted clergy to remember the importance that Communion plays in the life of church members — especially during a pandemic — and that new technology can help clergy to minister to the spiritual needs of their congregation.

Religion News Service Editor-in-Chief Bob Smietana spoke to Bass this week about online religion and the challenges congregations face in the age of COVID-19.

You caused a stir recently by saying clergy and churches who have decided not to celebrate the Eucharist in person have been withholding spiritual nourishment. Why do you think it’s important to celebrate Communion in an online community?

One of the points I’m trying to make is that what’s happening right now is really challenging our understanding of the nature of time and space. We have traditionally thought that God is beyond time and God is beyond space. But when you gather together and you do these certain prayers in a particular time and space, then God shows up. I’m saying, well, yes, God does show up in those things, but maybe God shows up at other times as well.

What challenges has this pandemic posed for churches, especially liturgical or more traditional churches?

There was a very powerful interview between Bill Gates and Ali Velshi on MSNBC about two weeks ago. In the course of the interview, Gates said about 15 years’ worth of internet adoption has taken place in the last two months.

I’ve been thinking about that. Some churches already have great hesitancies about technology. I mean, there are churches that, you know, still use VCRs in their children’s programs. Most congregations where I speak, mainline congregations, they don’t have screens in the church. They are already very reluctant technology adopters. They have had to do about 30 years’ worth of technological shift in a two-month period. That’s made them a bit exhausted, and I think it’s made them cranky. They can’t avoid these questions about technology anymore.

There’s a quip that I used to use in lectures: “Reality isn’t what it used to be.” And no matter how much I said that in rooms full of church leaders, they didn’t really get it. They didn’t think it was true. I suspect that they believed that things would just continue to be exactly as they were.

Let’s talk specifically about Communion. There are already some ways that people — like shut-ins — can receive Communion, even if they can’t be present during worship services. Could online Communion be an extension of that?

Think about the fact that when the pope is presiding over a gigantic event in a stadium and maybe, there may be 50,000 to 70,000 people inside the stadium. But there is only one Pope standing up, one table. The Pope is not touching 100,000 hosts.

So if the consecration can reach to the upper deck of a football stadium in real life, why can’t the consecration reach across the internet? That’s the question that people don’t want to answer.

I think these denominations have avoided these questions for so long that they tend to think about the internet like it’s television. Back in the 1970s, some of these questions came up: If you do a television Eucharist does it have any effect? Does it count? If you watch the Eucharist on TV at Easter time, was it as spiritually as effective as going to a church?

Pretty much all the denominations have said no. I get that because television is not the internet. Television is literally a one-way medium — where we’re passive. People sat in a room isolated from one another and literally watched content that was being delivered to them. It is an entertainment delivery system.

But these new technologies have extraordinary capacity to create community, to connect people, to set up moral frameworks in which people make decisions about the actions they’re going to deploy in their own lives. This is what denominations have not yet gotten their minds around.

Where does your passion for this topic come from?

My passion comes from this: I believe so much in these kinds of ritual celebrations and in the power of God to show up in this communal meal and that it can create healing and hope and creativity and all these wonderful things that we most need right now. We have the technology to do it. And yet the church is refusing to use it.

Please stop thinking that this is 1952 and that the internet is a television set. Please understand that this technology gives us the capacity to do something that our ancestors never imagined we could do and take the freedom to do it.

That’s a whole separate question that has to do with laypeople consecrating the elements. I am not talking about that. What I think needs to happen is that you would have a priest consecrating elements. The priest or minister stands there with bread and wine, does the prayers of consecration and asks the people who are streaming the service to have elements at hand — crackers and grape juice, bread and wine.

What happens is that the people in the community hold up their own bread and wine while the priest is saying the prayers of consecration. The internet becomes a medium that connects the community.

I’m not saying, you know, everybody just goes out and grabs your Cheetos and your diet Coke and does whatever the heck you want. I am making a conservative argument that the clergy are necessary, one that is well in line with the current practice. I do not really functionally see much difference in people gathered in a room in one space and time and people gathered beyond a room over the internet.

One creates community that we know from experience, the other creates a kind of community less familiar. But they are both community.

Even if you decide, well, we won’t use a common cup, we’ll use those little individual cups on trays. Well, you can’t pass the trays down the pew — people are going to be sitting six feet apart, alone or in little family groups wearing masks, not being able to sing, unable to pass the peace. You could actually do more harm by having a hands-on Communion service.

Being back in a building doesn’t begin to solve the problems of Communion and coronavirus. If we have to wait to have Communion until we are all together in the same physical location, it opens a host of new problems. There will be no Communion until there is a vaccine. Everything else — except virtual celebration — is a risk.