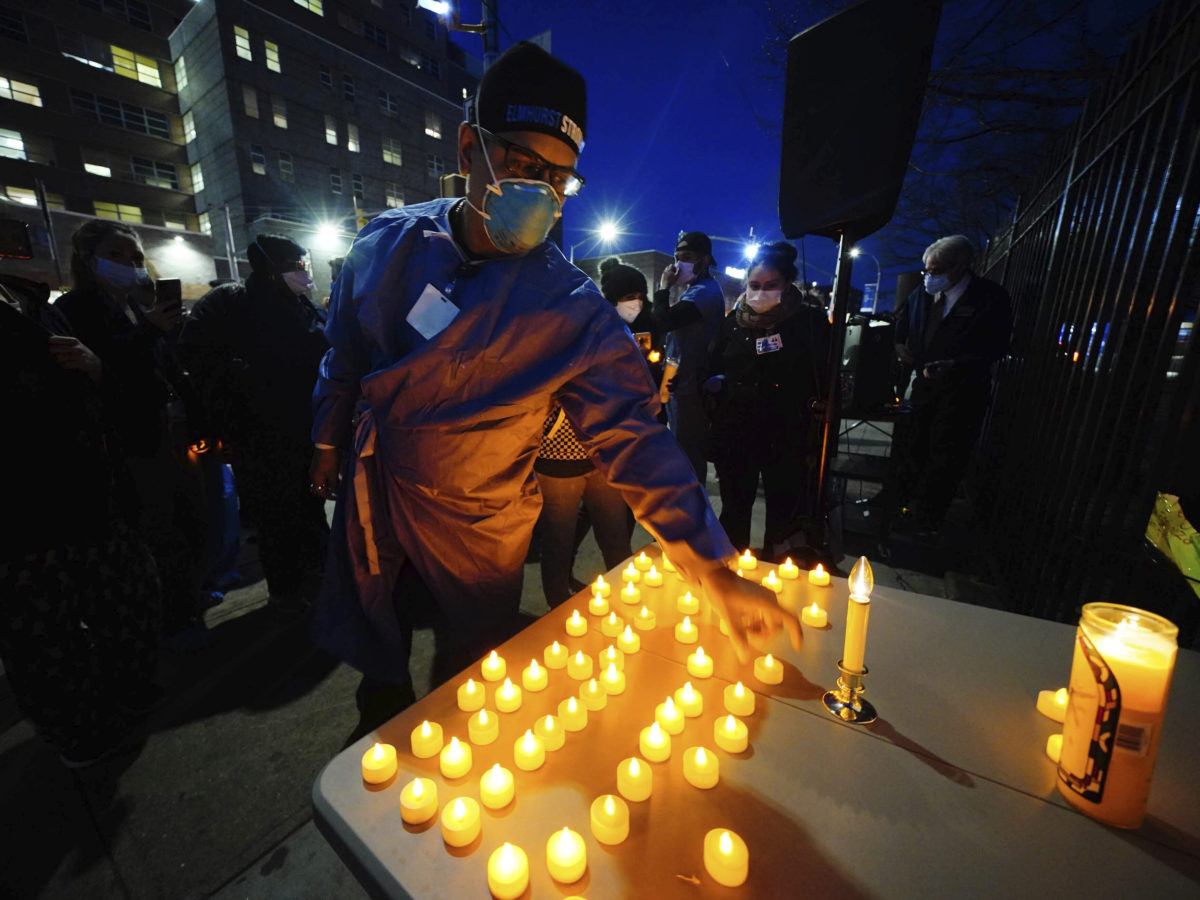 Health service workers light candles at Elmhurst Hospital in Queens, New York, in mid-April. The #NamingTheLost vigil will be held for 24 hours online to remain socially distant, beginning at 2 p.m. May 20. Photo by John Nacion via AP
May 19, 2020
Yonat Shimron

(RNS) — Ahead of Memorial Day, which honors the nation’s wartime dead, a coalition of activists from across the country will hold a 24-hour online vigil naming some of the people who have died of COVID-19.

The #NamingTheLost vigil will begin Wednesday (May 20) at 2 p.m. Eastern on Facebook and end at 2 p.m. Thursday.

“By taking 24 hours to read the names of those we have lost, we seek to humanize and honor each person — and those whose names we do not know — at a time when we must be physically apart,” the website for the vigil states.

There is no central database listing the names of the more than 90,000 Americans and 318,000 people globally who have died. So vigil volunteers have culled more than 10,000 names from obituaries and Facebook memorial pages. Volunteers will recite those names in between readings, songs and prayers. A list of at least 500 nursing homes where individuals have died will also be named.

“Historically, we might turn to our government or people in power or authority to lead us through a national mourning process,” said the Rev. Jennifer Bailey, executive director of the Faith Matters Network who is among those volunteering for the effort. “In the absence of that leadership and guidance, it’s up to everyday citizens, as it often is, to create that space.”

Multiple religious and civic groups, including Auburn Theological Seminary, Bend the Arc Jewish Action, the Sierra Club and the Women’s March, have helped publicize the vigil on social media. The vigil is mostly U.S.-centered, but volunteers from the United Kingdom and South Korea have also been enlisted to help read names during the wee hours of the night in the U.S.

Marathon naming vigils are not uncommon. Groups have organized to read the names of those who were killed during the Holocaust or who died during the 9/11 terrorist strikes.

Bailey, who is African American, said there’s a particular resonance to reading the names of people who have been overlooked or lost to history.

“I can’t name my family lineage past two or three generations,” she said. “To me, memory and the speaking of names is one of the greatest antidotes to death. There is something poignant in this moment to taking up that age-old practice of speaking our ancestors back into life. It ensures they are not forgotten and that their memories will continue to be blessings to us.”

Carinne Luck, a Brooklyn-based organizer, said the focus on reopening society after the shutdown got her interested in helping organize the vigil.

“Here we are talking about how we move forward as a country without even honoring the memory of people who have died and without taking into consideration what’s at stake,” said Luck. “We’ve disappeared  thousands of people. We’re reappearing them and saying, ‘We can’t move forward without first acknowledging all the people who have been harmed and hurt and what that means for us.’”

Esteban Rodriguez-Alverio, an artist who lives in New York’s Bronx borough, said he and his wife signed up to read names after seeing notices attached to the mailboxes of the people in his apartment building who have died of COVID-19.

“At first it was one or two. Now it’s three or four in my building,” said Rodriguez-Alverio, who will add his neighbors’ names at the 5 p.m. slot on Wednesday. “It’s heartbreaking to know that you can’t be there in person or grieve with your family members because of social distancing.”