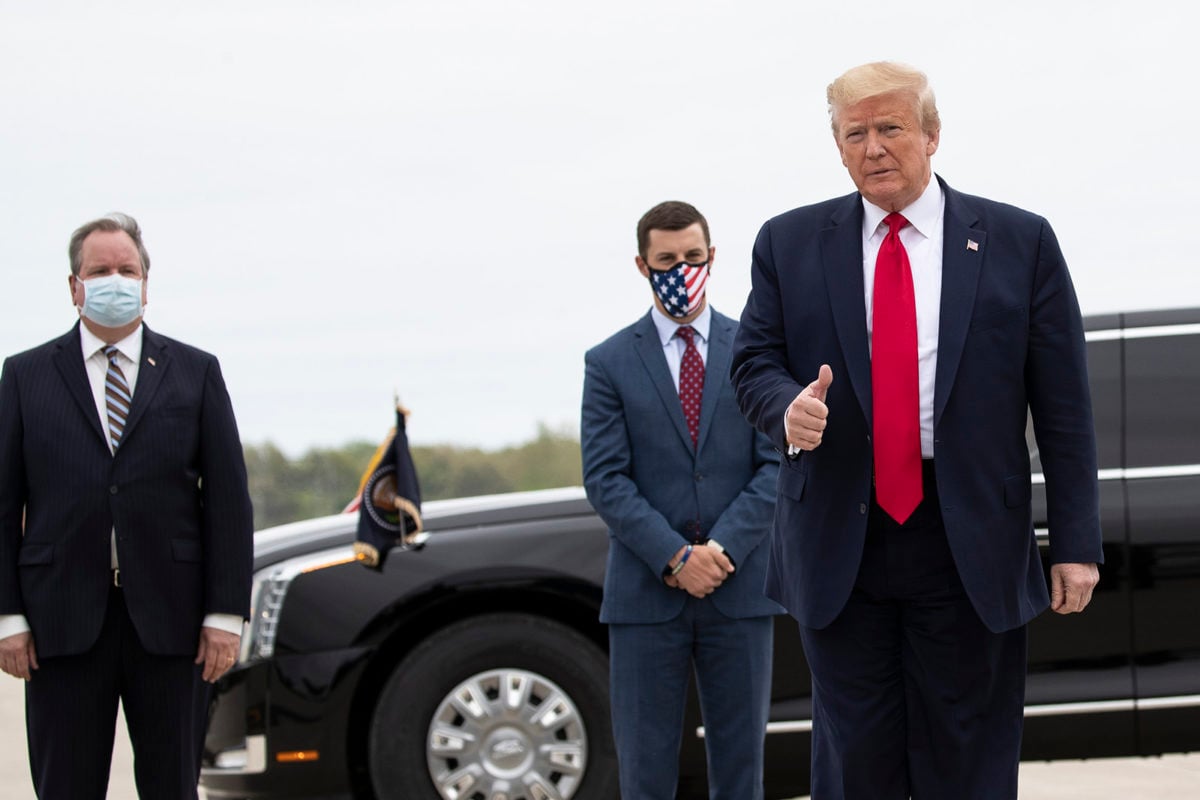 President Donald Trump gives thumbs up after stepping off Air Force One as he arrives at Detroit Metro Airport, behind him are Kurt Heise, left, Supervisor of Plymouth Township, Mich., and Speaker Lee Chatfield, of the Michigan House of Representatives, Thursday, May 21, 2020, in Detroit. Trump will visit a Ypsilanti, Mich., Ford plant that has been converted to making personal protection and medical equipment. (AP Photo/Alex Brandon)
May 22, 2020
Zeke Miller

WASHINGTON (AP) — After refusing for weeks to release reopening guidance for churches, the Trump administration on Thursday abruptly changed course — with the president saying he had instructed health officials to put the advice out.

While visiting Michigan, President Donald Trump said he had discussed the issue with leadership at the Centers for Disease Control and Prevention.

“I said ‘You better put it out.’ And they’re doing it,” Trump said at a Ford Motor Co. plant repurposed to make ventilators in Ypsilanti Township. “And they’re going to be issuing something today or tomorrow on churches. We got to get our churches open.”

More than a month ago, the CDC sent the Trump administration documents the agency had drafted with specific steps different types of organizations could follow as they gradually reopened. The advice was for seven types of organizations, including schools, restaurants and religious facilities.

Those drafts included detailed information for churches wanting to restart in-person services, with suggestions including maintaining distance between parishioners and limiting the size of gatherings.

The Trump administration initially shelved all the documents, but they were obtained by The Associated Press and other news organizations. Some health leaders criticized the move, saying organizations need as much science-based guidance as possible as they try to reopen without sparking new outbreaks.

Guidance for the six other types of organizations was released last week and this week, but administration officials had said none would be forthcoming for houses of worship.

Last week, a Trump administration official speaking on condition of anonymity said there were concerns about the propriety of the government making specific dictates to places of worship. And Roger Severino, director of the Office for Civil Rights at the Department of Health and Human Services, argued that “protections against religious discrimination aren’t suspended during an emergency."

But on Thursday, Trump painted a different picture, suggesting he had prodded CDC to put out guidance to help churches reopen.

“We’ve got to open our churches. People want to go in,” he said.

After the AP reported on the draft guidance for faith organizations, Russell Moore, president of the Southern Baptist Convention’s public policy arm, praised the CDC’s advice as “informative without being heavy-handed.” But as the guidance was withheld, churches in several states proceeded with plans for reopening while many others remain closed.

Maggie Siddiqi, director of the faith initiative at the liberal Center for American Progress, said the delay reflected political concerns within the administration that make for a “confusing and problematic” posture. Siddiqi's group is recommending that no houses of worship reopen.