VATICAN CITY (RNS) — During a Mass this Sunday (May 31) celebrating Pentecost, when Christians believe the Holy Spirit descended on Jesus’ apostles, Pope Francis called on faithful to be bringers of unity at a time when the world seems rife with division.

Francis celebrated Mass before a small number of Catholic faithful, who were wearing masks and respecting social distancing measures within St. Peter’s Basilica. This weekend the pope celebrated the first public events since the beginning of the pandemic, which took over Italy and the Vatican in early March.

In his homily, Francis drew from the gospels to explain the differences among the twelve apostles. They “were from different backgrounds and social contexts,” and all of them “had different ideas and sensibilities,” the pope said.

“They were all different. Jesus did not change them; he did not make them into a set of pre-packaged models. No. He left their differences, and now he unites them by anointing them with the Holy Spirit,” Francis said.

“With the anointing comes their union — union in diversity,” he added.

To faithful in the United States, this message comes at a time of deep fracture and division as riots and protests continue following the death of George Floyd on Monday (May 25). A viral video recorded his final moments where a white police officer, Derek Chauvin, is seen pressing his knee into the neck of an unarmed Floyd.

The event stirred the already unstable dynamics surrounding race in the United States and heightened division in the country. 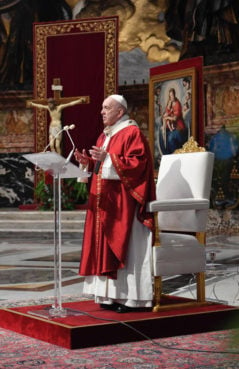 Pope Francis celebrates a Mass for Pentecost, Sunday, May 31, 2020, in St. Peter’s Basilica at the Vatican. Photo by Vatican Media

“We, too, have our differences, for example: of opinions, choices, sensibilities,” Francis observed on Sunday. “But the temptation is always to fiercely defend our ideas, believing them to be good for everybody and agreeing only with those who think as we do. This is a bad temptation that brings division.”

According to the pontiff, “so much more” unites people than beliefs or morality. “Our principle of unity is the Holy Spirit. He reminds us that first of all we are God’s beloved children; all equal, in this respect, and all different,” he said.

As the representative of the universal Church, sprawled all over the world, Francis’ comments cannot be ascribed to the experience of a single country or state. The structure of the European Union, which showed signs of weakness when the United Kingdom exited the union, has stumbled further under the demands for cooperation required by the COVID-19 pandemic.

“Let us begin anew from here; let us look at the Church with the eyes of the Spirit and not as the world does. The world sees us only as on the right or left, with one ideology or the other; the Spirit sees us as sons and daughters of the Father and brothers and sisters of Jesus. The world sees conservatives and progressives; the Spirit sees children of God. A worldly gaze sees structures to be made more efficient; a spiritual gaze sees brothers and sisters pleading for mercy,” Francis said.

“The Spirit loves us and knows everyone’s place in the grand scheme of things: for him, we are not bits of confetti blown about by the wind; rather we are irreplaceable fragments in his mosaic.”

The pope’s words are also relevant for the divisions that exist within the Catholic Church itself about doctrine, inclusion, social justice and activism. Francis warned of the danger in relegating faith matters to “upper rooms” in the Church, which becomes “a nest instead of a community, a family or a Mother.”

He pointed to “narcissism, victimhood and pessimism” as the main enemies of a faith that views God as imposing his will and authority over individuals. God offers himself as a gift, the pope said, and, by emulating that, Catholic faithful can help foster unity and peace.

“The Spirit himself opens doors and pushes us to press beyond what has already been said and done, beyond the boundaries of a timid and wary faith,” Francis said.