(RNS) — Last week I resigned from Liberty University online after the university’s president, Jerry Falwell Jr., announced on Twitter that he had designed a face mask decorated with a photo of someone wearing blackface standing next to another individual wearing a KKK robe.

I am a Black man. I am a Pentecostal pastor. I am a professor and scholar. When a friend and Liberty alumna, a Black woman and a fellow Pentecostal minister, forwarded me screenshots of those tweets, I sent a letter of resignation immediately.

Falwell offered an explanation in a following tweet. His mask, he said, was made in response to Virginia Gov. Ralph Northam’s mandate for all Virginians to wear masks in public indoor places to help flatten the curve of COVID-19 infections, after Falwell had been criticized for flouting warnings to close his campus.

“Just so folks outside of Virginia unfamiliar with the pic on the mask understand,” Falwell wrote, “it is from the personal page of the medical school yearbook of @GovernorVA. Just a way to shine a light on the fact that Democrats are and always have been the real racists in the country.”

Let’s get this straight: On the very same day that video of George Floyd being killed on the street by a white police officer went viral, even as we barely had processed a video of a white woman making false allegations on a 911 call against another Black man, Christian Cooper, in Central Park, Falwell announced he planned to walk around with a photo of blackface and a KKK robe on his face.

Both of those racially charged incidents had come days after video emerged of Ahmaud Arbery being hunted down and killed like an animal by two white men as he was jogging through a Georgia neighborhood.

Despite his explanation about the Democratic Party, Falwell’s use of anti-Black images was not to create honest dialogue about the history of race and racism in America, regardless of whose face may have been under the black paint or under the Klan hood in the photo.

In my 2017 essay “Remembering Jim Crow in the Age of Trump,” I described the rhetorical functions that blackface characters and other anti-Black imagery served in the white racist imagination. These racist images were created first and foremost by elite whites for white consumption and served one purpose: the preservation of the white supremacist racial hierarchy.

These artifacts were then strategically created, disseminated and reproduced to perpetuate a justification of slavery, the legalization of Jim Crow segregation and its violent racial terrorism that was poured out on us.

Elite white males’ power to manipulate and appropriate racist images and symbols was a prime tool in shaping society’s prevailing ideas about who and what Black people were — from chattel, to subhuman, to three-fifths human, to lazy, to violent, menacing, sexual predators of white women, to Black women with sexual proclivities that posed a threat to white society.

Yet, by the turn of the 21st century, nearly half of all collectors of anti-Black artifacts were Black people, as many African Americans began to reclaim and re-present these objects as an act of resistance, telling a more honest story of America’s racial past. They now stand as evidence to a deep, dark history of physical, emotional, spiritual, and psychological violence that African Americans endured from the time of enslavement to the Jim Crow era.

Today, the largest public collection of anti-Black artifacts is owned by David Pilgrim, the African American founder and curator of the Jim Crow Museum of Racist Memorabilia at Michigan’s Ferris State University. Pilgrim’s goal is “to use objects of intolerance to teach tolerance” and to promote social justice through honest conversations that challenge a trivialized public memory of America’s racial past.

When done right, racist images can foster what the Rev. Kelly Brown Douglas calls “moral memory.” In her 2015 book “Stand Your Ground: Black Bodies and The Justice of God,” Douglas argues that moral memory demands that we recognize how our systems, structures and ways of being in society are a continuation of the myths, the narratives, the ideologies of the past, and that we then transform our present reality.

Re-presentation of anti-Black images has long been part of the African American resistance toolkit for achieving this. A hundred years ago, Ida B. Wells-Barnett re-presented lynching photos in the service of social justice, Black personhood and Black freedom, arguing in her own way that Black Lives Matter.

This Falwell did not do. Falwell used anti-Black images in a public spat with the governor of Virginia, at the expense of Black people. For Falwell, the images were a Halloween costume he would simply remove when he was done with his political fight. He would never stop to consider the enduring, often violent consequences of the photos.

Falwell will never have to be concerned about ending up dead after being stopped by a policeman. His actions will never be interpreted through the lens of the historical caricature “Sapphire,” the angry Black woman, because he asserted his rights to a white officer as Sandra Bland did.

What is true for Falwell is not true for my Black sisters.

Falwell will never have to be concerned about being shot dead on the street while wearing a hoodie because someone patrolling the Retreat at Twin Lakes gated community thinks he “looks suspicious” and “out of his place,” as George Zimmerman did to Trayvon Martin. Falwell’s body will never be interpreted through the stereotype of the “Black Brute,” or that of the menacing Black man that became the public rationalization for Klan violence.

What is true for Falwell is not true for my Black brothers.

Black churches continue to be spaces of refuge for so many of us who endure daily the relentless assault on our Black identity. To hear our names called aloud by our pastors as we are buried with Jesus in baptism is for us more than an ordinance. The calling out of our names in the waters of baptism links our names with the divine and is an act of resistance because it identifies us with God.

This practice and others found in Black churches stand against all images, ideologies, beliefs and actions that support the lies of white supremacy that render Black people as anything less than divine image bearers. 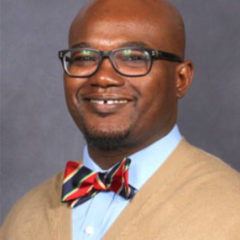 My Black body matters enough to me to have made it known by my exit from Liberty!

(The Rev. Christopher A. House, Ph.D., is a Pentecostal pastor and an associate professor of communication studies at Ithaca College. The views expressed in this commentary do not necessarily reflect those of Religion News Service.)