(RNS) — President Donald Trump’s walk across from the Rose Garden to St. John’s Episcopal Church on Monday (June 1) was a short one in terms of geography, but represented an enormous leap in rhetoric. After claiming he would bring “law and order” back to the United States and declaring himsef an “ally of all peaceful protesters,” he marched across a Lafayette Square that police, using flash grenades and tear gas, had forcefully cleared of peaceful protesters. Outside the church, Trump held up a Bible for a photo-op. When asked if the book was his own, Trump replied that is was “a Bible.”

How do we square Trump’s authoritarian rhetoric with a photo-op in front of a church he did not enter, holding a Bible he did not seem to own, after not speaking to any clergy?

The answer is Christian nationalism.

As Sam Perry and I explain in our new book, Christian nationalism is “a collection of myths, symbols, narratives and value systems” that idealize and advocate for a fusion of Christianity and American civic life. Americans who embrace these notions believe the United States always has been, and always should be, distinctively Christian in its public policies, sacred symbols and national identity.

While Christian nationalism clearly draws on religious symbols — Bibles and churches, for instance — our work also shows that it is strongly associated with authoritarian control, militarism, nativism and even white supremacy.

Americans who embrace Christian nationalism, a majority of whom are white, want a Christianity predicated on power over others to hold a place of privilege in the public sphere, and many see in Trump the best way to guarantee it. Trump has consistently promoted himself as a strongman, the only one who can save “us” from “them.”

The personal piety of the strongman who ensures their safety matters little. Christian nationalists don’t need Trump to open the Bible, read it, recite it, pray or enter a church. What they want and need is someone who they feel sees them and endorses their particular vision for the country; someone who will provide access to the levers of power — the federal bench, for starts — so  they may transform the culture after their own image.

Consider the chart below, on which respondents’ views are compared to how they rate on a Christian nationalism scale (based on their responses to six questions about Christianity, separation of church and state, and school prayer). We asked Americans whether they agreed or disagreed that: “We must crack down on troublemakers to save our moral standards and keep law and order.” Fewer than half of Americans who are low on the Christian nationalism scale agree with this statement. But as Americans’ scores increase on the scale, they are much more likely to agree with this authoritarian sentiment. Percent of Americans who agree that “We must crack down on troublemakers to save our moral standards and keep law and order” by Christian nationalism. Graphic courtesy of Andrew Whitehead

For this reason, authoritarian measures such as mobilizing the United States military against its own citizens or tear-gassing peaceful protesters, including clergy, are perfectly welcome. Those who embrace Christian nationalism believe that God desires the United States to be Christian, as they define it, and this end should be achieved by any means necessary. If God wills it, after all, who are we to resist?

It’s important to recognize that the rhetoric of “cracking down” on “troublemakers” is suffused with racial implications. Social scientists demonstrate that these phrases began to emerge in the 1980s in reference to inner-city black Americans. In our book and in other research we show that those who sympathize with Christian nationalism are much more likely to agree that “police shoot blacks more often than whites because blacks are inherently more violent than whites.”

Precisely because the current protests are responding to state-sanctioned violence toward black communities, we can expect that if Trump’s promised shows of force primarily fall upon communities of color, white Christian nationalists will not only approve of these actions, they will deem them necessary. 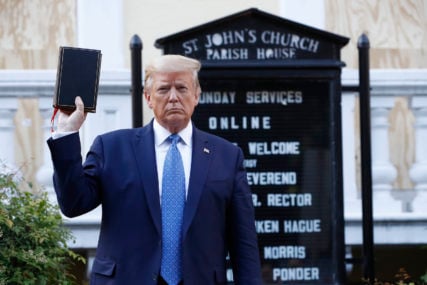 In our book we write that Americans who strongly embrace Christian nationalism, whom we call Ambassadors, are “more likely to believe that the country would be better off if that ‘other side’ ceased to exist. Strong Ambassadors considered the ‘other side’s’ vision of the country completely bankrupt and to be opposed by any means necessary. Strong support for Christian nationalism demands complete allegiance and ultimately desires the silencing and exclusion of its opponents from the public sphere.”

Viewed this way, authoritarianism is certainly not a bridge too far for Christian nationalists. Rather, it is a necessity for enacting and enforcing their political goals.

So we can expect Trump to continue to use Christian symbolism to signal to this American subset that he sees them, hears them, is on their side and will forcefully impose their exclusivist political vision. And it will not be in spite of Trump’s authoritarian rhetoric and actions that many white Christians will support him. It will be because of it. And his reelection depends on them.

(Andrew Whitehead, an associate professor of sociology at Clemson University, will soon move to Indiana University-Purdue University of Indianapolis and the Center for the Study of Religion and American Culture as an associate professor of sociology. His new book, co-authored with Samuel L. Perry, is “Taking America Back for God: Christian Nationalism in the United States.” The views expressed in this commentary do not necessarily represent those of Religion News Service.)