“The coronavirus aggravated social inequalities and caused an alarming increase in poverty,” Palombo, an artist and activist for 25 years whose works are showcased in museums worldwide, told Religion News Service. Milan, in northern Italy, was among the hardest hit by the coronavirus pandemic starting in February.

“The health pandemic has become a social pandemic,” he added.

The two works, titled “Caritas” (the Latin word for Charity), represent Pope Francis and the Virgin Mary in different settings begging for money with a crumpled Coca-Cola cup. The artist said his inspiration stemmed from seeing many people in Milan being forced to live on the streets due to the economic consequences of the pandemic. Over 1.5 million people are registered as unemployed in Italy, according to the Italian statistics agency Istat. 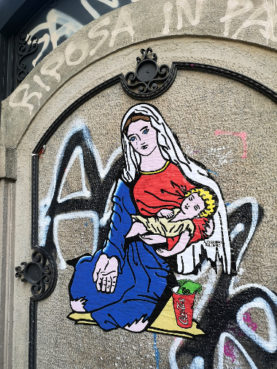 “I couldn’t remain indifferent in the face of this social disaster,” Palombo said.

With a message centered on concern for the poor and mercy, Pope Francis made for the perfect symbol for street art, Palombo said.

“He is a pope who is close to the people, and the street is the best place to communicate and be with the people,” he added, stating that Francis is charged with the difficult task of addressing the Christian message to today’s “hedonistic” and “self-centered” society.

According to the artist, “poverty in the world is spreading much quicker than the coronavirus,” and strong and decisive action is required to fight social inequality and avoid “injustice and social revolts.”

Palombo’s aunt was a mother superior at a convent in southern Italy, where the artist spent a lot of time as a child. Even though he is not a practicing Catholic today, his experiences at the convent “deeply influenced” his life and he said he identifies with Pope Francis’ call to “simplicity and condemnation of waste.”

He came up with the idea of the works during the lockdown in Italy (which began on March 9) and immediately got to work on them once the country entered phase two, allowing citizens to leave their homes.

Palombo chose to place his art in areas where he knew many homeless live in Milan. 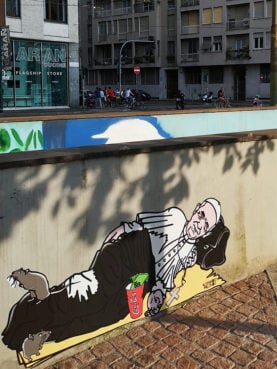 “I wanted to bring Pope Francis among them,” he said, adding that while working on the pieces he also got to know many of the homeless and poor who live on the city’s streets.

“They are people in need of attention. Silence and indifference kills them” Palombo said, adding that the homeless said institutions did very little to support them during the lockdown and quarantine.

“I was touched by their happiness when they saw the work of Pope Francis,” he said. “Many moved their personal belongings to sleep close to the works.”

The homeless’ appreciation for the pieces was also evident when the graffiti were vandalized, and they used carton boxes and blankets in an attempt to protect the pieces. Pictures taken by passersby have also served as a means to raise awareness by showing Francis begging side by side with the homeless.

“In a difficult time such as the one we are living in, addressing the problem of poverty is even more important because we will only start again if we build the conditions for a better world,” Palombo said. “The world before COVID was unsustainable. Today we must make a collective effort for an equitable future that leaves no one behind.”

This is not the first time the Italian street artist has made headlines with his thought-provoking art. His previous collection “Just Because I Am Woman,” which showed female political leaders as victims of gender violence, is currently on display at the National Manifesto Museum in Denmark.

His work “Survivor,” which highlights breast cancer awareness by portraying Marge Simpson, is showcased at the Civilization Museum in Quebec, Canada, while his series on Disabled Disney Princesses went viral on social media.

“The human person must be at the center of everything. That is why I chose to portray Pope Francis because his commitment and effort toward the weakest is an example for all,” Palombo said.

“Only when we reach out our hand toward our neighbor and turn our gaze to the weakest will we be able to call ourselves human.” 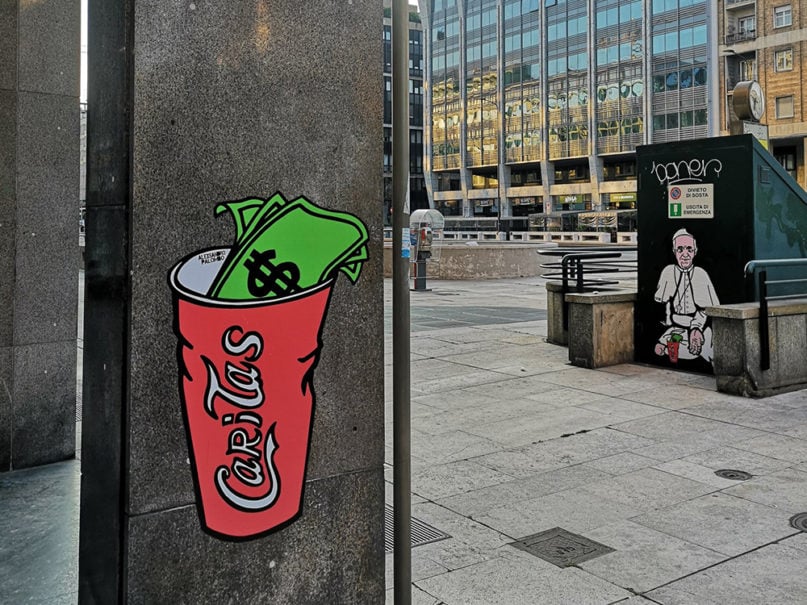