(RNS) — When I was in grade school, I wrote a report on the Loch Ness Monster. My take: Nessie was actually a dinosaur, a plesiosaurus, proof of a young Earth creationist viewpoint that the Earth was merely 6,000 years old. I made a model plesiosaurus out of wood and proudly presented it to my homeschool group.

Growing up, I enjoyed engaging in stories like this. I also believed in UFOs and Sasquatch, and conspiracy theories mostly seemed fun and harmless.

Looking back, I realize I was exposed to a lot of conspiratorial thinking in my white evangelical world, even if we didn’t call it that. Climate change — a hoax perpetrated by liberals hell-bent on curbing economic progress. Vaccines — not to be trusted. However, the end of the world and the return of Jesus would be ushered in by a one-world government after Democrats elected the antichrist as president.

Do these stories sound strange? Smart, thoughtful, faith-filled people I knew talked about them constantly. It was exciting to think that every decision we made was important in the cosmic scheme of the world. We were among the few who knew the truth. Yet if I peel back these narratives now, I see the widespread damage that has come from perpetuating them.

Currently, conspiracy theories are popping up all over my social media feeds, many of them shared by conservative-leaning Christians. New 5G cellphone towers are to blame for the novel coronavirus. COVID-19 is a plot by Bill Gates to force us all to buy a vaccine from Big Pharma.

Psychologically, these stories make sense. Our brains are wired to be on the lookout for danger, seek out simple solutions and minimize complexity. It’s easier for some of us to believe COVID-19 is manmade or that the culprit is a well-known billionaire than to think about a world in which a horrific virus with no known cure has altered life as we know it.

As a white evangelical I was raised on a steady media diet of mistrust of the federal government, but it didn’t stop there. Novels such as Frank Peretti’s “This Present Darkness” pitted a small group of God-fearing folk at war with demon-possessed academics and newspaper editors, police chiefs and executives running multinational corporations. Published in the 1980s, the book was a hit in the Christian market and paved the way for more well-known works like the classic End Times series, “Left Behind.”

In a recent podcast series for the CBC, journalist Lisa Bryn Rundle explores the Satanic Panic of the 1980s and ’90s, showing how mass hysteria contributed to the belief that satanic cults were preying on children throughout North America. A few decades removed, it is hard to believe that people were jailed for allegedly horrific acts with zero evidence. At the time, even questioning the prosecutorial methods was to admit you didn’t believe the alleged young victims and would open you to being accused yourself.

Rundle highlights former FBI agent Ken Lanning, who worked specifically in cases dealing with sexual abuse against children. Familiar with the real risks toward children, he became suspicious of the sheer number of people supposedly involved, concluding that it was statistically highly unlikely.

Children were being abused, of course, just not in the ways the media was reporting. We preferred a conspiracy theory to the complicated, and sadder, reality.

Lanning points out that when X-rays first became common in the 1960s, so many children were showing signs of broken bones that radiologists thought they might have discovered a new degenerative disease. It took a while for both the scientific community and the culture at large to catch on to the truth: that many children suffered violence at the hands of their caregivers.

It still happens more than we want to admit. To this day, we more often hear of “stranger danger” when in reality, 93% of sexual abuse against children happens with someone the child is related to or who is a trusted family friend. This is how conspiracy theories do their damage, by pulling us away from the real problem and the more complex but lasting solutions.

COVID-19 presents a challenge for people like me who grew up in communities where conspiratorial thinking was normalized. The current global pandemic has no easy villain or easy solution. The pull is there, and we will have to work hard in the coming days to ensure these theories do not end up harming vulnerable communities.

For example, if white, highly educated middle class women lead the charge on resisting vaccines for COVID-19 (statistically they are the most likely demographic to be anti mandatory vaccines), then those with real health risks and an inability to be vaccinated will be put most at risk for contracting the deadly disease.

Writers like Joshua Pease remind us that many more Americans believe in conspiracy theories than we might think (in a 2019 survey, 49% of Americans did not believe in the safety of vaccines, for instance — be prepared for this to be a big conversation in the months and years to come).

And in many ways it makes sense, precisely because it is proven that the powers that be often don’t have our best interests in mind. Indeed, conspiracy theories’ power often comes from the fact that they contain a grain of truth. But extracting that truth is part of our job as rational beings. To not engage in conspiratorial thinking does not mean one wholeheartedly agrees with the government. Instead, it means doing the hard work of understanding our own biases, our desire for simplicity and the tendency to want to ignore hard truths about our communities. 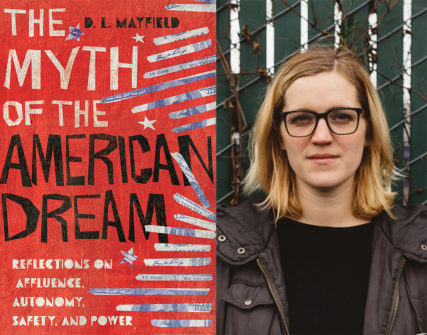 “The Myth of the American Dream: Reflections on Affluence, Autonomy, Safety, and Power” and author D.L. Mayfield. Courtesy images

Now, more than ever, it is time for white evangelicals like myself to reckon with how conspiratorial thinking has impacted our theology, pop culture and the ways we engage in politics. Only then will we be able to truly start to combat the oppressive forces and systems that disproportionately marginalize some while protecting others: then and only then will we start to be obedient to the words of Jesus, who called us to love every neighbor as ourselves.

(D.L. Mayfield is a writer and activist who has spent over a decade working with refugee communities in the United States. She is the author of the newly released book, “Myth of the American Dream.” The views expressed in this commentary do not necessarily reflect those of Religion News Service.)