MORIA REFUGEE CAMP, Lesbos, Greece (RNS) — Like many restaurants around the world, Nikos Katsouris has seen his 16-year-old eatery here close due to the COVID-19 pandemic. And while he, too, has adapted to the local lockdown by starting a vibrant delivery service, Katsouris and his partner, Katerina Koveou, have been providing their former customers not their accustomed fish platters but toothpaste, diapers and imperishable groceries.

Since the migration crisis began in Europe in 2014, Katsouris and Koveou have been offering hospitality to the thousands of refugees and migrants marooned on this island in the eastern Aegean Sea, the majority of them after fleeing war in Afghanistan and Syria — mostly by feeding them. The couple’s restaurant, Home for All, just a few kilometers outside of the Moria camp, has been serving fresh fish — like nearly everyone on Lesbos, Katsouris is a fisherman — and other delicacies, not on the ground in a tent but with dignity, at the table. Free meals are prepared for Moria Camp refugees at the Home for All restaurant in Lesbos, Greece. Photo courtesy of Home for All

With COVID-19 spreading in the camp, however, authorities ordered all restaurants to close in mid-March, abruptly ending Home for All’s daily production of up to 1,000 meals. Moria went into lockdown at about the same time. Most of the eight refugees who volunteered at Home for All had to be sent home.

“Only a few days ago, people were sharing food there,” said Katsouris in late March. “And all of a sudden, everybody was stuck in the camp, many of them hungry, in the need of help that I wanted to offer, but I could not, as I wanted to follow the rules.”

Since then, Greece has slowly started to reopen, and a few refugees have gone back to work in the olive groves the couple owns, processing and bottling olive oil.

The work, Katsouris said, is as much a lifeline as the food. “Many people have been in the camp for two, three years. Offering them clothes or food helps, but it’s not as important anymore,” Katsouris said. “We have a lot of olive trees, and if we provide employment for refugees and migrants, they can start a new life.”

Volunteers have also continued delivering meals to families in the camp, a sort of pro-bono takeout while Home for All is closed. Safar Hakimi, a 21-year-old Afghani resident of Moria, said making deliveries fills a need but also relieves the boredom of the lockdown. “There is nothing to do, nothing to study,” Hakimi said.

The restaurant also gave the refugees more than just somewhere to be. “They were giving us exactly what we need. Freedom. When we were going to the restaurant, for a moment we felt like at home,” said Hakimi.

“People stay all day in the camp and they need to feel useful,” Katsouris explained. “It is simply human to have something to do,” 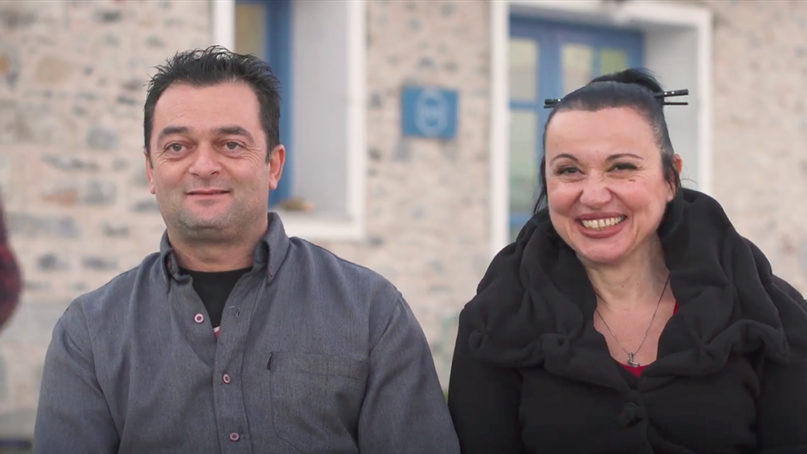 Founded as a profit-making concern, Home for All began feeding refugees for free in 2014. Three years later, the Greek government ordered them to choose whether they were a charitable organization or a business. Katsouris and Koveou have always put everything they have into supporting refugees and migrants, and everything they do is funded from their own pockets or from individual donors. Rather than give up feeding the refugees, they filed to be formally recognized as a nonprofit.

“It is our passion, and a calling. Working with refugees brought us closer to God because we try to help as God says,” said Katsouris, who also delivers food to the local Greek Orthodox church, where, though he rarely attends worship, he still counts himself a member.

Instead, he said, he gives his heart to the people and in exchange, they make him a better person. In his eyes, a relationship with God is about love. 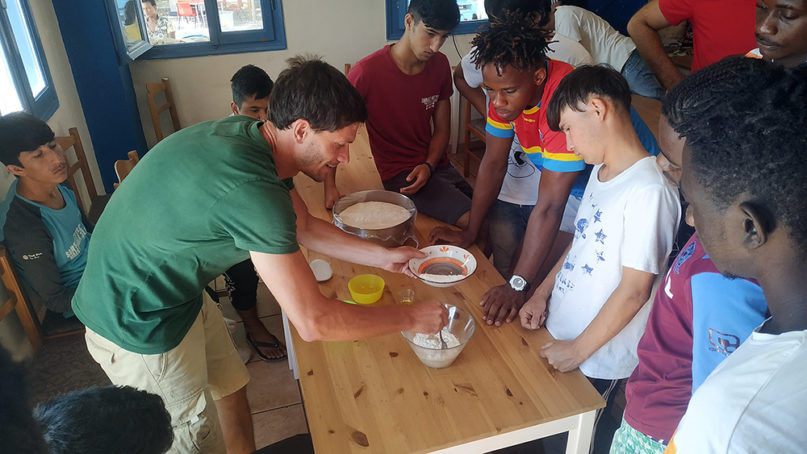 Before the pandemic, males learn how to make pizza dough at the Home for All restaurant in Lesbos, Greece. Photo courtesy of Home for All

Besides feeding both refugees and locals, the restaurant served to bring together the camp’s largely Muslim population and Katsouris’ fellow Christians. Zakira Hakimi, a 24-year-old university graduate from Afghanistan (no relation to Safar), arrived in Lesbos nearly two years ago with her mother. Katsouris and Koveou invited the two women to eat at Home for All and later offered them free housing. Soon Hakimi was volunteering as a translator for people from the camp while helping in the kitchen and making deliveries to the church.

“When the Greek people meet refugees, it changes their mind (about the refugees), because they see that they just came to find a better future,” Katsouris said.

The Moria Camp — designed to accommodate 3,000 people, but now holding some 20,000 — is still closed until June 21, even as Greece begins to open up. Few refugees and migrants are allowed to leave, and no visitors or members of international agencies can enter. Workers load food donations into a truck at the Home for All restaurant in Lesbos, Greece, to be distributed at the nearby Moria refugee camp. Photo courtesy of Home for All

“The hardest was that we did not have enough water to even wash our faces,” said Safar Hakimi. “There is never enough water, but during this time it is tougher because we cannot take care of ourselves, we cannot wash our hands,”

According to Doctors Without Borders, there is one water station for 1,300 people in some parts of Moria. The idea of social distancing also sounds like one from a utopic movie, as people are sharing tents built one next to another. An outbreak of COVID-19 in such conditions would be a catastrophe that nobody wants to witness.

The camp is still a place of unprecedented risk. “The situation is very fragile,” Katsouris said, as is the country itself: Greece has just recently recovered from an extended economic crisis, and is almost sure to enter another one due to the pandemic.

The pandemic, Katsouris believes, should not divide Greeks and their refugee population but bring them together. “Coronavirus is a common problem,” he said. “It is not of refugees or of the locals only.” Katerina Koveou prepares pasta at her Home for All restaurant in Lesbos, Greece. Photo courtesy of Home for All