(RNS) — The Washington National Cathedral announced a 15% reduction in full-time staff on Tuesday (June 16) due to the financial impact of coronavirus. Starting July 1, the cathedral — located in Washington, D.C. — will eliminate 13 full-time positions and 13 part-time ones and will furlough another 12 full-time positions.

The cathedral’s doors have been closed since March 12, preventing tourists and worshippers from visiting during what is usually the 113-year-old neo-Gothic landmark’s busiest time of year. In an email to Religion News Service, Chief Communications Officer Kevin Eckstrom said that while donor support has remained strong despite holding only online services, the cathedral has been unable to rent its buildings and grounds for events, which normally helps underwrite operations.

Supporters of the cathedral, an Episcopal parish as well as the seat of the church’s bishop of Washington, can still contribute to Sunday morning offerings virtually, and the cathedral has expanded the ways people can give, but these contributions haven’t been able to compensate for the lack of funding available during the cathedral’s closure.

The historic Washington National Cathedral’s governing foundation was chartered by Congress as a house of prayer for all people where the country gathers during moments of national significance and for state funerals. But it receives no government support and depends completely on private funding.

The cathedral isn’t the only prominent house of worship experiencing financial challenges as a result of the pandemic.

While the Basilica of the National Shrine of the Immaculate Conception, also in Washington, D.C., has not had to lay off any full-time staff, Monsignor Walter R. Rossi, rector of the basilica, told RNS, “The National Shrine has experienced a significant loss in revenue from our doors being closed.” These losses are largely due to empty pews and empty offering baskets, making it difficult to pay operating expenses.

The basilica has had to increase fundraising and plans to ramp up these efforts as it prepares to celebrate its centennial in September. 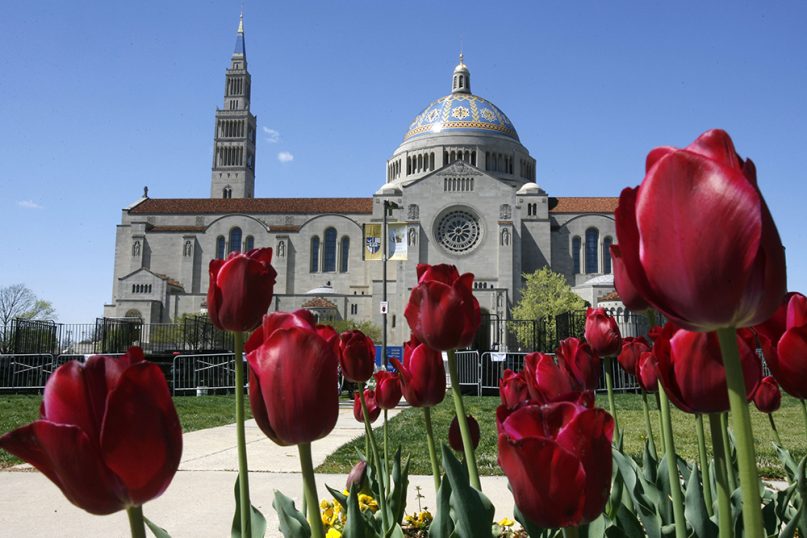 The Basilica of the National Shrine of the Immaculate Conception, next to Catholic University of America, in Washington, D.C. (AP Photo/Jacquelyn Martin)

Trinity Church Wall Street in New York has also been financially impacted by the virus, according to Elizabeth Warnick, chief strategy officer for Trinity, but the Episcopal church does not anticipate any layoffs at the moment, in part because of its endowment and patrimony. The church continues to be involved in a number of outreach efforts on local, national and international levels and hopes to be able to resume in-person services around Labor Day.

In a letter sent to the Washington National Cathedral community, Dean Randy Hollerith wrote “(W)e anticipate that social distancing requirements, public sentiment and concern for the most vulnerable all mean that it may take 12 to 18 months for us to return to pre-pandemic levels (of operation), and perhaps longer.”

In the same letter, Hollerith said the most heavily impacted departments were public engagement, especially tourism and events management. He also announced that the cathedral’s highest-paid employees would take a 20% pay cut, and all employees would see reduced benefits for the next year.

“In my 30 years of ordained ministry, this is the hardest set of decisions I’ve ever had to make,” wrote Hollerith. “(E)ach decision involves painful change for treasured colleagues and friends, and it grieves me deeply.”

Though the staff reductions at the National Cathedral are painful, Eckstrom said the cathedral remains committed to playing a leading role in shaping American religious life. Looking ahead, the cathedral is planning to use its unique position as a sacred and civic institution to bolster responses to both coronavirus and racism.

As part of these efforts, the cathedral has started weekly prayer services naming those who have died from coronavirus.

“We also want to use our position to help the church — particularly the white church — combat racism, with the understanding that African Americans should not be asked to tackle white supremacy,” said Eckstrom. “That’s a task for white people, particularly in largely white churches.”