VATICAN CITY (RNS) — Europe and the United States experienced firsthand the brunt of the pandemic, witnessing its tremendous death toll and impact on society. But some Catholic nuns, on the front lines in helping the poor and vulnerable, described on Tuesday (June 23) the challenges and human cost of fighting COVID-19 in the developing world.

“We didn’t even know where to begin,” said Sister Stan Therese Mario Mumuni, founder and superior general of the Marian Sisters of Eucharistic Love, explaining her experience in northern Ghana.

Mumuni was among the panelists at an online symposium sponsored by the U.S. and U.K. embassies to the Holy See that highlighted the work of female religious during the COVID-19 pandemic.

The nun’s life work has been to protect and care for children born with special needs in Ghana, where they are often murdered because of their disabilities. “Their cry has reached my ears,” Mumuni said. “I cannot stand it again.” 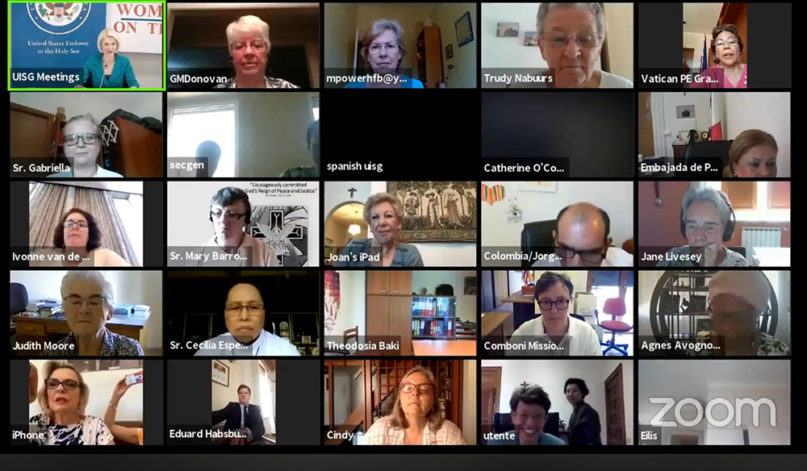 People participate in the online symposium “Women Religious on the Front Lines”on June 23, 2020. Photo courtesy of the U.S. Embassy to the Holy See

The pandemic caught Mumuni and her community completely unprepared, she said. They began hearing on the news that authorities were encouraging people not to leave their homes. Soon after, she received calls from the special-needs school to go and pick up the children.

She was left trying to protect and educate all the children at home but found it difficult to enforce the necessary safety measures to contain the virus. The price of the food at the market skyrocketed to three times the usual price, she said, and they couldn’t afford liquid soap.

RELATED: In Togo, a Catholic nun fights COVID-19 for the sake of her AIDS patients

“With the pandemic, we had to struggle with the little we had to be able to reach out to others to support them,” she said.

Local priests asked the sisters to go and rescue children who were orphaned or abandoned during the pandemic. “We had to risk our life to go save such innocent victims,” she said.

The global lockdown also had a powerful impact on unemployment and poverty rates, especially in developing countries. Mumuni and her community were faced with families tempted by human trafficking in Ghana, where children can be sold for as little as $5. Sister Imelda Poole speaks during the online symposium “Women Religious on the Front Lines” on June 23, 2020. Photo courtesy of the U.S. Embassy to the Holy See

The same reality was described by Sister Imelda Poole, president of RENATE, a nongovernmental organization dedicated to combating human trafficking and exploitation in 31 nations in Europe.

“We noticed a massive explosion of poverty,” said Poole, who represented Tirana, Albania, on the panel. She detailed a sharp increase in hunger, with many families starved as a result of losing their jobs and primary sources of income.

“These are the vulnerable people that traffickers go to immediately during a crisis,” she said.

During the months of lockdown, RENATA moved 80% of its work online, by providing online counseling to human trafficking victims and helping them overcome trauma. The internet was also crucial for advocacy and raising awareness, she said.

But the safety measures also meant more time at home, where children had increased access to the internet. “Children are becoming more vulnerable to sexual exploitation online, so all of us need to wake up to what is happening,” Poole said.

“Together we need to break the chain of the traffickers,” she added.

The work of the religious sisters also came at a high personal cost. Sister Alicia Vacas, the provincial superior of Comboni Sisters, spoke from Jerusalem on the trials she and her congregation suffered during the pandemic. 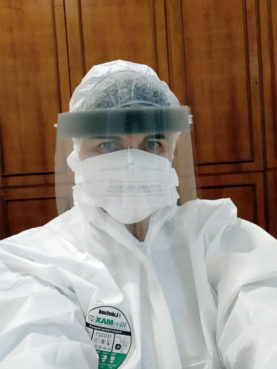 Sister Alicia Vacas dons personal protective equipment during the pandemic in Italy, March 20, 2020. Photo courtesy of the U.S. Embassy to the Holy See

Forty-five Comboni Sisters worldwide contracted the virus, including the mother superior, the administrator and nurses and even the staff, generating a sense of chaos, she said. Many of the older sisters died and the young ones, many of whom are nurses, couldn’t visit them for comfort.

At the height of the pandemic, Vacas lived in Bergamo, in northern Italy, which experienced some of the highest death and contagion rates in Italy. Ten members of her community died due to COVID-19, she said.

“It has been a very powerful and very intense experience living this coronavirus crisis and sharing the tragedy that many of our sisters are living right now,” Vacas said.

The Comboni Sisters are present in four continents and often work as nurses in hospitals, missions, refugee camps and other health facilities. Vacas said that in many hospitals in developing nations, sisters don’t have access to basic treatment and equipment to help patients contracting the virus.

“The situation is getting very worrying for some of the sisters,” she said, adding that one of the nuns in Chad was left as the only doctor in a hospital with more than 100 beds.

“When I look at my sisters, I don’t see superwomen. I see women of great faith, of great compassion, generosity and determination, but also very vulnerable women,” Vacas said. “Sometimes exhausted. Most of them left feeling powerless because they have burnout due to the brokenness of their people.”

“What I love most about them is they are resilient mothers,” she added. “They really believe that life is stronger than death.”

Speaking at the online symposium, the U.S. ambassador to the Holy See, Callista Gingrich, took a moment “to recognize and honor the tremendous sacrifices made by women religious during this pandemic.”

“Here in Italy, and around the world, many faithful sisters have made the ultimate sacrifice while caring for others,” she said.