(RNS) — “Here, people won’t die from COVID-19 but mostly from its consequences,” said Sister Marie Stella Kouak, a Catholic nun whose nonprofit in Togo, on Africa’s west coast, is on the front line against the pandemic and also facing unforeseen hardship.

“We just visited an AIDS patient,” she continued. “She was fine before and now she’s been staying in her room for two days; she’s agitated. These are the consequences of confinement measures that are decided without taking reality into account.”

That reality, the nun pointed out, is that other patients’ illnesses will worsen as the pandemic disrupts their access to care. “For us, it will be as if we would have to start again from scratch,” she said. Kouak is director of Vivre dans l’Espérance (Living in Hope), which she founded 21 years ago to help manage the fallout of the AIDS epidemic in the remote villages around Dapaong, in Togo’s northern corner, wedged between Burkina Faso and Ghana. In addition to employing 65 people, the organization runs two orphanages housing 150 children and youths whose parents died from AIDS. It also operates a community health center, a farm, a lodge, a sewing training center and a craft shop.

Born in Togo in 1967, Kouak attended nursing school in Belgium and returned in 1998 to work at a pediatric hospital in Dapaong run by her congregation, now known as the Sister Hospitallers of the Sacred Heart of Jesus. In 1999, she founded Living in Hope with a handful of volunteers, but her programs depend largely on Catholic Church nonprofits in France as well as individuals, most of them European, who sponsor the children living in Living in Hope’s orphanages.

Togo has suffered relatively few deaths so far from COVID-19, and the number of confirmed cases just broke 500 in June, but beginning April 2 the government instituted a lockdown of four major cities, restricting movement across the country and closing the borders. Earlier this month the government lifted the curfew in big cities and relaxed restrictions on movement between regions, but international borders remain closed, people are required to wear face masks and limits are in place on use of public transportation.

In addition, Islamist militant attacks on Westerners in Burkina Faso and neighboring Benin have already discouraged current and potential donors from Europe from visiting, cutting into her fundraising.

Kouak regularly communicates through social media and WhatsApp to give updates on the local situation and to keep in touch with her financial backers. When the lockdown was announced, she sent an emergency call to her network for donations to respond to the COVID-19 crisis. “The pandemic has increased our usual needs,” said Marcel Mendouna, Living in Hope’s vice president and administrator, by email recently. The restrictions on businesses have required Kouak and her colleagues to step up their visits to rural communities where they bring food kits and sanitary items such as soap and masks.

AIDS patients, many of whom fear contamination with the new virus, are afraid or are not allowed to come to Dapaong, and they need to have their antiretroviral drugs delivered to them. “Those who are sick don’t come to our health center anymore and resort to self-medication,” said Kouak.

“We have forecast a 55 million CFA francs (about $90,000) extra cost added to our 360 million CFA francs ($600,000) annual budget for 2020,” said Mendouna. The craft shop, the sewing workshop and the lodge, all of which generate revenue in normal times, have had to be shuttered.

Living in Hope’s latest projects, Kouak said, such as the construction of a maternity service at the health center or the opening of a primary school, might have to be put on hold.

And the strain may get worse. The local public health infrastructure is often underfunded in Togo and lacks the capacity to tackle the crisis, leaving faith-based organizations, Christian and Muslim, to play a key role in providing relief in the country’s least developed region.

Many in the region expect the economic toll of the pandemic will be high, and not only for the sick. Farmers, said Kouak, “can no longer move around and sell their crops. Hunger is increasing.” 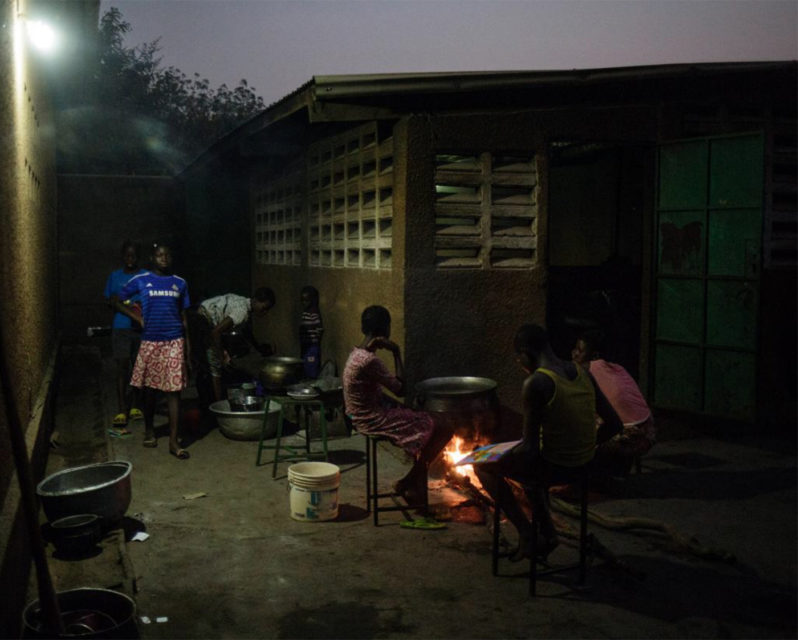 The World Bank is forecasting a sharp recession in sub-Saharan Africa, a first in 25 years, while the U.N.’s World Food Program warned of potential dramatic famines.

But the greatest impact will likely be on Kouak’s core population: The World Health Organization has estimated that COVID-19-related service disruptions could cause hundreds of thousands of extra deaths from HIV.

“The situation is getting more and more serious. We are losing revenues while poverty and vulnerability are increasing,” said Kouak, before reminding herself to remain optimistic. “After all,” she said, “the name of our association is Living in Hope. We believe with all our faith that the Lord will take care of the most fragile and that charity will persist to help the poor.”