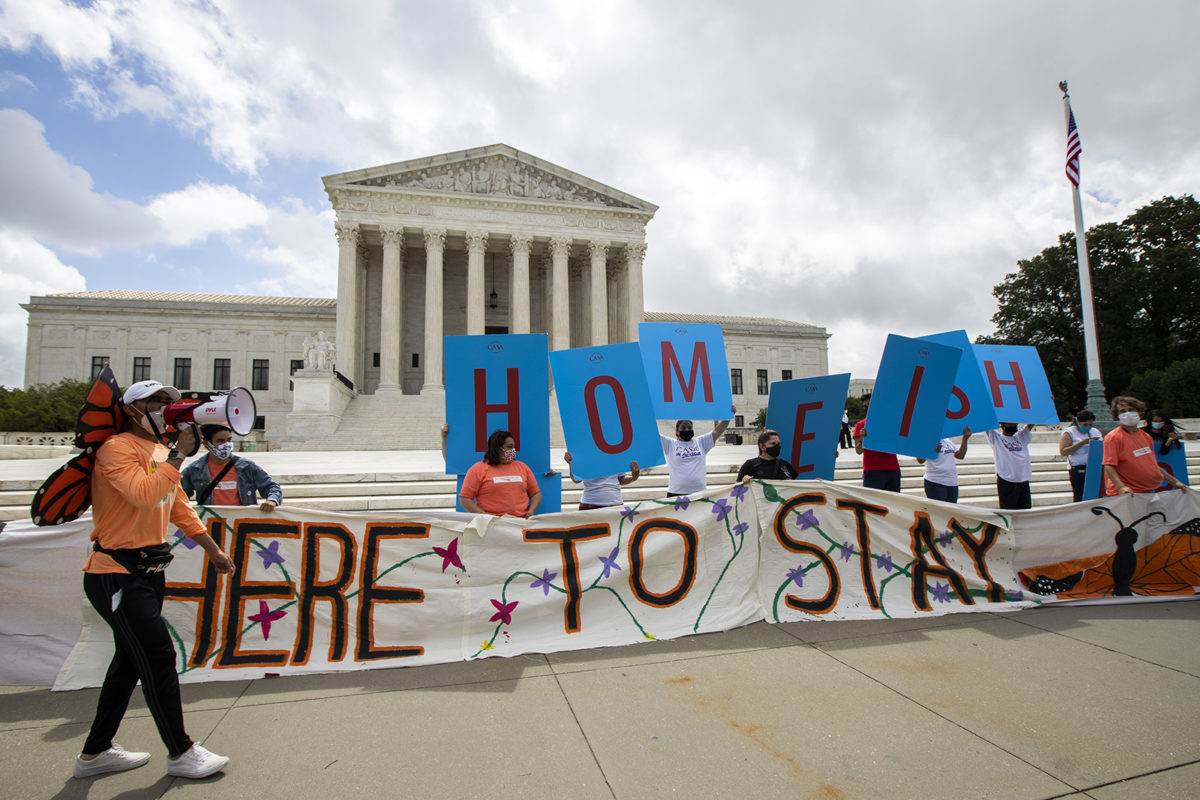 Deferred Action for Childhood Arrivals (DACA) recipient Roberto Martinez, left, celebrates with other DACA recipients in front of the Supreme Court on Thursday, June 18, 2020, in Washington. The Supreme Court on Thursday rejected President Donald Trump’s effort to end legal protections for 650,000 young immigrants, a surprising rebuke to the president in the midst of his reelection campaign. (AP Photo/Manuel Balce Ceneta)
June 26, 2020
Jim Wallis

(RNS) — Ivone Guillen, a former director of Sojourners' long-standing immigration campaign and a Deferred Action for Childhood Arrivals (DACA) recipient, calls last Thursday’s Supreme Court ruling that Trump could not end the program both a “miracle” and a reason to remain “realistic” moving forward. Here’s her statement:

The June 18 Supreme Court decision on DACA was the first time in many years where I’ve felt like my life and God-given dignity mattered to decision makers whose choices are often influenced by our polarized nation rather than the human lives their decisions deeply impact. The outcome was nothing short of a miracle and a sign that maybe justice was finally flowing like a river. While I took the time to celebrate the joyous day as it’s rare to receive good news on immigration at the national level, I have to remain realistic about the uncertain times we are living in. The decision is a temporary solution and it is part of a larger challenge we face as a country with a broken system that has no pragmatic or long-term solutions for the millions of undocumented immigrants still residing in the United States. We already know the work for justice has never been a sprint but rather a marathon that requires faith, endurance and collaboration. We must continue our work for our families, friends, and communities.

Ivone came to Sojourners in 2011 and served for several years. When we spoke after the decision, we recalled the time years ago when we entered the U.S. Capitol for a vigil and had to pass through the Capitol police at the door to get inside to peacefully protest.

For me, Jim, it was just another demonstration — the worst that could happen would be an unexpected arrest for civil disobedience and a possible fine. But for her, and all the other undocumented people entering, it was another moment of risk for detention and deportation. There was always a catching breath, hesitating at least for a moment, then making a choice. Risk is a factor of life all day every day for all those who are undocumented or who have loved ones who are.

All those doing this work, including here at Sojourners, have mostly known political and policy defeats. But we have worked to win churches and the country on immigration attitudes, including on Dreamers: 80 to 85% of Americans now oppose deportation for those in the DACA program. Last week’s decision gave all our former and current immigration staffers reason to celebrate, but also to discuss “what’s next?”

The fact that there are an estimated 13 million undocumented people in the United States today means most of us know someone who is at risk for detention and/or deportation because of the brokenness of the U.S. immigration system.

In 2017, President Trump fulfilled his campaign promise to end DACA, the program enacted by President Obama as an executive order in 2012 that protects from deportation young people who arrived in the country as children and know no other home. Trump's action immediately plunged about 700,000 people into legal jeopardy and prompted the court case to overturn his decision that went all the way to the Supreme Court.

For weeks, the 700,000 DACAmented people, those who love them, and those working for immigration justice in this country had been on high alert, dreading the Supreme Court’s DACA decision, given the court’s previous siding with the Trump administration on cases like the Muslim ban. Those who work on this issue every day had prepared statements for either outcome, but many of us were expecting a negative decision and were already planning next steps for that eventuality.

And so when the 5-4 decision came down, saying the Trump administration acted improperly in the way it ended DACA, the sense of unexpected relief and elation was hard to describe. The decision represents hope for 700,000 people, their families and friends. It opens doors to many who will now qualify for this program. Hope keeps communities going, and without hope communities die, and economies do, too.

It is moments like this that remind us that change is possible and motivate us to not settle for this partial fix. This was an energy-injecting decision that was needed amid a pandemic and the systematic racism inflection point that we are now experiencing.

DACA and immigration policy primarily are about lives. Immigration is about people with names and faces; that's where we must always start the conversation, where we must ground it, and where we must end it. We must never develop policy in a vacuum, only talking about abstract concepts rather than real people, their lives, their hopes and their dreams. One of the attorneys who defended this case in court, Luis Cortes-Romero, is a DACA recipient himself. His own future was at stake.

We mark this moment by honoring the history of the movement. This win was achieved through tireless efforts over decades.

The first Dream Act was introduced in 2001. For years, there has been organizing, "undocumented, unafraid" courageous presence, sit-ins and mobilization efforts by faith communities.

We remember one day, long ago, when a few of us faith leaders, together with young activists, marched around the Capitol before a vote, calling for the protection of Dreamers and their families. We lost. I recall tearful conversations afterward, but also the Dreamers’ commitment to persist in their moral call.

They have. In 2013, many of our faith communities, across theological and political boundaries, were instrumental in passing a bipartisan immigration reform bill out of the Senate that, while not perfect, would have brought needed solutions to many of the problems we still battle today. We remember back-to-back meetings with the Democratic and Republican committees working on the issue. The bill passed the Senate, and everyone agreed that it would have passed the House if ever allowed to come up for a vote.

And I, Jim, distinctly remember the Republican leadership of the House, including then-Reps. John Boehner (R-Ohio) and Paul Ryan (R-Wis.), look a few of us right in the eye and promise that they would bring the Senate bill or its equivalent up for a vote. They lied. They betrayed our faith communities. And immigration reform continues to be so painfully elusive.

Sojourners has been fighting for nearly 15 years to bring justice to the United States’ broken immigration system and protect all those who are vulnerable to the system’s capriciousness and cruelty. We have worked with partners to develop a strong network of supporters at the grassroots and the “grass-tops,” from denominational leaders and megachurch pastors to small-town local clergy, lay leaders and parishioners, all motivated by their faith to seek immigration justice.

Even as we allow ourselves to savor this victory and be lifted by the hope of this moment, we also need to prepare and strategize for what’s next, because the fight for immigration justice is far from over. The Supreme Court did not rule on the merits of whether Trump is allowed to end DACA — but rather on the way in which he attempted to do so. While he may not have time to try again before November’s election, it’s almost certain he can and will do so should he be reelected — there would be no restraints on how many people and families he would deport.

More broadly, we need a solution that protects all 13 million people who are undocumented, as well as legislation that protects asylum seekers and refugees. Ultimately, we need an immigration system that recognizes the historical presence of Indigenous people, that values the Earth and creation as entities to honor and not to possess/exploit, and that affords every community dignifying living conditions so that migration and permanency will increasingly be prompted by hope and not by unjust suffering. Jesus teaches that the way we treat immigrants and refugees is the way we treat him. This is a moment and a movement where we must choose to follow Jesus.

(Jim Wallis is president of Sojourners. His new book "Christ in Crisis: Why We Need to Reclaim Jesus" is available now. Follow Jim on Twitter @JimWallis. The views expressed in the commentary do not necessarily reflect those of Religion News Service.)