(RNS) — In late May, I received an invitation from two good friends asking me to do something I’d never done before — read and write a reflection from the Bible’s Book of Psalms. It would be my contribution to Psalm Season, an 18-week online exploration of the Bible’s book of prayer-poems, with readings, meditations and writing of the Psalms. It’s a project begun by two friends, Paul Raushenbush of the Interfaith Youth Core and Rabbi Or Rose of Hebrew College.

I had taught primary sacred texts in various classes of my own: an entire course on the Quran; readings from the Sikh Guru Granth Sahib; Hindu texts, including the epics, Vedas and Upanishads; and various selections from the Buddhist tradition.

But I have never taught the Bible. Moreover, in my classroom I have the luxury to treat the texts as an intellectual enterprise. My students and I explore diverse translations and interpretations of the same passages. I never have to make meaning for myself.

RELATED: How to pray, talk and act across faiths without betraying your own

I might have declined, but I had too much respect for those who invited me, and I trusted them. So I accepted, and waited for their note informing me of my assigned passage.

In June, I got an email that I had been assigned Psalm 133, one of the shortest at five verses or fewer, depending on the translation. My scholarly training nonetheless kicked in as I began reading and comparing the multiple translations they sent me. I then began reading about the history of the Book of Psalms, trying to collect all the context I could gather.

Pretty soon, I realized I was reading this passage of Scripture completely differently than I do my own. When I approach the writings from my own tradition, I try first to let them speak to me spiritually rather than to try to make sense of them rationally. The musical and poetic mode of Sikh Scripture helps with that, because music resounds within us before anything else.

This is not to say that understanding is not important. I appreciate the intellectual approach and practice it myself, and I encourage people to bring this to their own readings. But understanding the context and meter and literary genres of Scripture only gets us so far. Devotional compositions are not intended as logical expositions. They’re meant to bring devotion into our own hearts.

So instead of trying to contextualize it as a scholar and ascertain what the author might have intended, I decided to approach Psalm 133 as an ordinary reader and see how it might speak to me. The difference between these two approaches led to remarkably different readings.

Situating Psalm 133 in my own life — as a Sikh father in New York City, grappling with a global pandemic from COVID-19 and with the emergence of racial justice protests — gave me a new way of looking at this text.

“How good and pleasant it is when God’s people live together in unity!” the psalm begins.

The imagery of hair and facial hair and oil felt viscerally familiar to me as a Sikh man. That this was the first thing I noticed speaks to my own sense of identity: I see myself as a Sikh before anything else.

As I read the passage over and over, what stuck out was the theme of peace. At a time when so many of our minds are focused on finding goodness within our own lives, and at a time when so many of us are reflecting on what it would take to achieve collective harmony, I couldn’t help but feel the force behind the psalm saying that true, sustaining, meaningful peace comes through justice and equity. This, according to Psalm 133, is when life is at its sweetest.

“It is as if the dew of Hermon
were falling on Mount Zion.
For there the Lord bestows his blessing,
even life forevermore.”

So while the psalm doesn’t have the same meaning for me as a revelatory text, as it might for many Christians and Jews, my reading of the psalm showed that the Scripture of any faith, read as a source of wisdom, is like a prism: Seeing the same thing from a different perspective, we gain a different kind of illumination. We are all looking at sources of pain — individual and collective — seeking a way out. Opinion
Amy Coney Barrett and the American wars of religion 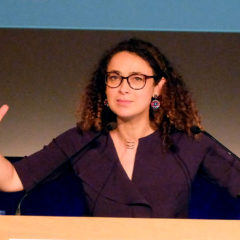 Opinion
In an era of disinformation we have to hold The Tennessean to a higher standard
Follow us on Facebook!
Submit your photos to RNS