(RNS) — The Hagia Sophia, built as a cathedral in the sixth century by the Byzantines before serving as a mosque for 500 years, has been a museum since the 1920s, when the founder of modern Turkey, Kemal Attaturk, converted it to secular use. For the past few months, Turkey’s current president, Recep Tayyip Erdogan, has been making signs that he wants to turn the majestic building on the Bosporus back into a mosque.

I speak for many Muslims in appealing to Erdogan to let it remain a museum.

Changing the status of Hagia Sophia, “one of the most contested buildings” in the world, according to a recent report in Al-Jazeera, would create needless animosity between Islam and Christianity, while offering only a short-term political gain for Erdogan’s pro-Islamic Justice and Development Party.

Muslims are charged by the Prophet Muhammad to mitigate conflicts and nurture goodwill. The word “Islam” is rooted in “salaam,” or peace, and it behooves us to seek peace and harmony in our actions and words.

The Greek Orthodox Church, which still mourns the loss of its highest-profile church to Mehmed II, the Ottoman conqueror, has nonetheless accepted it. The local Greek Christian and Muslim societies are moving toward respecting the “otherness” of the others. Converting the Hagia Sophia to a mosque would rekindle hostilities that none of us want.

The Quran says that God’s name is extolled abundantly in churches, synagogues and mosques, which is reason enough to protect all such places of worship. But respect for others’ holy places extends deep into Muslim history. 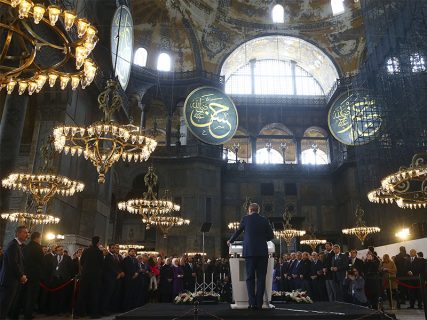 Turkey’s President Recep Tayyip Erdogan delivers a speech during an arts biennial opening inside the Byzantine-era Hagia Sophia, a UNESCO World Heritage Site and one of Istanbul’s main tourist attractions, in the historic Sultanahmet district of the city, on March 31, 2018. (Kayhan Ozer/Pool Photo via AP)

After his army conquered Jerusalem about 638, Umar, one of the prophet’s early successors, was offered the opportunity to pray in the Church of the Holy Sepulchre, where, tradition has it, Jesus’ body once lay. Umar set an example by choosing not to, out of concern that Christians would no longer be able to use it as a church or that a future generation would convert it to a mosque.

As Sayyid M. Syeed, president of the Islamic Society of North America, the largest Muslim civic body in America, has pointed out, “The conversion of the Hagia Sophia was against the historical examples set by the righteous caliphs,” beginning with seventh-century caliph Abu Bakr, when he advised his general heading to conquer foreign lands to spare houses of worship they encountered.

Syeed added that Indian Muslims objected fiercely when the historic Babri Mosque in India was torn down by a Hindu mob in 1992. “We cannot do the same thing to Hagia Sophia,” he said.

As American Muslims, we celebrate the constitutional freedoms that have enabled us to build 3,000 mosques in the United States in the last half-century. We should extend the same respect we hope for to all faiths and houses of worship around the world, and be consistent in our policies. We have to set an excellent example for the world.

Erdogan needs to consider the sunnah, or traditions, of Muhammad, who was and is a mercy to mankind. The majority of Muslims will applaud the Turkish leader for walking on the right path. May God bless him.

(Mike Ghouse, a speaker and author, is the founder and president of the Center for Pluralism. The views expressed in this commentary do not necessarily reflect those of Religion News Service.)