(RNS) — In two closely watched decisions that came as a surprise to no one, the Supreme Court Tuesday gave aid and comfort to those who seek exceptions to government regulations on religious grounds. Both decisions were by identical 7-2 votes, and neither answered the critical underlying questions.

The first case, Our Lady of Guadalupe School v. Morrissey-Berru, modestly expanded the reach of the “ministerial exception” recognized by the court in its Hosanna-Tabor decision eight years ago. Then, a unanimous court decided that a Lutheran-Missouri Synod school in Michigan that trained and treated its teachers as ministers was within its religious rights to fire a teacher regardless of government fair employment rules.

In Our Lady of Guadalupe, which involved teachers at two Catholic schools in Los Angeles, the Court determined that religious institutions do not have to formally identify teachers as ministers in order to have the latitude to fire them. As Justice Samuel Alito, writing for the court, put it, “What matters, at bottom, is what an employee does.”

What the Catholic school teachers did was provide students with some catechetical instruction, pray with them and take them to Mass. Under the schools’ hiring rules, however, teachers were not actually required to be Catholic themselves — a fact noted with some acerbity by dissenting Justice Sonia Sotomayor:

Pause, for a moment, on the Court’s conclusion: Even if the teachers were not Catholic, and even if they were forbidden to participate in the church’s sacramental worship, they would nonetheless be “ministers” of the Catholic faith simply because of their supervisory role over students in a religious school.

Pointing out that the decision “appears to allow that employer to make employment decisions because of a person’s skin color, age, disability, sex, or any other protected trait for reasons having nothing to do with religion,” Sotomayor (along with Justice Ruth Bader Ginsburg, who joined her dissent) may be regretting that she signed on to Hosanna-Tabor, which says straight out that the “purpose of the exception is not to safeguard a church’s decision to fire a minister only when it is made for a religious reason.”

Be that as it may, the unresolved question before the court this term was how far the ministerial exception extends into the ranks of a religious organization’s employees.

The maximalist position was taken by Justice Clarence Thomas (joined by Justice Neil Gorsuch), who wrote in a concurrence that the courts must “defer to religious organizations’ good-faith claims that a certain employee’s position is ‘ministerial.'” In other words, should a church school believe that all employees — including secretaries, lunchroom attendants and janitors — are ministers, then that is their legal status. 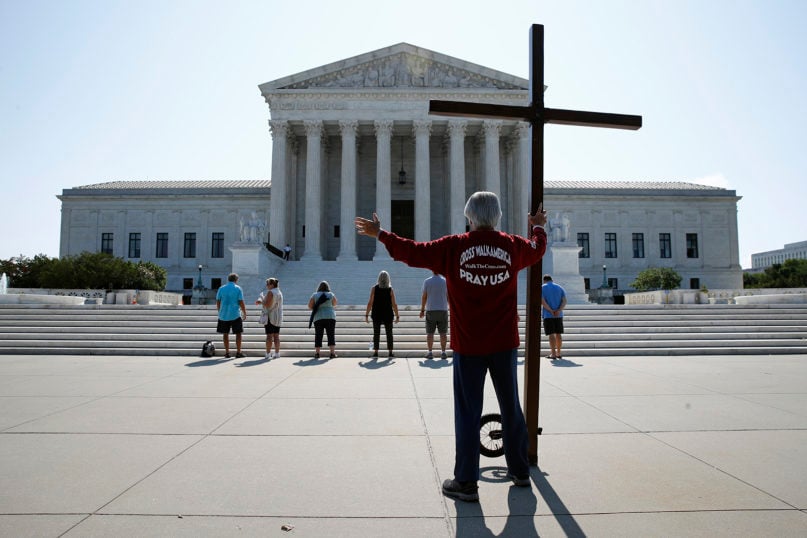 Tom Alexander holds a cross as he prays prior to rulings outside the Supreme Court on Capitol Hill in Washington on July 8, 2020. The Supreme Court is siding with two Catholic schools in a ruling that underscores that certain employees of religious schools, hospitals and social service centers can’t sue for employment discrimination. (AP Photo/Patrick Semansky)

If the court as a whole wasn’t prepared to go that far, where and how will it draw the line?

In the second case, Little Sisters of the Poor v. Pennsylvania, the court once again addressed the issue of religious exceptions to the provision of the Affordable Care Act (ACA) that requires insurance plans to include free contraceptive care for women.

The earlier cases sought to require the Obama administration to grant more exceptions — notably succeeding with Hobby Lobby in 2014 in extending them to closely held for-profit companies. After the Trump administration reversed federal policy to permit exceptions on religious or moral grounds for even publicly traded corporations, Pennsylvania (and New Jersey) sued to prevent that from happening.

The decision in Little Sisters did not turn, however, on religious rights but on how much latitude federal departments have under the ACA to establish standards of care. “The only question we face today is what the plain language of the statute authorizes,” wrote Thomas for the court. “And the plain language of the statute clearly allows the Departments to create the preventive care standards as well as the religious and moral exemptions.”

But although seven justices agreed with that proposition, it does not end the case. In deciding that the Trump administration had violated the ACA when it promulgated its exceptions, the appeals court never reached the plaintiffs’ claim that the administration had failed to follow the rule-making procedures required by the Administrative Practices Act. And while Thomas is at some pains to show that the procedures were followed, Justice Elena Kagan (in a concurrence joined by Justice Stephen Breyer) makes clear that, as has happened with regularity in this administration, they were not.

Alito more or less concedes Kagan’s point in a maximalist concurrence of his own (joined, again, by Gorsuch) that seeks to avoid further appellate review by claiming that the Trump exceptions are actually required by the federal Religious Freedom Restoration Act (RFRA).

If RFRA requires this exemption, the Departments did not act in an arbitrary and capricious manner in granting it. And in my judgment, RFRA compels an exemption for the Little Sisters and any other employer with a similar objection to what has been called the accommodation to the contraceptive mandate.

For religious jurisprudence nerds, this raises the question of why Thomas, who is hardly shy about adopting strong religious liberty positions, himself didn’t invoke RFRA to end the case in this way. Most likely, either Justice John Roberts or Brett Kavanaugh or both are not prepared to go there, or at least not yet.

As in Our Lady of Guadalupe, the dissenters in Little Sisters were Sotomayor and Ginsburg. “Today, for the first time,” wrote Ginsburg, “the Court casts totally aside countervailing rights and interests in its zeal to secure religious rights to the nth degree.”

So what does the future hold?

If President Trump is reelected, either the procedures will be determined to have been valid or, as it has done before, his administration will redo the process the right way and the blanket exceptions will become the rule.

If Joe Biden is elected, on the other hand, then the Obama administration’s rules will remain in place, be challenged again, and the court will be faced with having to decide what RFRA does and does not require.