(RNS) — Three evangelical churches in California have sued Gov. Gavin Newsom for banning singing and chanting in places of worship but permitting such activities elsewhere.

The state’s July 13 order about COVID-19 permits worship services as well as fitness centers, hotels, shopping malls and protests to remain open or active in Mendocino and Butte counties, where the suing churches are located.

“Singing and chanting, however, is only banned in places of worship,” says the 20-page complaint filed Wednesday (July 15) in a federal district court by the American Center for Law and Justice and two other legal groups.

Calvary Chapel Ukiah, Calvary Chapel Fort Bragg and River of Life Church in Oroville asked the court to halt officials in the state and their counties from enforcing the orders that call for no singing in houses of worship.

“Banning singing in California churches is an unconstitutional abuse of power,” said Jordan Sekulow, executive director of the ACLJ, in an announcement about the suit. “And to do it in the name of a pandemic is despicable.”

The state’s early July guidance for houses of worship notes a higher risk of transmitting COVID-19 in a congregational setting of multiple households.

“In particular, activities such as singing and chanting negate the risk-reduction achieved through six feet of physical distancing,” the 14-page document says. “Places of worship must therefore discontinue indoor singing and chanting activities and limit indoor attendance to 25% of building capacity or a maximum of 100 attendees, whichever is lower.”

A spokeswoman for the Office of Emergency Services said the guidance by the California Department of Public Health is a requirement, The Associated Press reported.

It “has the same authority as all of CDPH’s other guidance, directives, and orders, which the governor has ordered residents to heed,” said Ali Bay. 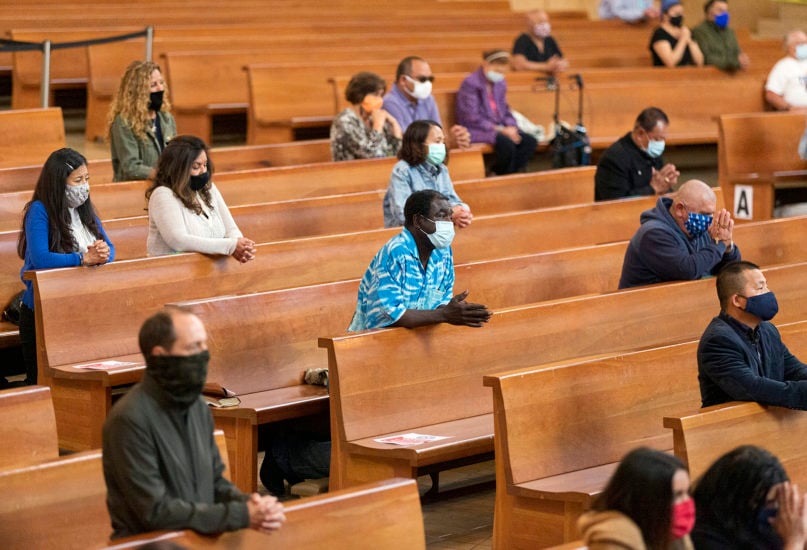 The plaintiffs argue the guidance “specifically and discriminatorily targets places of worship.”

They say it violates their free exercise of religion that is guaranteed under the First Amendment and forces them into an “irresolvable conflict” of having to choose between following their “sincerely held religious beliefs” or the state mandates.

Their suit, which also calls the state action a violation of free speech rights, noted what they consider an inconsistency in comparison to Newsom’s support of protests against police brutality.

“On or about July 2, 2020, following implementation of the Worship Ban, when asked to explain whether people should heed Newsom’s mandate and avoid large crowds and gatherings, Newsom refused to place the same restrictions on protestors and explained ‘we have a Constitution, we have a right to free speech,’” the complaint states, quoting a recent radio interview.

Citing verses from the Book of Psalms and the New Testament Book of Ephesians, which speaks of “psalms, hymns and spiritual songs,” the churches say in the suit that congregational singing is a key aspect of their worship.

“Singing and praying aloud as a body of Christ is an integral part of worship for believers,” they say. “To prohibit group singing and chanting is to effectively prohibit corporate Christian worship.”

Other California pastors have criticized the new guidance related to congregational singing.

The Rev. Samuel Rodriguez said members of his evangelical megachurch in Sacramento sang hymns on July 5 as many congregants followed physical-distancing recommendations and wore face masks, the AP reported.

“To forbid singing in a church is morally reprehensible,” Rodriguez said. “That is how we petition heaven.”

Dr. Howard Leibrand, a public health officer in Skagit County, Washington, told Religion News Service in May that he did not recommend congregational singing “until we get a vaccine.”

He was one of the investigators of a coronavirus outbreak that spread through a local chorale meeting in a Presbyterian church. A report published by the Centers for Disease Control and Prevention that tracked 61 people at a March rehearsal found that 87% contracted COVID-19 and two of three hospitalized members died.