(RNS) — When he found the joke, Ramy Youssef had been searching for it for four months. It was the summer of 2015. He was back east visiting his parents in his native New Jersey and had driven his mom’s car out to Brooklyn to perform a quick stand-up set.

“I just started talking about what I was doing. I was like, ‘I’m fasting Ramadan.’” There were about 10 people in the crowd. “Oh your parents make you do that?” a guy shouted out. “I was like, no, this isn’t about anyone making me do this. It’s what I want to do.” Then the comic blurts out, “I believe in God. Like, God, God. Not yoga.”

On the drive back to New Jersey, he said, he listened back to his set on his iPhone and then shot off a text to fellow comedian Jerrod Carmichael. “Dude, I think I found a joke.”

The first thing people tend to notice about “Ramy,” the A24/Hulu series written, directed and produced by Youssef, is that it’s the first American television show about a Muslim family. The show lives and breathes in the specificity of a millennial male raised in an immigrant Arab community in New Jersey, but what the show tries to reveal is something not spoken of much in public, and certainly not in Hollywood: people’s actual relationship to faith and to the greater questions of purpose and meaning.

The show is the product of the auteur-vision of 29-year-old Youssef, who has spent the last decade working as a comic and actor in Hollywood. It’s a culmination of what grew out of that first joke, and in two seasons has a firm grasp on a new comedic language for which to approach and to talk about spiritual matters in the generally secular, irreligious landscape of comedy and television. It’s only able to do this because it’s written from a deeply autobiographical place of ruthless self-interrogation, which allows the character’s questions to come through the screen with an authenticity that’s hard to ignore.

The character Ramy Hassan began as a fictionalization of Youssef’s own spiritual and emotional experiences more so than anything else. Oddly enough, Youssef didn’t build Ramy to be liked. He had an idea that Ramy would act as a representation of our lower selves, those purely egoistic unthinking qualities of our beings that irrationally oppose and battle our higher aspirations. 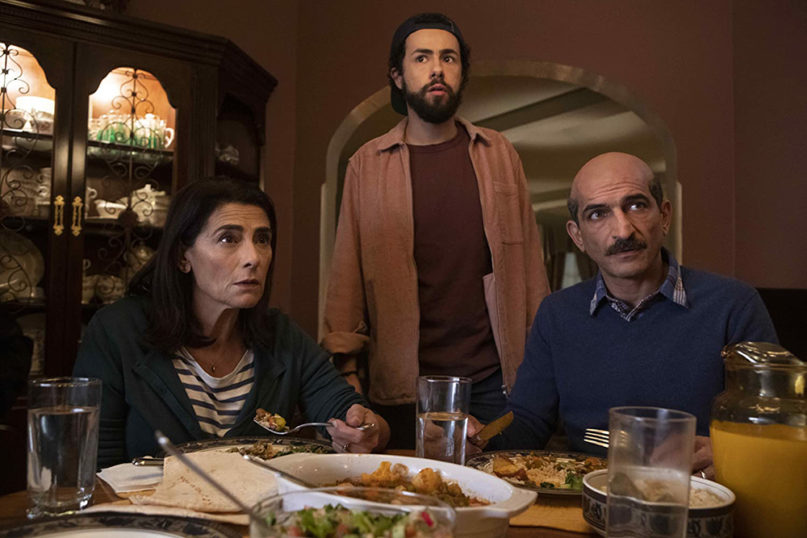 But he’s not one-dimensional either.

Ramy is a well-meaning, earnest but immature seeker, and if he possesses any heroic quality, it’s his refusal to give up on his soul, despite his own seemingly constant moral failures. No matter how far he falls, he never loses the aspiration to be good, even when surrounded on all sides by forces that we recognize might stamp out that light of ambition if it were us in his shoes.

We see his world established in the pilot episode: On the one hand, he is a conflicted participant of a hedonistic culture of partying and sex, but on the other, he feels a spiritual strength and connection to his faith, despite elements of a closed-off, illogical conservatism. This all makes Ramy Hassan a most unusual protagonist, a character whose motivation is seeking a genuine connection to God.

“I’ve always felt like a very honest seeker, and I wanted to make work that felt like that. (Work) that felt self-examining,” Youssef explained. He came out to Hollywood at 19 years old, and in the first six or seven years appeared on a few TV shows and was doing regular stand-up, but he felt a yearning for his work to be representative of what was going on inside of him in a spiritual sense. 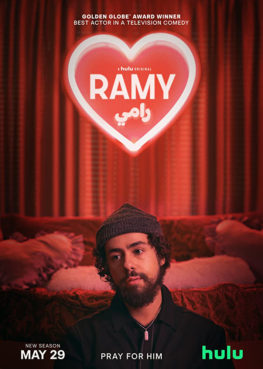 A poster for the Hulu series “Ramy.” Image courtesy of Hulu

He began by talking about his guilt on stage, mostly around premarital sex. Growing up and into adulthood, Youssef never questioned his faith, but he did start to doubt himself in it when he began to slip up.

“So much of my life I was saying, I want to do this the right way. I’m not going to have sex until I get married,” he said. “Somewhere along the way I broke those rules and then started to feel like the way the setup was around me that I should leave (the religion). And that made me really sad because I didn’t want to let go.”

The more a question scared Youssef, the more valuable it became for him to include it in his stand-up. If he got up on stage and didn’t feel vulnerable, or the most scared he’d ever felt to say something, it ceased to feel like the work he was supposed to be doing.

Taking a difficult feeling and then extrapolating the jokes and stories from it became Youssef’s art. “I’m putting myself under the microscope. And then, and then I started to think, oh, this will be really cool because I want these conversations to come up. I want this kind of self-examination to happen in our communities,” he explained.

Once he realized he could be a force to instigate real conversation and examination, Youssef brought together a team to build a show around this idea. “I actually have this vehicle where I can create this character for everyone to examine. You know, this character is not built to be liked.”

The show depicts a religious environment where every character except for Ramy seems content with the various mismatches between their beliefs and their practice of their faith. These are treated as humorous idiosyncrasies rather than as tragic character flaws — which allows them to serve as metaphors for the audience to pick up on unexamined faults and difficult questions we otherwise might be too ashamed to see and too afraid to ask.

In the first season, Ramy Hassan meets an earnest but simple white convert in the mosque who points to the moral lesson that undergirds the entire season: “You’re all like, I do these things and I don’t do things, so I’m this kind of person, right? It’s a trick of the devil, bro.” With this line and its characteristic non-chalance of Youssef’s writing, the minor character delivers a deep spiritual lesson gleaned from the inner tradition of Islam: that to identify oneself with one’s actions is poison to the spiritual path. One will either despair because they see themselves as a sinner, or will be self-satisfied because of their pious works. The Sufis say a sign that a good action was not accepted by God is that one remembers he or she did it.

Season 2 proves Youssef’s vision for art can translate into stories outside of his own personal narrative. We are introduced to Shaykh Ali Malik, played by Mahershala Ali, the first person on the show who practices faith in a way that appears strong yet still relatable. He is a religious character who feels human, without being hypocritical. Ali plays a Sufi teacher whom Ramy latches onto in the beginning of the season, and he shows what a balanced approach to religion might look like. 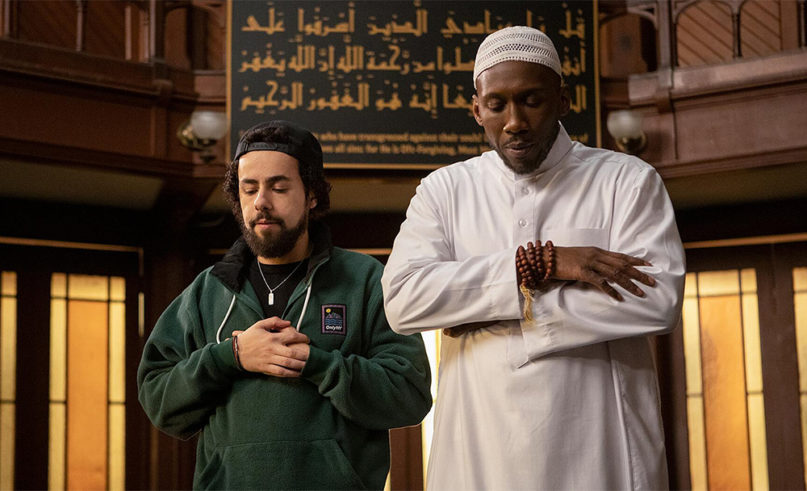 “Islam is like an orange,” Shaykh Ali explains to Ramy early in the season. “There’s an outer part and an inner part. If someone only got the rules and rituals, they might think Islam was tough and bitter … the rind without the flesh is bitter and useless. The flesh without the rind would quickly rot. The outer Shariah (religious law) protects the inner spirituality, and the inner spirituality gives the outer Shariah its purpose and meaning.”

Whereas the first season felt like an encouragement to the would-be religious, Season 2 seems like a parable for the religious: You might think you’re better because you’ve changed your circumstances, but without the self-examination and rigor Shaykh Ali represents, when tested, you will fall.

All comedy relies on tension; there has to be an inhale and an exhale. What Youssef has discovered is that the inhale can be used to take deep dives into the soul to bring out what was already there.

“It’s not about giving answers. I’m not in a position to do that. I would be idiotic if I tried to do that through any of the forms I create, but can I bring people closer to their questions? That seems to me to be my audience — people who need that, who want that, who are excited by that. Anyone who feels like they solidly have the answer probably hates my work.”

The first two seasons of “Ramy” are just the first few chapters for what might become a modern-day epic, an illogical and soulful morality tale for people who have questions they’ve been too afraid to ask or who are still interested in the future and health of religion in America. It’s a bizarre hagiography of a ridiculous man. Were Ramy Hassan a literary character, he’d be the Don Quixote of the spiritual path, marching forth in his mission with unending enthusiasm, undeterred by his own repeated failures.

News
Pakistan attempts to prosecute Ahmadi US citizens for digital blasphemy
Islam Beyond Phobia
Moving past inshallah: What Muslims want to see in a Biden presidency
News
Across America, Muslims are becoming a fixture on the disaster relief landscape
Opinion
Rihanna’s hadith fashion show moment has some asking: Is Islam too sacred for art?
Opinion
Why all Americans need Muslim Americans to vote