(The Conversation) — Since its origins in the sixth century A.D, the Hagia Sophia has served as a church, a mosque, and, since 1934, a museum. But on July 10, the Turkish government declared that from now on it would serve as a mosque and be open for all visitors when not in use for the five daily prayers.

The first “namaz,” or the Muslim prayer, to take place under the building’s soaring dome in 86 years was set for July 24.

The move to change the status of one of Istanbul’s most recognizable landmarks has drawn strong reactions.

It is worth considering why so many have, for so long, cared so much about the fate of the Hagia Sophia as responses praising and condemning the decision have come in from around the world.

As a scholar specializing in Islam, I have studied the power of sacred spaces, including the Hagia Sophia, to unify and divide communities.

For almost a millennium and a half Hagia Sophia has embodied both possibilities.

Built in the sixth century by the Byzantine Emperor Justinian, this marvel of architecture and aesthetics was never just a religious enterprise.

The emperor needed a spectacular means of establishing his authority and quelling internal rebellions that threatened his rule. 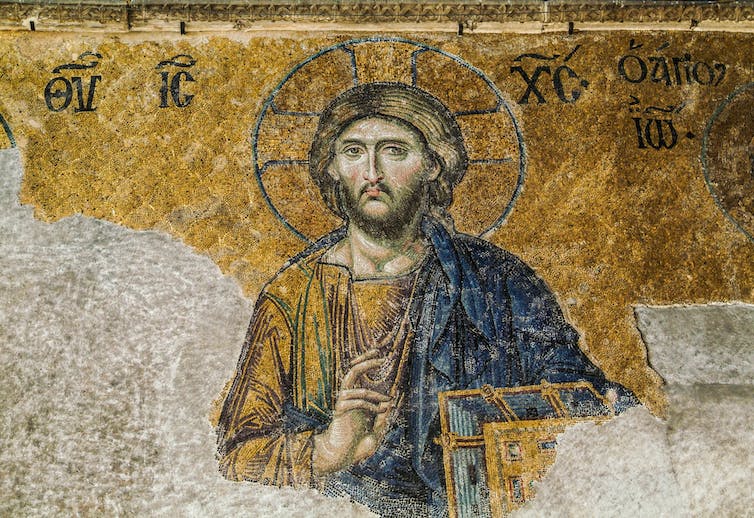 Justinian, called “the builder of the world” by his chronicler Procopius, hoped the monument – a cathedral – would help establish his political domain and unify a fractious Christian church divided by theology and competing regional power bases.

Only a great ruler could build such an edifice, and only a great empire could sustain it.

The first shift in the building’s identity occurred during the Fourth Crusade. Frankish holy warriors occupied Constantinople from 1204 to 1261, looting the Hagia Sophia of its many treasures.

By that time the Eastern Orthodox church based in Constantinople and the Western Catholic church based in Rome had broken apart in the great schism of 1054 A.D. After the Byzantine reconquest of Constantinople, it took some convincing for the population to return to the cathedral that had been despoiled by the crusaders.

The next major shift occurred almost 200 years later with the Ottoman conquest in 1453 A.D. that saw Constantinople renamed as Istanbul and Hagia Sofia converted into a mosque. Sultan Mehmed II, who lived from 1432 to 1481 A.D., established an endowment in perpetuity providing the Hagia Sophia mosque with the necessary support and staff. At the same time, he encouraged his Muslim subjects to pray there.

After the conversion, an alcove facing Mecca, known as the “mihrab” was added, making it possible for Muslims to know the proper orientation for the five time daily prayers.

A pulpit or “minbar” for giving the Friday sermon was also installed. Eventually calligraphic medallions of the names of God, Muhammad, and the first four caliphs of Islam, were added to this monument.

The many mosaics of Christian figures such as Jesus, Mary, the apostles and saints, as well as various Byzantine rulers were mostly left intact and not completely plastered over until the 1840s when Sultan Abdülmecid II hired the Italian Fossati Brothers to renovate and restore the building.

At that time, many cracks were repaired in the dome, a new platform for the sultan’s prayer space was built, and the mosaics were cleaned. Though initially the sultan preferred to have them on display, religious sensibilities that objected to praying in the direction of human images meant that the mosaics with such depictions were plastered over, even as they were preserved.

After the demise of the Ottomans in the early 20th century, the new Republic of Turkey, founded on secular principles and seeking legitimacy in international institutions, renovated the Hagia Sophia as a museum.

The founder and leader of the new Turkish Republic, Mustafa Kemal Atatürk promoted numerous projects to minimize the public role of religion in society, from changing the script of the language from Arabic to Roman to outlawing public displays of religiously marked clothing. He also banned the popular and powerful Sufi mystical orders such as the Mevlevis and Bektashis.

Turning the Hagia Sophia into a museum demonstrated that the building’s composite history could exemplify the power of secular modernity. This involved restoration of the structure, removal of the plasters over the mosaics, and, eventually, adding a gift shop and ticket booth.

At its peak, 3 million people a year passed through the complex with foreign visitors paying the equivalent of US$10 to enter; Turkish nationals could visit at reduced rates.

The Turkish government has said it will make few changes to the building after its conversion into a mosque, though curtains will cover the mosaics depicting Christian divine and saintly figures that are visible to those offering the Muslim prayers. After the prayers are completed, the curtains can be removed so visitors can see them.

There will no longer be a fee for anyone to enter the Hagia Sophia.

Every time the Hagia Sophia has transformed over the last 1,500 years, the change has been incomplete and contested in some way.

Even before these developments, proponents of the church set up websites with images of the minarets erased and a cross reinstalled on the crest of the dome. These advocates hoped to restore the lost Byzantine Empire.

There are also those who desire to bring back a new Ottoman Empire. Advocates for the mosque argue that the conversion to a museum was illegitimate as the change was never published in Turkey’s Official Gazette – a requirement to register any official act.

For some Muslims, the Hagia Sophia was always linked to Islam. Legend has it that when the dome collapsed in the late sixth century it coincided with the birth of Islam’s prophet, Muhammad, and was only reparable with the addition of his saliva to the cement.

Changes over the years

The desire of some Turkish Muslims to pray in the Hagia Sophia was partially realized in the early 1990s when a prayer space was opened in a passageway through a minaret. 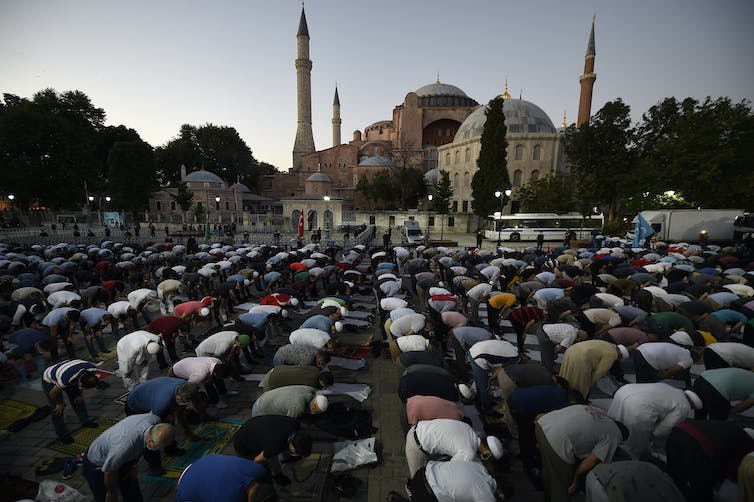 Over the years considerable resources were invested in improving and decorating this space, which also housed the office of the Hagia Sophia’s prayer leader, or an Imam, a position supported by Sultan Mehmet’s original endowment.

Enormous crowds have gathered annually on May 31, the anniversary of the Ottoman conquest, to pray in the streets and plazas outside the Hagia Sophia. Quran recitations and calligraphy exhibitions have been held in the building as well.

As recently as March 2019, President Recep Tayyip Erdoğan had expressed opposition to the change, but the groundswell that came to fruition in 2020 has been long underway.

There are many Turkish citizens, both non-Muslim and Muslim, who are opposed to these developments. These include Turkey’s Christians who form 0.5% of the population. However, they have little recourse.

Following the decision to reconvert the monument to a mosque, the UN’s cultural heritage organization UNESCO said in a statement that it “deeply regrets” the move. Christian leaders too have stated that they are “are very saddened” by the “regrettable and lamentable” change.

Governments including Greece and the United States have lodged their objections.

This disquiet over the change in its status is a reminder that as a potent symbol of authority, the Hagia Sophia has shifted identity with every change in power and will likely continue to do so.

(Anna Bigelow is an associate professor of religious studies at Stanford University. This article is republished from The Conversation under a Creative Commons license. Views expressed in this commentary do not necessary reflect those of Religion News Service.)

News
Normally a refuge on campus, college Muslim groups fight students’ isolation in a pandemic
News
Activists to hold protest rally after reports of ICE officials forcing Muslim detainees to eat pork
News
600 faith leaders sign letter urging California governor to stop transfer of incarcerated people to ICE
Islam Beyond Phobia
On Ashura, Muslims recall how faith in God overcomes tyrants
Opinion
To beat Trump, the ‘good Muslim, bad Muslim’ messaging has to end
© Copyright 2020, Religion News Service. All rights reserved. Use of and/or registration on any portion of this site constitutes acceptance of our User Agreement and Privacy Policy, Privacy Statement and Cookie Notice. The material on this site may not be reproduced, distributed, transmitted, cached or otherwise used, except with the prior written permission of Religion News Service.