(RNS) — John Lewis was a friend and mentor.

As I, Jim, said when he died last Friday, John Lewis showed us the way again and again; his truth will keep marching on. I was moved to share a tweet from my son Luke, which said, “I’m honored to have ever been in the room with this man. Let’s fill these empty statue pedestals with patriots like #repjohnlewis.” Under his tweet was a picture of John Lewis holding Luke as a baby — he’s the only politician I ever let hold my child.

John Lewis was a longtime supporter and friend of Sojourners, speaking at our conferences, joining gatherings of advocates on the Hill, and meeting us for conversations about faith and politics. His faith infused his whole life — as an activist in the streets and as a congressman for 17 terms. He always fought for justice because of his faith.

Perhaps the most impactful memory I have of John Lewis comes from being with him on the infamous Edmund Pettus Bridge in Selma, Alabama, on the 50th anniversary of “Bloody Sunday” with other now-iconic civil rights activists like the Rev. C.T. Vivian — who died on the same day as Lewis, his dear friend.

On March 7, 1965, John Lewis was almost beaten to death on that bridge — but the blood shed on that day led to the historic march from Selma to Montgomery and, ultimately, to the Voting Rights Act five months later. Bloody Sunday is one of our country’s most striking examples of how risk and self-sacrifice can lead to dramatic social change.

“On that day, 600 people marched into history … We were beaten, tear gassed, some of us (were) left bloody right here on this bridge,” Lewis said in 2015 as he opened the 50th anniversary event before introducing President Barack Obama. “… But we never became bitter or hostile. We kept believing that the truth we stood for would have the final say.” 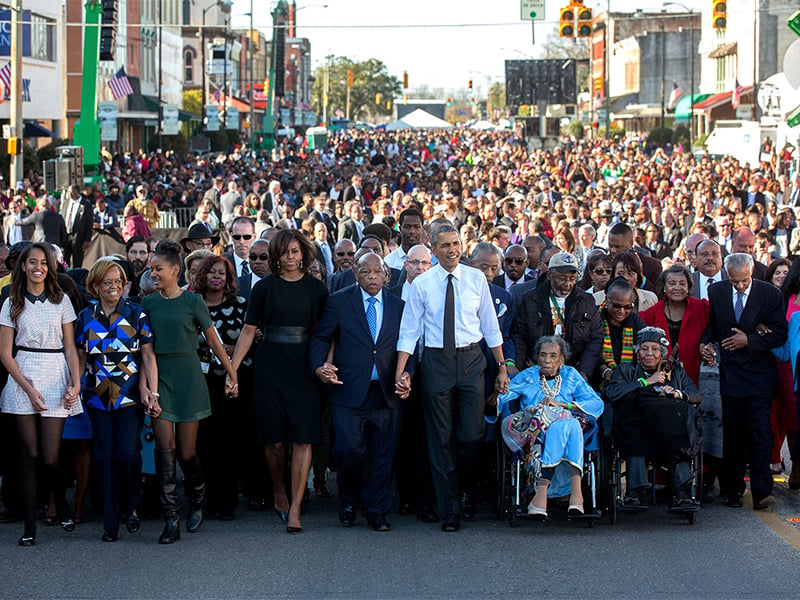 President Barack Obama and First Lady Michelle Obama join hands with Rep. John Lewis, D-Ga. as they lead the walk across the Edmund Pettus Bridge to commemorate the 50th Anniversary of Bloody Sunday and the Selma to Montgomery civil rights marches, in Selma, Ala., on March 7, 2015. Photo courtesy of The White House/Lawrence Jackson

Obama then turned from the past to the future:

What greater expression of faith in the American experiment than this; what greater form of patriotism is there; than the belief that America is not yet finished, that we are strong enough to be self-critical, that each successive generation can look upon our imperfections and decide that it is in our power to remake this nation to more closely align with our highest ideals? … It requires the occasional disruption, the willingness to speak out for what is right, to shake up the status quo. That’s America.

Some of us were then invited to walk across that bridge with the “foot soldiers” — those who marched on the bridge that day 50 years ago. I was overwhelmed as I marched behind those humble and courageous heroes — all elderly now, but still marching. I walked next to C.T. Vivian, who still stood up so straight and tall; and when I hugged my friend John Lewis atop the bridge, I was literally in tears. I couldn’t help looking at the world from the top of that bridge, feeling in the middle of history. I felt so deeply blessed to just be in the presence of people who changed the world.

There, I spent many hours just looking at that bridge. The words that kept coming to me were “courage” and “gratitude,” and the question that surfaced was: What bridge will we now have to cross?

Both of my young boys marched with me and their mom at Black Lives Matter Plaza in Washington, D.C. — the last public place John Lewis stood, just days before he died. As the president said on that day in 2015, “… it is you, the young and fearless at heart, the most diverse and educated generation in our history, who the nation is waiting to follow.”

So how do we honor John Lewis and C. T. Vivian in the midst of our history — right now? 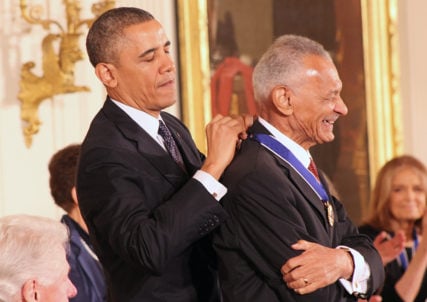 President Barack Obama places the Presidential Medal of Freedom on the Rev. C.T. Vivian in the East Room of the White House on Nov. 20, 2013. RNS photo by Adelle M. Banks

I, Adam, grew up believing that my generation inherited the unfinished business of the civil rights movement. I was deeply humbled when Congressman Lewis agreed to write an afterword for my first book “Mobilizing Hope: Faith-Inspired Activism for a Post Civil Rights Generation,” as I couldn’t think of someone who better personified a life of mobilizing hope. And while I only had the honor of meeting C.T. Vivian once, the precious moments that I spent with him at the 2015 Sojourners Summit left me deeply moved by his wisdom and resilient hope.

The call to carry on the work of the civil rights movement feels more urgent now that the baton has been passed on from these two remarkable giants of the ongoing struggle to subsequent generations. But that baton feels much heavier than I believe both of them had hoped, weighed down by the insidious persistence of racial inequality and the pervasiveness of police violence and systemic racism in our nation. Studying the lives and activism of both Congressman Lewis and Rev. Vivian at an early age, I felt vocationally called to find ways to recreate a Student Nonviolent Coordinating Committee commitment to justice activism as a core requirement of discipleship.

While stumbling at times, I’ve tried to follow in the footsteps of these and so many other civil rights leaders, including by trying to advance economic justice as the next frontier of the unfinished business of the movement and by addressing the mass incarceration and continued police violence that Michelle Alexander coined “the new Jim Crow.”

But I couldn’t have predicted that my generation would still struggle to extend and protect the right to vote, a full 55 years after both Congressman Lewis and the Rev. Vivian were willing to sacrifice their very lives to secure it. Sadly no victory is ever permanent. The evil forces of white supremacy and systemic racism have been working overtime since the Supreme Court gutted the Voting Rights Act in 2015 to deny Black and other marginalized communities from voting, erecting new barriers and engaging in outright voter suppression tactics.

In just one recent example, the Supreme Court’s conservative majority overruled a lower court ruling that found that forcing formerly incarcerated Floridians — who had recently won the right to vote thanks to the state’s Amendment 4 — to pay legal fees before voting constituted a modern-day “poll tax.” Now some of these 1 million newly enfranchised Floridians still will not be able to vote.

In response to these alarming trends of increased voter suppression, in 2018 Sojourners partnered with the Skinner Leadership Institute and the National African-American Clergy Network to launch Lawyers and Collars and Turnout Sunday, initiatives dedicated to equipping and mobilizing Black clergy and churches along with multiracial allies to protect the vote and fight for a free, fair and safe election. You can learn more about these efforts in this short video.

In the summer before the 2016 election, Congressman Lewis said it best: “the right to vote is precious, almost sacred. It is the most powerful nonviolent tool or instrument in a democratic society. We must use it.” I can’t think of a better way for us to honor Congressman Lewis and the Rev. Vivian than to fight to ensure that every voter is protected in November and beyond.

In this moment of moral reckoning around police violence and systemic racism, we can honor them by voting to elect leaders at every level who are committed to transforming public safety so that everyone can experience equal justice under the law.

With my sanctified imagination I can imagine both John and C.T. leaning over the balcony of heaven cheering us on. I can hear Congressman Lewis’ encouragement to never grow weary of getting into “good trouble.” I can hear C.T. Vivian remind us to never lose hope and that “leadership is found in the action to defeat that which would defeat you … You are made by the struggles you choose.” We must honor the life, legacy and sacrifice of these true American heroes by choosing the struggle of voter protection as both a test of our faith and of our commitment to real democracy.

John and C.T., may you both rest in peace and power.

(The Rev. Jim Wallis is president of Sojourners. His new book “Christ in Crisis: Why We Need to Reclaim Jesus” is available now. Follow Jim on Twitter @JimWallis. The Rev. Adam R. Taylor is executive director of Sojourners. He previously led the Faith Initiative at the World Bank Group. Follow him on Twitter @revadamtaylor. The views expressed in this commentary do not necessarily reflect those of Religion News Service.)