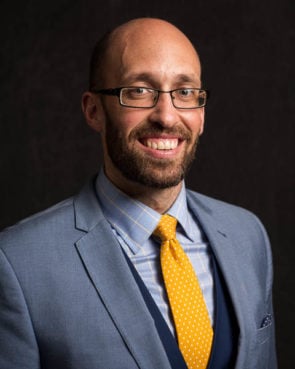 (RNS) — Before the Civil War, America was rife with prophets. One of the most riveting was one who was raised in upstate New York and had a series of angelic visions, unearthed a set of ancient records that he translated as sacred scripture. He founded a religion with thousands of believers and gathered them to a utopian community, secretly practiced polygamy even as he publicly denied its existence, drew a host of critics who denounced his tyrannical leadership and political manipulations, initiated a secret council in which he was appointed king of heaven and earth, oversaw the creation of a new constitution, and was eventually killed through an extralegal plot while under state investigation.

If you’re thinking this sounds like Joseph Smith, the founder of the Church of Jesus Christ of Latter-day Saints, you’re half-right. This description also covers James J. Strang, a man who claimed to be Joseph Smith’s successor as Mormonism’s prophet.

Strang had joined the Mormon faith only months before Smith’s death at hands of a mob in 1844, but claimed that an angel had visited him in Voree, Wisconsin, and ordained him the religion’s new leader immediately after the martyrdom. The ordination was followed by a letter that Strang asserted had come from Smith himself, written before his assassination and appointing Strang as Mormonism’s true heir.

Though he was initially dismissed as an oddity, over the next few years a growing number of Mormons found Strang’s message convincing, especially those who refused to travel west with Brigham Young. Further, Strang’s ability to replicate much of Smith’s own message — including angelic ordination and scriptural translations — led many to see him as a logical inheritor of the prophetic mantle. 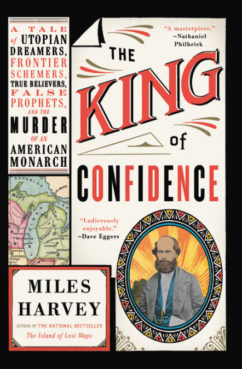 Strang maintained a firm following for the next decade, and eventually moved the faithful to Beaver Island, Michigan. Once there, he drew national attention, underwent a series of transformations, and was even elected to the state legislature. But like his predecessor, Strang’s true skill was in enticing enemies, which ultimately led to his downfall at the hands of disgruntled former believers in 1856.

While Strang’s story is a fascinating reminder of the broader spectrum of Mormon movements outside the LDS tradition, it has rarely garnered the attention its extravagance deserves. There have been a handful of excellent scholarly biographies — Vickie Speek’s “God Has Made Us a Kingdom” is a personal favorite — but few popular histories. Yet Strang will finally get the national attention he always craved with a new work from bestselling author Miles Harvey: “The King of Confidence: A Tale of Utopian Dreamers, Frontier Schemers, True Believers, False Prophets, and the Murder of an American Monarch.”

In Harvey’s telling, Strang is a prism through which we can understand how “the mid-nineteenth century was a time when everything — even time itself — seemed indeterminate, malleable, open to new rules.” It was “an era when wild dreams and lunatic fantasies could quickly metamorphose into hardened facts.” And when everything seemed unmoored, and all interactions appeared forced of falsified, “confidence” was the “de facto currency.”

It was Strang’s ability to draw on this anxiety and present a “confident” message, in other words, that allowed him to achieve such success.

What ensues is a riveting tale told in lively prose and gripping anecdotes, as well as a wealth of references to contemporary authors like Hawthorne and other men that Harvey believes captured the tenor of the century. Harvey is a master storyteller, and his skills are in full display.

What’s remarkable about Harvey’s Strang, however, is not just how much confidence defined the prophet’s mission, but also how little religion did. The Voree prophet’s angelic visitations are mostly glossed over — some are even relegated to endnotes — or merely framed as a claim to authority or literary framing. His revelations are hardly mentioned at all, his theology largely absent, and his utopian vision demoted to a land scheme.

Harvey is singularly interested in exploring how a career fraudster could seduce believers. And as much as he insists that the biography is an attempt to understand Strang’s day, his rhetoric and framing indicate Harvey’s real focus is our own.

For just some examples, Harvey highlights how Strang used newspapers to “manufacture” public opinion and “manipulate” narratives, and how “mass media” served as his “blue smoke and mirrors.” In a “concussive period of change,” Strang offered his followers, many of whom were “losers in … economic, demographic, and social convulsions,” a permanent “sense of belonging and purpose.” Strang was so successful, Harvey writes, because he “was prepared to turn other people’s anxiety to his own advantage.”

In Harvey’s view, it didn’t matter whether Strang believed his own declarations. What mattered was how he convinced others to do so, driving a wedge into an already divisive culture.

Even if Strang’s face is found on the cover, and his name throughout the text, it is hard to see this book being about anyone so much as Donald Trump, an attempt to understand how a conman can fool legions of religious Americans. His is the study of how a “culture of commonplace deception” can give “rise to a pandemic of distrust,” resulting in confidence men building their campaigns on fraud rather than facts.

“People like James Strang never really vanish,” Harvey admits at the end of his tale, as whenever the time is right, “they reappear, wearing a new guise, exploiting new fears, offering new dreams of salvation. Americans are fixated on such figures, especially in periods of profound social and economic upheaval.”

It’s not the first time prominent cultural figures have looked to Mormonism’s past to understand contemporary events. Jon Krakauer used the religion to understand 9-11 Islamic fundamentalism, for instance. But it’s another example of how Mormonism — its history, its figures, and its culture — continues to serve a malleable role in American society, often being shaped and shifted to fit whatever is needed at the moment.

(Benjamin E. Park teaches American religious history at Sam Houston State University and is the co-editor of Mormon Studies Review. He is the author, most recently, of Kingdom of Nauvoo: The Rise and Fall of a Religious Empire on the American Frontier (W.W. Norton/Liveright), and is currently working on a general history of Mormonism in America.)

RNS interviewed him about Kingdom of Nauvoo in February, which you can access here.