(RNS) — Last Friday (July 24), the Supreme Court declined for the second time in eight weeks to provide injunctive relief to a church that wanted to hold in-person worship with more attendees than state rules allowed. Once again it was Chief Justice John Roberts who joined the court’s liberal wing in a 5-4 vote.

One is tempted to say, “Get a grip, boys.” But the legal battling over churchgoing in the time of COVID-19 is just the latest front in the conservative struggle for greater religious liberty. Kulturkämpfer müssen kämpfen, as the Germans say. Culture warriors gotta make war.

The case at hand, involving a Calvary Chapel church in Nevada, was arguably a closer call than the May 31 ruling, which concerned a church in California, though the court this time (as is not uncommon) offered no explanation for its ruling. Justices Samuel Alito, Neil Gorsuch and Brett Kavanaugh all issued dissenting opinions, however, judging Gov. Steve Sisolak’s phase two reopening plan to violate the constitutional guarantee of religious free exercise.

As in all these cases, the central question has to do with how houses of worship are treated relative to various secular institutions and activities.

Sisolak’s plan treats them like museums, art galleries, zoos, aquariums and movie theaters, mandating that attendance be “the lesser of 50% based on listed fire code capacity or fifty persons,” i.e., 50 attendees at most. In multiplex cinemas, that means a maximum of 50 per screen, a rule that clearly applies as well to houses of worship with multiple worship spaces (though the church and Gorsuch in his dissent claimed otherwise).

The major objection was that the plan doesn’t treat churches like casinos, the opening and regulation of which was turned over to Nevada’s powerful Gaming Control Board. Under the board’s regulations, casinos can operate at 50% capacity, without the 50-person limit applied to worship spaces. The dissenting justices were shocked, shocked to discover that a lot of people are gambling in Las Vegas.

“Patrons without masks are seen at close quarters, and the State has not brought to our attention any evidence that it has cracked down on non-complying casinos,” wrote Alito. “In sum, the directive blatantly discriminates against houses of worship.”

In fact, on July 1, the Gaming Commission announced that it had opened 111 cases against gaming establishments for violating Sisolak’s COVID rules.

“The world we inhabit today, with a pandemic upon us, poses unusual challenges,” wrote Gorsuch. “But there is no world in which the Constitution permits Nevada to favor Caesars Palace over Calvary Chapel.”

Gorsuch didn’t mention it, but the plan does bar all public attendance at musical performances, live entertainment, concerts, competitions and sporting events, while keeping nightclubs, adult entertainment venues, and brothels entirely closed. So at least Nevada is constitutional enough not to favor Mustang Ranch over Calvary Chapel.

Evidently, that wasn’t sufficient to persuade the chief justice to agree to an injunction. 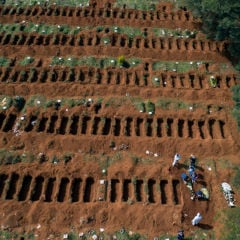 News
Brazil’s evangelicals, bound to Bolsonaro, fight to follow his lead on pandemic