(RNS) — In a conference call with conservative pastors back in April, Secretary of State Mike Pompeo said he thought the report of his Commission on Unalienable Rights would “return America’s understanding of human rights … back to the fundamental moorings of the Judeo-Christian tradition on which this country was founded.”

A few days ago in The Atlantic, James Loeffler, who teaches Jewish history at the University of Virginia, claimed this was no more than Pompeo’s way of pretending that his own conservative Christian view of human rights is applicable to all faiths.

“Except that tradition never existed,” writes Loeffler. “The ‘Judeo-Christian tradition’ was one of 20th-century America’s greatest political inventions. An ecumenical marketing meme for combating godless communism, the catchphrase long did the work of animating American conservatives in the Cold War battle.”

For the record, the Judeo-Christian Tradition (JCT) was first pressed into public service prior to World War II, when fascist organizations like the “Christian Mobilizers” and the “Christian Aryan Syndicate” used “Christian” to signal their hostility to Jews. It was Christian and Jewish liberals who, against this rising anti-Semitism, adopted “Judeo-Christian” to make Judaic involvement in the Western religious project explicit.

After the war, the JCT did indeed become an anti-communist trope, now embraced by conservatives as well as liberals as the emblem of America’s common religious cause. But it was more than that. Neo-orthodox Christian theologians, led by Reinhold Niebuhr, made a point of emphasizing the Hebraic (as opposed to the Hellenic) dimension of Christianity, pointing particularly to the role of Israel’s prophets in establishing a core feature of the two faiths.

With the waning of the Cold War in the 1960s, the JCT fell out of favor with the left when it was associated with fostering an exploitative approach to the natural environment. The following decade the new religious right, led by Jerry Falwell, rushed to embrace the concept, attributing to it their own anti-abortion, anti-feminist and anti-gay rights agenda. Pompeo’s reference to the JCT was 40-year-old culture war boilerplate.

I know all this because, well, I was the first person to write a history of the JCT. Since my “Notes on the Judeo-Christian Tradition in America” appeared in the American Quarterly in 1984, other academics have written on the subject, most recently and importantly the Harvard Divinity School’s Healan Gaston, whose “Imagining Judeo-Christian America” was published by University of Chicago Press last year.

UVA’s Loeffler, who relies on Gaston’s comprehensive survey for his evidence, is the latest in a 70-year-old line of Jewish writers to express dislike for the JCT. In his view, it 1) disguises a history of Christian dismissal of Judaism in the U.S.; and 2) fails to account for the religiously diverse America of today. But, true as both may be, they are irrelevant when it comes to Loeffler’s criticism of Pompeo’s remark.

As for whether America’s understanding of human rights derives from the JCT, no doubt the history of both religions provides a less than perfect record of accomplishment. Nevertheless, I think we can find a scriptural mooring here and there.

Take, for instance, the fourth chapter of the Book of Deuteronomy, in which Moses tells the Israelites to worship God even as other peoples have been given the sun, moon and stars to worship. It’s kind of a recognition of religious liberty à la the First Amendment.

Then there’s Leviticus, chapter 19, where God lays down the law that there be no reaping to the edges of fields, no gleanings of the harvest and no picking bare or gathering of fallen fruits of vineyards — all of which is to be left for the poor and the stranger. I’d say that reasonably anticipates the inclusion of economic rights in the Universal Declaration of Human Rights (signed by the U.S.), which the report of Pompeo’s commission acknowledges as “essential to a comprehensive foreign policy.”

So sure, the JCT wasn’t invented as a political catchphrase until the 20th century. But just as Molière’s Monsieur Jourdain only belatedly learned that he’d been speaking prose all his life, so America took a couple of centuries to accurately identify its religious antecedents. And if Loeffler wants to prophesy against it, he’s well within the tradition to do so. 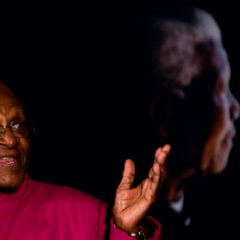