(RNS) — The offering of food and material goods to monks is an essential part of the daily practice of Buddhism in Thailand. The belief is that through the act of giving, lay Buddhists – followers of the faith who have not been ordained – receive, or make, merit.

This making of merit is believed to negate the effect of past evils in the giver’s present life, as well as the next. Scholars call this the “Buddhist moral economy,” or economy of merit. This exchange binds monks and laity together. Lay Buddhists make merit in many ways, donating time, goods and money, depending on their circumstances.

As a scholar of contemporary Buddhism in Thailand, I am researching the adaptation of the economy of merit during the coronavirus pandemic. I’ve found that as a result of the pandemic, monks are increasingly providing material goods, such as hot meals and nonperishable items, for laypeople – thereby reversing roles within this moral economy.

The traditional economy of merit

Since the time of the Buddha, around the sixth century B.C., donations have sustained monastic communities. Laypeople provided food, clothing, shelter and medicine to monks that allowed Buddhism to be spread from India to East Asia, Southeast Asia and the Himalayan regions.

Monks, at the top of the Buddhist social hierarchy, are considered to have the most merit. Through a disciplined lifestyle and dedication to study and practice, they are considered worthy recipients of gifts and offerings.

As translated by Bhikkhu Bodhi, an American monk in the Theravada tradition, the Buddha called his disciples “the unsurpassed field of merit for the world.” Hiroko Kawanami, an anthropologist who studies Myanmar, writes that monks are considered a field of merit “into which lay donors ‘plant’ their goodwill offering and later ‘reap’ improved karmic states.”

This economy of merit links laypeople and monks together like a family. I have heard many Thai Buddhist monks refer to laity like their children, and conversely, laypeople take care of monks like respected elders.

Monks are mostly receivers of this generosity, except on few occasions when they redistribute some of their offerings to laity. These special days could include a senior monk’s birthday. 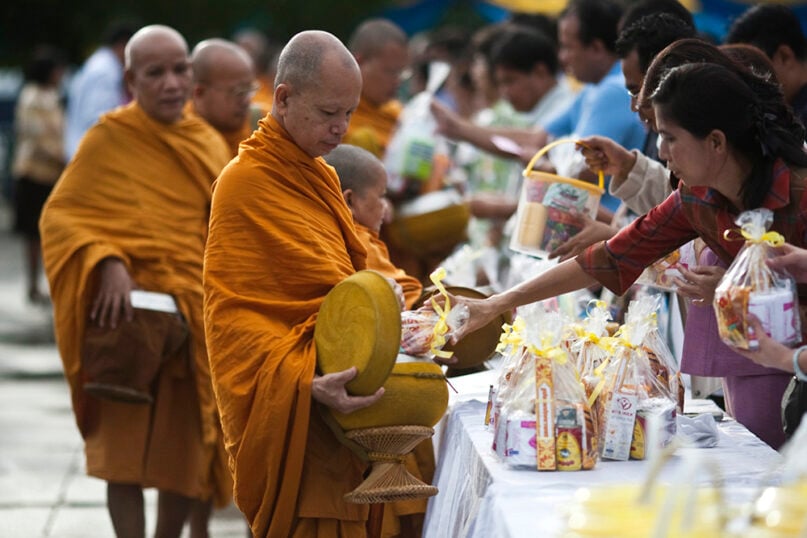 There might be other times too when monks donate. During my time in Chiang Mai, Thailand, in May 2018, I observed monastic programs that collected clothing and canned foods from laypeople in order to donate to poor villages.

In Myanmar, monks and nuns give away surplus donations as a show of gratitude to their supporters.

In times of major societal disruption, such as when the 2004 tsunami hit southern Thailand, temples acted as shelters, while monks and nuns helped with relief efforts. Monks also volunteered to assist in delivering food and shoring up dikes during the 2011 major flood in Bangkok.

This reversal of traditional roles within the economy of merit is happening now in Thailand and other countries with large Buddhist populations, such as Sri Lanka.

Buddhist monks are mobilizing to provide basic necessities for lay communities due to the economic difficulties caused by the coronavirus.

It is estimated that over 8 million people – about 12% of the Thai population – might lose their sources of livelihood as a result of the pandemic.

To alleviate their plight, many temples in Thailand are working with their communities to feed those in need.

I spoke with monks in Chiang Mai, northern Thailand, in June and July 2020, and they told me how monks throughout the country are receiving and distributing food to their communities.

Monks generally post an announcement on Facebook for community members to donate what they can. Wat Sansai Don Kok in Chiang Mai, for example, set up an offering table in the temple where about 200 people donated each day in May.

With the money and food collected, monks and temple supporters make meals to help feed the community.

The idea of monks cooking is unusual in Thailand, as it is typically against monastic rules. But given the circumstances, preparing food is considered acceptable, said a Chiang Mai monk during a conversation with me on July 1, 2020.

Monks collect and redistribute offerings for those in their immediate surroundings and also travel to villages to support those in need.

At Wat Tha Luang in Phichit Province, northern Thailand, the abbot has made efforts to feed one meal per day per person during the quarantine period. Media reports showed thousands of villagers, including children, elderly and disabled, lined up to receive boxed lunches.

This reversal of roles between monks and lay Buddhists has helped improve the image of monks in Thai media, which prior to the coronavirus had a tendency to focus on monastic excesses, such as riding in a private jet, taking trips to the mall and embezzling money.

It has also shown that material goods do not always have to flow exclusively from laypeople to monks.

(Brooke Schedneck is Assistant Professor of Religious Studies at Rhodes College. This article is republished from The Conversation under a Creative Commons license. Views expressed in this commentary do not necessary reflect those of Religion News Service.)