(RNS) — Last year, about 35,000 people visited Pittsburgh’s St. Anthony Chapel, one of five churches grouped recently under the Catholic diocese’s Shrines of Pittsburgh designation. The chapel houses some 5,000 relics — the largest number outside the Vatican, by its count — including what it claims are splinters of the true cross and a barb from Jesus’ crown of thorns.

Many congregants who come to mass at the shrine have told Rev. James Orr, the shrine’s co-director, they crave physical signs of faith during the pandemic.

“The faith is tangible. It’s about Christ touching people. The sacraments all involve touch,” he said. “That’s what made the whole quarantine thing such a very real trial for our people, because we were out of touch.”

Like sacraments, relics convene deeply personal encounters, wherein adherents touch Jesus and one another and connect to saints who lived many centuries ago, according to Orr. 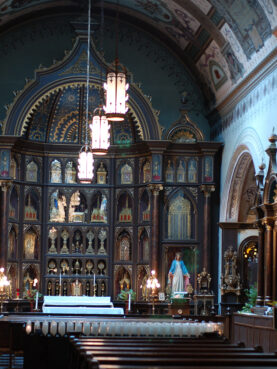 “You can’t do that through Zoom,” he said. “You can talk to someone on Zoom, but you can’t touch them. It’s not the same thing.”

For centuries, relics have inspired and comforted in dire times. That’s particularly true of the Shroud of Turin, which became a beloved relic during the Black Death. And the medieval history of relics has a lot to say to the socially distant craving human contact, according to Gary Vikan, former director of Baltimore’s Walters Art Museum and author of the new book “The Holy Shroud: A Brilliant Hoax in the Time of the Black Death.”

While millions of believers hold the linen Shroud of Turin to be Jesus’ actual burial cloth retaining his bodily imprint, Vikan sees it as “the greatest deception in the history of Christianity,” he writes.

But that doesn’t matter. It’s still a work of “artistic genius,” said Vikan, capturing the impression of a body in the round in a single piece of cloth.

And it came along at the right time, when people needed tangible signs of hope.

Medieval Christians living through England’s and France’s 100 Years War and the Black Death, which may have killed a third of Europe’s population from 1347 to 1351, saw death and corpses everywhere they turned. They were primed, Vikan writes, to receive and venerate images of their savior, and their art had already become gorier to reflect their dire circumstances.

When the dean of a church in Lirey, France, associated with the famous knight Geoffroi de Charny, began displaying what he called the sudarium (sweat cloth) that had wrapped Jesus’ face, he was able to market the relic successfully to an eager public.

The church, Vikan writes, “had suddenly struck the pilgrimage jackpot.” (At the time, custodians of sacred relics could charge ballpark prices, so to speak, for room and board and souvenirs.)

The Lirey Collegiate Church dean and canons “fueled rumors among the gullible that this was indeed the true Shroud of Jesus,” Vikan said. The officials knew it wasn’t a relic, but they displayed it “to the faithful with all the pomp and ceremony reserved for relics, and then let its charisma go to work.”

Custodians of the shroud exhibited it for public veneration despite the fact that Pope Clement VII (who reigned 1523 to 1534) had only permitted the shroud’s display as a “representation” of the burial cloth.

A full-length 1931 photograph of the Shroud of Turin, which is said to have been the cloth placed on Jesus at the time of his burial. Photo by Giuseppe Enrie/Creative Commons

Eventually, the Shroud of Turin would become one of the most well-known and beloved relics in the world.

In 1989, a reporter asked Pope John Paul II about the shroud in an inflight press conference half a year after it had been carbon dated. The pope called the shroud a “relic,” according to Vikan’s research, only to have his PR team clarify that he meant a holy image. Speaking in Turin in 1998, Pope John Paul II called the shroud a “mirror,” “image,” and “icon,” Vikan writes, and since then, Popes Benedict XVI and Francis I have referred to it as an “icon.”

Just as the faithful clung to religious iconography — whether true relic or icon — during pestilent periods in the Middle Ages, relics remain relevant to the hopeful in the modern era.

For example, Vikan pointed to several visits he made to the Catholic church in Chimayó, New Mexico, which has a reputation for healing. Each time, a few thousand people were there. During his visit, he picked up a church brochure, featuring a photograph of 30,000 pilgrims visiting after World War II.

“Clearly, this place meant something more in a time of stress,” he said. “That stuck with me.”

Even those who don’t believe in the saintly nature of those whom relics touched can draw inspiration from them, as they would a family heirloom, according to Orr, the priest in Pittsburgh.

“If they’re convinced that this particular piece of wood in fact is from that first and only cross, then it creates that same kind of connection that holding on to a lock of hair of your loved one does,” he said. “You don’t believe that the lock of hair is your loved one, but it certainly is of your loved one. You’ve got that with that relic of the true cross or any other relic.”