CASTEL GANDOLFO, Rome (RNS) — Seven years ago, Pope Francis announced that, unlike his immediate predecessors, he would not spend the summer at the papal estate at Castel Gandolfo.

Citizens of this picturesque village a half-hour's drive from the Vatican, said the sudden change left them “feeling orphaned.”

In past Augusts, the town's main piazza would hosts thousands of tourists and pilgrims gathered to receive the pontiff's blessing, offered from the balcony of the papal palace, which itself would be bustling with officials, cooks and other staff.

Despite the emotional and financial hit of Francis' absence, locals here are convinced that learning to live without the pope's visits will force Castel Gandolfo to come into its own.

Fausto Di Bernardini, born and raised in Castel Gandolfo, owns a small souvenir shop on the main square filled with religious trinkets, magnets, and T-shirts. He has seen seven popes and watched his town transform through the decades. Now he serves a few straggling, mask-wearing tourists — mostly Italians from close by.

“We loved the pope and his presence,” di Bernardini told Religion News Service in an interview on Wednesday (July 12). “We loved those three months when he was here. We felt protected by his presence.” 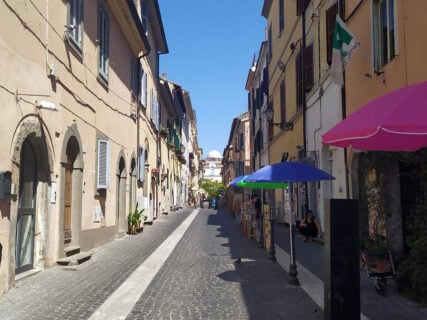 Looking up the mainly vacant 'Corso della Repubblica' in Castel Gandolfo, towards the pontifical palace, with one of the domes of the Vatican Observatory on top, Wednesday, Aug. 12, 2020, in western Italy. RNS photo by Claire Giangravé

Di Bernardini’s business “isn’t going too well” and has suffered a 90% decline since Francis became pope. The COVID-19 pandemic has exacerbated the economy of the town, further shrinking the number of tourists and their spending habits.

“There are days where it makes no difference whether we open shop or not because there is no tourism, no nothing,” he said, as he carefully polished the contents of his shop.

After Francis’ announcement, bed and breakfasts sprouted up, and many streets have been transformed into an open-air restaurant offering the area’s traditional spiced pork and local dry red wines.

Bernardini said he is confident that tourism will increase once a vaccine for coronavirus is available, but he believes the loss of the pope and the media attention he brought to the town will have more lasting consequences. It's only a matter of time, he believes, before the pope-based economy dies out altogether. “We wait for better times for as long as we can resist,” he said.

The depression is not only economic. In October 2016, Francis transformed the palace into a papal museum with the hope of promoting tourism and income for the town. The Castellani, as inhabitants of Castel Gandolfo are known, welcomed the idea, but some residents still feel something else is missing.

“The problem is that for me this is a matter of the heart,” said Maurizio Carosi, owner of Emporio del Vino, a wine shop facing the main square. Carosi, who remembers the excitement he felt as a child when Pope John XXIII came into town in the early 1960s, said the museum only answers the “venial concerns” tied to the presence of the popes.

“I would much rather they closed the palace and the pope returned. Some colleagues of mine would probably say I’m crazy, but that’s what I think!” he said, adding that he is still confident that Francis will visit Castel Gandolfo one day. The town of Castel Gandolfo, with the pontifical palace at top right, above Lake Albano in western Italy. Photo by Deblu68/Creative Commons

In the first two years after Francis’ decision, the town sent a flurry of requests to the Vatican to reconsider. The mayor of Castel Gandolfo, Milvia Monachesi, gave interviews in which she described a town “in mourning.”

Not all popes have seen fit to spend their summers here. The first pope to reside in Castel Gandolfo was Urban VIII in 1628, but his successor, Pope Innocent X, never visited in his 10-year pontificate.

In the 17th century, the town went 44 years without a papal visit, until Pope Clement XI fell ill in 1709 and decided to recuperate in Castel Gandolfo on the advice of doctors. He enjoyed his stay so much he designated the palace as a “Pontifical Villa” and granted the Castellani the rights shared by subjects of the Papal States.

After that, popes came and went. Pope Clement XIV visited every summer of his seven-year pontificate in the 1760s and '70s, donning papal white equestrian clothing and riding so fast that his party could not keep up, according to Emilio Bonomelli's 1983 book "The Popes in the Countryside." Following the unification of Italy in 1870 until 1929, when the Italian government recognized the independence of the Vatican State and its papal villas, popes were rarely seen in town. 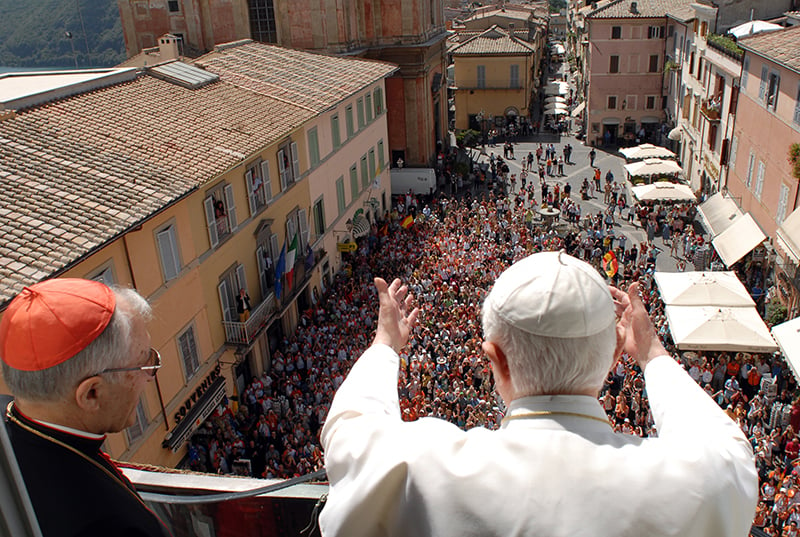 Pope Benedict XVI, right, greets the faithful from the balcony of his summer residence in Castel Gandolfo, on the outskirts of Rome, as Archbishop of Madrid, Cardinal Antonio Maria Rouco Varela stands beside him, at the end of a special audience of young people from the diocese of Madrid on Aug. 9, 2007. Photo courtesy of Osservatore Romano

In 1938, when Fascist dictator Benito Mussolini imposed racial laws, Pope Pius XI spoke from the palace balcony to denounce racism and nationalism. During Allied bombing raids in 1943, the pope welcomed the Castellani and citizens of nearby towns to take refuge in the palace. It provided asylum to a number of Jewish refugees, and during the war more than 50 children were born under its roof.

The ties between the Vatican and the town deepened as the 20th century wore on: Pope Pius XII, who led the Catholic Church during the Second World War, died there, as did Pope Paul VI, the author of Vatican II.

Pope John Paul II used to call the lakeside town “Vatican II” and had a pool installed at the villa, leading paparazzi to attempt to snap a picture of the pontiff bathing. Pope Benedict XVI was a fan of Castel Gandolfo and took a helicopter there following his historic resignation in 2013.

“The fact that the pope no longer visits is a matter of fact,” said Stefano Carosi, who owns the town's historic Carosi Café. But he boasts that “the castle is operational, and now it walks on its own two feet.”