WASHINGTON (RNS) — The Rt. Rev. Mariann Budde, the Episcopal bishop of Washington who criticized President Donald Trump after he held a Bible aloft during a photo op in front St. John’s Church near the White House in June, focused her prayer for the Democratic National Convention Tuesday evening (Aug. 18) on a Christian appeal to grace.

She then called for the “blessing of God, the source of all goodness, truth and love,” to “inspire us all to realize Dr. King’s dream of the ‘beloved community,’ Congressman Lewis’ dream of a ‘just society’ (and) President Lincoln’s dream of ‘a more perfect union’ in this country, in our time.”

Budde told Religion News Service on Tuesday that her prayer was meant to appeal to the “higher angels of our nature” but that she was “not naive” about why Democratic Party officials asked her to deliver the blessing. She explained that it likely related to her criticism of Trump in the days after he posed for cameras while holding a Bible in front of St. John’s Episcopal Church, across Lafayette Square from the White House.

Minutes before the president’s arrival at the church, the square was forcibly cleared of demonstrators by law enforcement officials, who also expelled an Episcopal priest and seminarian from St. John’s grounds. The two were working on behalf of the diocese Budde runs, offering aid to protesters.

“The symbolism of him holding a Bible … as a prop and standing in front of our church as a backdrop when everything that he has said is antithetical to the teachings of our traditions and what we stand for as a church — I was horrified,” Budde told RNS at the time.

About two weeks after the incident, Budde, a seasoned demonstrator in protests against gun violence and on other issues, joined a slate of faith leaders outside St. John’s who railed against racism, police brutality and the Trump administration’s response to the ongoing coronavirus pandemic.

But Budde said she drew a line when Democratic Party officials — and some in her own circle — suggested she film her Democratic convention prayer in front of St. John’s, explaining that her prayer is neither an endorsement nor partisan.

“I would have prayed the exact same prayer at the Republican National Convention if they asked me,” she said. 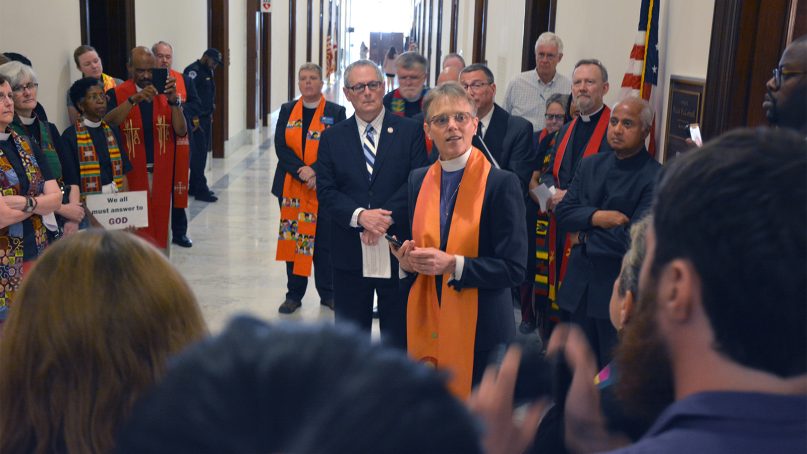 Budde said she expects some Episcopalians may disagree with her decision to participate in the convention at all. She noted pushback she received from a separate incident in 2017, when she, along with leaders at the Washington National Cathedral, faced criticism for hosting an interfaith prayer service as part of Trump’s inauguration, per long-standing tradition.

In preparation for her DNC prayer, Budde consulted with the Rev. Russell J. Levenson, an Episcopal priest who served the congregation of former President George H.W. Bush and prayed at the 2012 Republican National Convention. She said Levenson warned her via email that there may be some blowback.

But when Budde saw the lineup of other faith leaders slated to pray at the Democratic convention, such as Jesuit priest the Rev. James Martin, her concerns about participating were largely assuaged. “I love these people,” she said.

“It’s a little different praying for a party convention, as opposed to an inaugural prayer service where the will of the people has been determined,” she said. “(But) I thought, you know, why pass up an opportunity to pray, and to pray on behalf of the nation?”

She also hopes to chip away at the divisions that she says currently fracture both religion and politics in the United States.

“You can be a Christian and vote for either party,” she said.