(RNS) — Yogi Bhajan, a spiritual leader and an entrepreneur who promoted his own brand of Sikhism and founded 3HO, the Happy Healthy Holy Organization, in 1969, is probably best known as a guru who brought Kundalini Yoga to the West and formed a worldwide community of 3HO ashrams.

Over the years, the organization grew from a small group of hippies who spread out around the United States to teach yoga into a behemoth of nonprofit and lucrative corporate entities that continued to flourish even after his death in 2004.

His controversial legacy is getting new scrutiny.

A new report from An Olive Branch, a Pittsburgh-based consultancy guided by Buddhist principles that specializes in helping spiritual communities navigate ethical misconduct, concluded that “more likely than not” Bhajan used his power as a spiritual leader to perpetrate a range of abuses against women and female minors that included rape, sexual battery, sexual abuse and sexual harassment.

Rumors of abuse and misconduct shadowed Bhajan since his arrival in the United States in 1968.

But the report by An Olive Branch is significant because it was initiated by the Siri Singh Sahib Corp., the umbrella entity that includes 3HO. The report is the first documented and well-sourced accounting of this alleged misconduct by a third-party organization.

The SSSC declined to comment on the report to Religion News Service.

In a statement emailed to RNS, the group said it has engaged a consultant to institute a program of “compassionate reconciliation” using restorative justice principles. 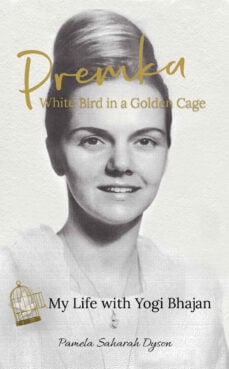 “We acknowledge the reporters of harm for their bravery in sharing their experiences, and providing support to these individuals will be our highest priority,” they wrote. “We also acknowledge those who suffered harm but did not come forward to report their experiences. SSSC and its related organizations are taking immediate action to address the findings of the report, assist reporters of harm, and promote healing in our community.”

The Siri Singh Sahib Corp. commissioned the report after Pamela Sahara Dyson, a former high-ranking member and administrator of 3HO, released her self-published memoir, “Premka: White Bird in a Golden Cage: My Life With Yogi Bhajan,” in January.

The book documents Dyson’s troubled relationship with Bhajan and his prescriptive, restrictive lifestyle. She alleges that he coerced her and other staff members into having sex with him. After the memoir’s release, other women came forward with their own allegations of sexual misconduct.

A private Facebook group dedicated to discussing the memoir became a venue for over a dozen other survivors to share their own stories of various forms of abuse.

Suzanne Jordan, moderator of the Facebook group, described it as a space for former and current members of 3HO as well as Kundalini Yoga teachers and students.

“For most members, this group is the first time they have been heard, believed and supported,” Jordan said.

Bhajan was born Harbhajan Singh Puri in 1929 in what today is Pakistan. He came to the United States by way of Canada in 1968 after working as a customs officer at Delhi’s Palam Airport.

He began teaching a vigorous and meditative form of yoga he called Kundalini Yoga in Los Angeles and quickly gained followers who then spread throughout the country and formed ashrams and yoga centers of their own.

Bhajan claimed to be a Sikh religious authority, taking the title “Siri Singh Sahib” or “chief religious and administrative authority for the Western Hemisphere.” Sikhs in India and the diaspora disputed the title. 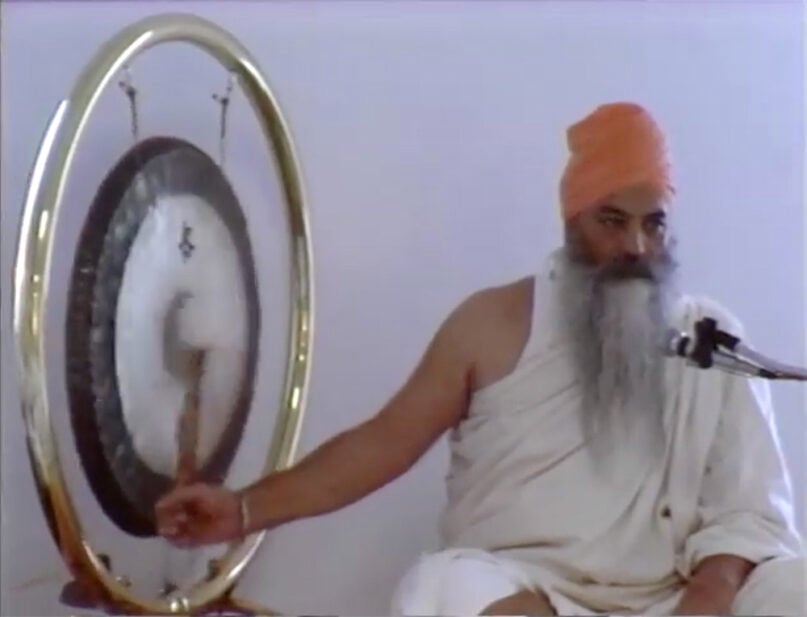 Many of his students converted to the Sikh religion, or Sikhi, a tradition founded in 15th-century Punjab by Guru Nanak. Bhajan’s primarily white, middle-class students stood out as rare Western converts to Sikhi with their distinctive turbans, uncut hair and all-white clothing.

By the mid-1970s, 3HO melded yoga and their form of Sikhi, which they called Sikh Dharma, into a distinctive lifestyle and identity. Larger communities were established in Los Angeles; Española, New Mexico; and Herndon, Virginia.

Several members established businesses that were subsumed into 3HO.

Among them are Yogi Tea, Peace Cereal and Akal Security, a billion-dollar business with government contracts to provide security for federal courthouses and embassies, among others. In the 1980s, 3HO boarding schools were established in India and Bhajan encouraged followers to send their children there, some as young as 5 years old.

After years of declining health, Bhajan died in 2004.

Several years later came a series of legal disputes to control the empire he once held sole authority over. This resulted in a 2008 settlement that installed a board known as the Siri Singh Sahib Corp., which oversees the cluster of for-profit and nonprofit entities.

This current crisis within the SSSC has brought to the forefront allegations that have circulated within the community for years.

Over the course of two months, An Olive Branch heard testimony from sources — whose identities have not been made public — alleging sexual misconduct by Bhajan.

AOB expected to conduct approximately 20 interviews. In the end, it heard testimony from 299 individuals.

Nearly half of those who spoke with AOB supported Bhajan. Some supporters organized a campaign that flooded AOB with letters and statements defending Bhajan and rebutting the allegations against him.

Bhajan’s defenders described his alleged ability to read auras, his disciplinarian teaching style and his enlightened nature as justifications and/or explanations for his conduct. One defender even told An Olive Branch: “Yogi Bhajan is not a random priest. He is like Christ or the Buddha.” 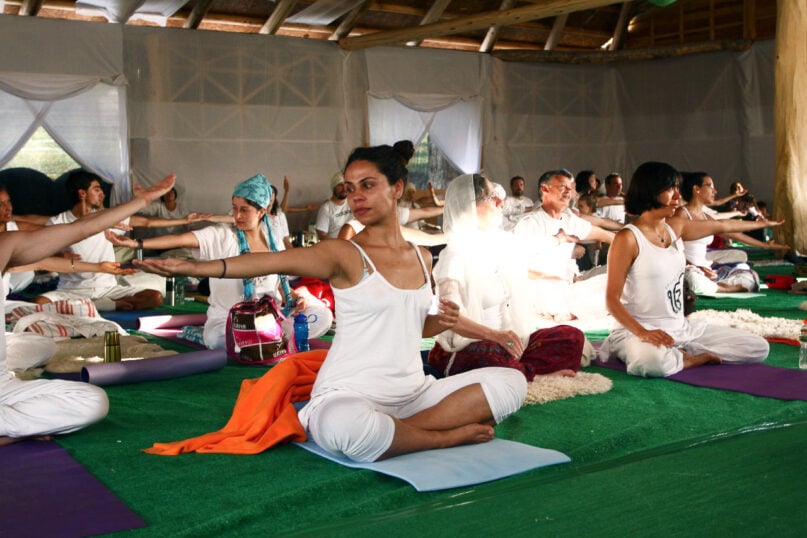 A Kundalini Yoga class in Santiago, Chile, in 2011. Photo by Jaime Ramos/Creative Commons

Such God-like reverence for Bhajan “created an environment that facilitated Yogi Bhajan’s sexual and related misconduct,” according to the report.

The report also noted other concerns about 3HO. Bhajan managed his followers by controlling access to information and directing major life decisions such as whom to marry, when to have children, whether to go to college or start a career.

The culture within 3HO discouraged criticism of Bhajan. Those who raised questions could be shunned or threatened by Bhajan himself. One person who talked with AOB reportedly recalled Bhajan saying, “If you cut your hair, I will slit your throat.”

Despite the threat over cutting hair, the report also claims Bhajan asked women to shave off their pubic hair — a violation of Sikh beliefs.

“One of the ways the Sikhs of 3HO/Sikh Dharma claimed to be more orthodox than their Punjabi immigrant counterparts was they strictly followed the code of conduct forbidding the cutting of any of their hair,” said Verne Dusenbery, a professor emeritus of anthropology at Hamline University in St. Paul, Minnesota. “So, these reports on Yogi Bhajan especially undermine 3HO/Sikh Dharma’s claims to being exemplary Sikhs.”

A code of silence enabled Bhajan to commit a wide range of abuses. Despite his claim of being celibate, the report alleges he had sex with multiple partners at the same time, directed female followers to have sex with other women and groomed girls for later exploitation by showing them pornography and discussing sex graphically. 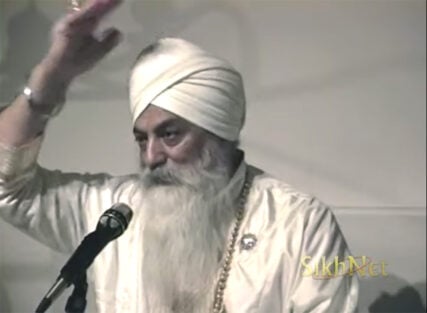 Despite the detailed claims of abuse and the reasons they occurred, AOB did not offer concrete recommendations as to what the 3HO community could do in the wake of the findings.

The report concluded with the rhetorical question “Going forward, can the community rally around Yogi Bhajan’s own advice to ‘Follow the teachings, not the teacher?’”

Matthew Remski, a Toronto-based cult researcher and co-host of the Conspirituality Podcast, said in an interview that religious organizations should not investigate each other and that such reports are better conducted by an organization such as a law firm. “The report reveals the limitations of investigations that are not primarily centered on survivors but are prematurely focused on keeping organizational structures intact.”

The numbers within the report by An Olive Branch do not represent the total number of abuses, according to former members and the SSSC’s preface to the report. Many survivors who alleged abuse by Bhajan chose not to participate in a report commissioned by an organization they deem to be their abuser.

One lawsuit has been filed against SSSC in Los Angeles by Sunny Khalsa, a woman raised in 3HO, and alleges she was subjected to sexual abuse/sexual battery, intentional infliction of emotional distress and failure to report suspected child abuse, among other charges.

The scope of the report was also limited and did not include many other allegations of abuse and misconduct that have surfaced in media reports and in public accounts by former members. These allegations include financial exploitation, fraud, criminal activity and widespread abuse of children in 3HO-run boarding schools in India.

Harinder Singh, co-founder of the Sikh Research Institute, said he is not surprised by the report’s findings but is concerned about repairing the damage done to survivors and dismantling the claims Bhajan incorrectly made connecting yoga to the Sikh tradition. “Will the supporters of Yogi Bhajan allow real healing for the reporters of abuse?” he added.

The report has also caused many of those who teach and practice Kundalini Yoga as taught by Yogi Bhajan to wonder how they can continue to associate themselves with a man who “more likely than not” committed a range of abuses against women and children.

Libby Lydecker, who lives in Los Angeles, has practiced Kundalini Yoga for more than 20 years and became a certified teacher in 2007. She said it is hard now to even say Bhajan’s name. “It is so painful … I will not let the hypocrisy make me bitter, but it is very hard.”

Washington, D.C.-based Shabd S. Khalsa, 32, was born into 3HO and attended the boarding schools in India. He continues to follow what happens within 3HO closely and still has family members who are part of the organization.

Khalsa described the report as “monumental” but still feels it is “very limited in scope” because the AOB was commissioned only to address sexual misconduct by Bhajan.

“It’s commendable that an organization has opened itself up in this way,” he said, “but how it moves forward will be its true test.”

Opinion
What Christians can learn from Indian Sikh farmers’ desperate protests
Articles of Faith
In 2020, a small but timely library of Sikh history
Signs of the Times
Pope’s new book speaks to Americans on racism, immigration and gender equity
Articles of Faith
On the anniversary of his birth, a reflection on the life of Guru Nanak
Articles of Faith
Farmers’ protests against India’s new agriculture laws follow long Sikh tradition