LOS ANGELES (RNS) — For some Latino Catholics, choosing whether they support Joe Biden or Donald Trump for the United States presidency boils down to where they stand on abortion.

It doesn’t matter how much they may agree with the candidates’ positions on national policy, immigration or the economy.

Standing firmly against abortion is a an important factor in getting their vote, said Jesse Romero, who wrote the book “A Catholic Vote for Trump.” Romero describes himself as a primary-issue voter, and abortion is a primary issue, Romero said.

“Abortion is the biggest civil rights issue of today,” said Romero, 59, the son of Mexican immigrants. “Civil rights begins in the womb.”

That’s why Romero, who was born and raised in Southern California’s San Fernando Valley, is not only voting for Trump, but he’s urging other Catholics like him to do the same.

And he has company.

Though fewer than a quarter of Latino Catholics voted for Trump in 2016, the Pew Research Center found that one-third of them backs him now.

That’s compared to the 59% of white Catholics who voted for him in 2016 and still plan to support him over Biden today. 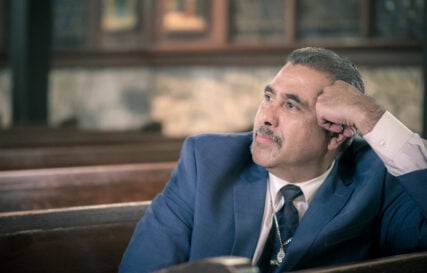 Trump’s staunch support of the pro-life cause has won him the approval of an increasingly anti-Francis right wing of the U.S. Catholic Church.

Trump boasts a record of appointing anti-abortion judges. In January, Trump’s appearance at the annual March for Life in Washington marked the first time any president has spoken in person at the event.

Biden, meanwhile, even though a Catholic himself, has a mixed record on abortion.

The democratic nominee voted against the anti-abortion amendment when it appeared before the Judiciary Committee in 1983, but in 1984, Biden backed an amendment praising the so-called Mexico City policy, which banned the use of federal money for foreign groups that provide abortion counseling or referrals. By 1987, advocates for abortion rights were already describing his voting record on the issue as “erratic.”

Latino Catholics, like Romero, are vouching for Trump despite what they see as his anti-immigration policies and divisive rhetoric about Latinos.

Since becoming president, Trump has enacted “zero tolerance” anti-immigration policies that have caused thousands of children to be separated from their families at the border. As a result, unaccompanied children have been held in cages in U.S. border facilities.

In April, Trump signed an executive order to temporarily halt people from receiving green cards to protect the country from what he described as the “Invisible Enemy.”

And, according to a 2019 Latino Decisions poll, 51% of Latino registered voters said racism against Latinos and immigrants was a major problem. 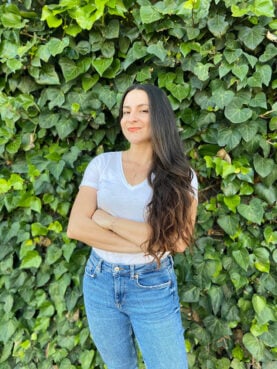 The way Veronica Flamenco, a Catholic Trump supporter, sees it, many unaccompanied minors already immigrate on their own. Flamenco, an immigrant from El Salvador, believes news media further inflamed coverage of young immigrants held in detention facilities. Instead of news reporters saying children were held in cages, Flamenco said “we can call them shelters.”

Flamenco, however, would like Trump to outline a detailed plan to manage the immigration problem at the border.

RELATED: Trump woos Catholics on abortion but may lose them on life

“The topic of abortion, I think is the most important,” said Flamenco, a marketing manager.

Flamenco said being in favor of abortion goes against human rights.

“If Trump is choosing things that are morally right, then obviously I’m going to prefer him instead of Biden who claims to be Catholic,” she said.

Regarding the LGBTQ community, Flamenco said that as Catholics, “we accept the person, but we reject the sin.” She is against same-sex marriage because “you’re changing the concept of marriage.” To Flamenco, sexual orientation is a private matter.

“If those private things become political, my religious liberty is violated because that is imposing something against my moral values,” she said.

Flamenco said many believe the same way she does, but “cancel culture” makes it difficult for people, especially in blue states, to speak openly about those beliefs. Flamenco openly discusses her Catholic faith and politics on her YouTube channel. One recent video is titled “¿CATOLICOS POR DONALD TRUMP?” 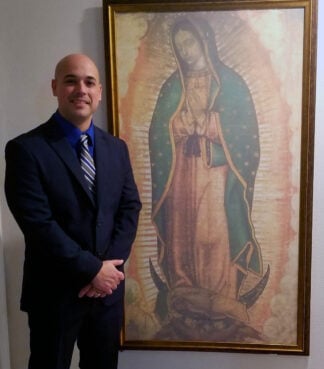 “There is a silent majority, and I know a lot of Catholics, a lot of Hispanics that will vote for Trump,” Flamenco said. “They’re not saying it out loud, unfortunately, but they’re there.”

Luis Roman, 41, of Florida, agrees. Everything is too polarized, he said.

Roman hosts a Spanish-language podcast, “Conoce Ama Y Vive Tu Fe” (Know, Love and Live your Faith), where he invites priests and talks about faith, theology and news. He said he has been called homophobic for his beliefs surrounding the LGBTQ community.

Roman said he respects gay people, but he believes sex is for procreation. That natural order should not be broken, he said.

“That’s my faith,” said Roman, who is Puerto Rican. “If I respect their beliefs, they should respect my beliefs, too.

Roman said he identified as a Democrat until 2016 when Hillary Clinton and Trump were running for president. Clinton’s stance on abortion turned him off.

Clinton, during an October 2016 debate, defended Planned Parenthood and Roe v. Wade. She said she would defend women’s rights to make their own healthcare decisions.

“We don’t support abortion for any reason,” he added.

Roman said he’d love to see a Catholic president, but he doesn’t believe Biden, who is a Catholic, “is living the faith.”