“I was worried the seminary would cancel for the coming year, but it hasn’t,” said Levin, a recent high school graduate and resident of Walnut Creek, California.

Despite its continuing entry ban on all but a few noncitizens, in July the Israeli government decided to allow some 17,000 foreign students — including 12,000 mostly American Orthodox yeshiva and seminary students on their gap year — to enter the country, under strict COVID-19 protocols.

Among them is Levin, who starts classes in September.

She’s glad to be in Israel but had worried that the program’s usual field trips and even Shabbat meals with Israeli families may be curtailed due to Israel’s ever-changing COVID-19 restrictions.

After speaking with some students who had been to the seminary under lockdown during the past academic year, she was reassured that things would work out fine.

“They said the experience wasn’t quite the same, but still great,” Levin said.

Allowing students like Levin into the country has been controversial. Israel is struggling to contain the coronavirus and is denying many requests for family reunification.

Some lawmakers accused the government of caving in to pressure from ultra-Orthodox political parties, which threatened to bring down the government if the students weren’t allowed into the country.

“Why are yeshiva students and (other) students allowed over relatives of Israeli citizens?” parliamentarian Merav Michaeli, a member of the opposition Labor party, tweeted.

Aryeh Deri, from the Orthodox Shas party, defended the move.

“A mother does not tell her children that she doesn’t have the strength to host them,” Deri told Channel 12, an Israeli news channel.

Orthodox gap year programs in Israel are a rite of passage for thousands of diaspora high school graduates, who want to immerse themselves in Jewish studies, holy sites and Israeli hummus. 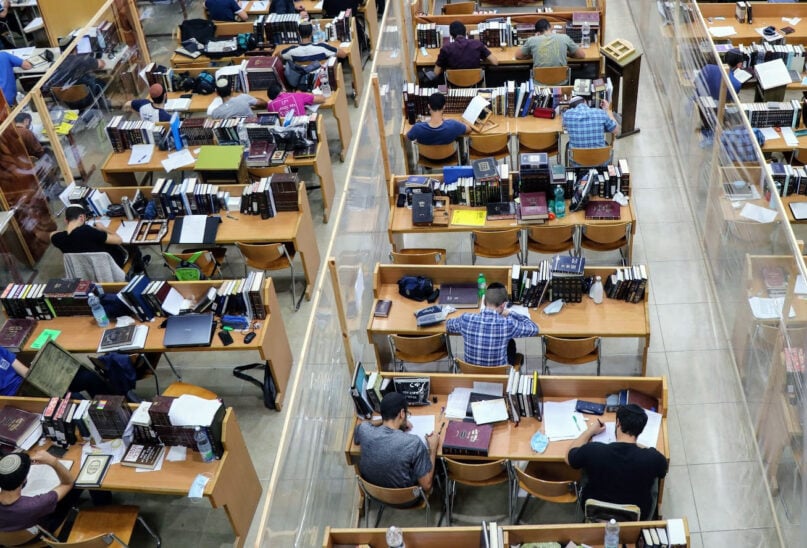 Seminary and yeshiva students who study in Israel “experience a lot of religious and emotional growth that can’t be replicated anywhere else,” said Suzanne Cohen, director of Israel guidance at the Ma’ayanot Yeshiva High School for Girls in Teaneck, New Jersey.

Cohen, whose own daughter will be spending the year at an Israel seminary, said she trusts that Israel and the gap year programs will do everything in their power to keep the students safe.

Dov Lipman, a former Knesset member who pushed for the students’ entry, said both Israel and the students benefit from the experience.

Gap year and other youth programs annually contribute $200 million to the Israeli economy, and the students return home “strengthened in their religious faith and supportive of Israel,” Lipman said.

Rabbi Shalom Rosner, a leading rabbi at the Kerem B’Yavneh yeshiva south of Tel Aviv, said 83 overseas students there will need to remain in quarantine for 14 days, in groups of six, as soon as they arrive in Israel.

While the overseas students would ordinarily mix with the yeshiva’s Israeli students, that likely won’t happen, at least for a while.

“That’s a pity because both thrive on getting to know each other,” he said.

Dina Blank, executive director of Machon Ma’ayan, a seminary for Orthodox young women from the diaspora in central Israel, said leaders of gap year programs have been working hard on COVID-19 precautions.

“To the parents, I’d say: Everyone in the industry is dedicated and determined to take care of their children. We take the responsibility very seriously,” Blank said.

All of Machon Ma’ayan’s students will arrive on Sept. 2 and quarantine in groups of six, with each “pod” having its own shower and bathroom. Meals will be delivered to and laundry collected outside their door.

The seminary’s staff already has experience teaching during the pandemic. In March, 17 of the of the seminary’s 50 students decided to stay in Israel — under lockdown. The rest returned to their home countries.

“Running in the midst of COVID had its challenges,” Blank said. “But it also afforded us a great opportunity to learn how to keep students quarantined and social distancing while continuing to learn and grow.”

Last June, when the government lifted restrictions, the seminary managed to take its students on an overnight hike and brought them to a farm, where they picked produce for struggling farmers.

Given the uncertainty caused by the virus, some prospective students took the difficult decision to stay home this year.

“I realized that if I came to Israel now I probably wouldn’t be able to experience 90% of the things I was looking forward to doing and seeing,” said an 18-year-old American who requested anonymity because he is the only one of his friends to cancel his trip. “I know I’ll be coming in a year or two, maybe on a semester abroad at an Israeli university.”

Avi Weinreb, a yeshiva student who flew back to Los Angeles just before Israel sealed its borders in March due to COVID-19, will be spending the coming year – his third – in Israel.

He plans to return this fall to serve as a counselor to first-year students at the Aish HaTorah yeshiva in Jerusalem. Weinreb hopes the time he spends in Israel this year will make up for what he missed out on during the pandemic.

“I feel like last year was cut short, and I feel like I still need to experience some growth and guidance in my life. I know I’ll get this in yeshiva. I love being in Israel and probably see myself having a future there.”