(RNS) — On the morning of July 31, Samuel Chu, a Hong Kong pro-democracy activist and community organizer, woke to discover the Hong Kong police had issued a warrant for his arrest on charges of “inciting secession” and “colluding with foreign powers.”

Instead of a loud knock on the door, however, news of the warrant arrived in a hail of texts, emails and social media messages that Chu, 42, a naturalized American citizen, fielded from his apartment in Los Angeles’ Echo Park.

With Beijing’s clampdown even on foreign supporters of Hong Kong’s freedoms, Chu said the warrant was just the latest step in China’s increasingly tighter control over the former British colony, which had enjoyed special freedoms after being returned to China two decades ago.

“We all saw the national security law,” said Chu, referring to Provision 38, which was issued in June by China and claims extraterritorial jurisdiction. It was after that issuance that Chu become a target of the authorities and his name was included on a shortlist of six dissidents living abroad who were wanted for arrest.

“Basically anybody, anywhere in the world, regardless if you are a resident of Hong Kong or not, you are subject to every provision of the law,” said Chu. “I think that that was preposterous. But I’m not surprised.”

The warrant for Chu’s arrest caught the attention of American officials — some of whom he’d met during his work as an activist — concerned about Chinese imposition of authoritarian rule in Hong Kong. 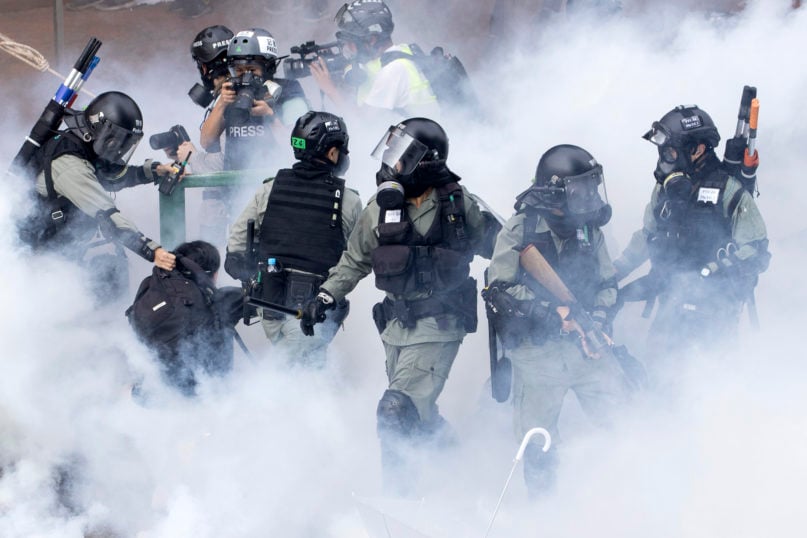 Police in riot gear move through a cloud of smoke as they detain a protester at the Hong Kong Polytechnic University in Hong Kong on Nov. 18, 2019. (AP Photo/Ng Han Guan)

Secretary of State Mike Pompeo joined leading Republican and Democratic members of Congress in offering support for Chu and the other dissidents.

“The United States and other free nations will continue to protect our peoples from the long arm of Beijing’s authoritarianism,” Pompeo said.

“This is the long arm of China in action & the free world should not stand for it,” wrote Sen. Marco Rubio on Twitter.

Chu can’t remember a time when he hasn’t been part of the struggle against China’s growing influence over Hong Kong. 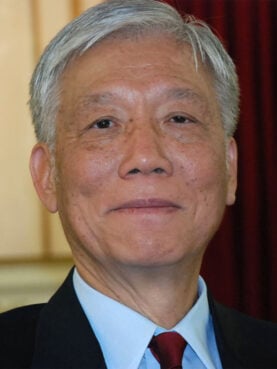 “What we have lived through as a family, the kind of politically motivated prosecution that my dad went through last year,” Chu said. His father, the Rev. Chu Yiu-ming, a former Hong Kong pastor and co-founder of Occupy Central, a civil disobedience campaign demanding the people elect Hong Kong’s officials, was arrested in April 2019 for championing democracy in Hong Kong. He was later released, while two of his fellow organizers remain in jail.

Before Chu Yiu-ming was convicted by a Hong Kong court last year of “conspiracy to commit public nuisance” for his role in the Occupy Central and Umbrella Movement protests, he delivered a sermon of sorts in his defense.

“Political freedom is more than loyalty to the state. It professes human dignity,” he said from the defendant’s dock. “Every single person living in a community possesses unique potentials and powers, capable of making a contribution to society. Human right is a God-given gift, never to be arbitrarily taken away by any political regime.”

Samuel Chu remembers joining his father on the streets of Hong Kong during the early days of the Occupy Central movement in fall 2014, navigating a critical flashpoint that led to the escalation of one civil disobedience campaign into a mass movement.

RELATED: Christians lend an anthem, and a pacifist spirit, to protests in Hong Kong

The turning point, Chu recalled, came in late September after boycotting students stormed the central government offices and police moved in to surround them. On Sept. 28, 2014, Chu Yiu-ming and other Occupy Central leaders arrived to show their support, and police then barricaded them along with the student demonstrators.

Chu and 3,000 Hong Kongers upped the ante, assembling directly across the street to stand in solidarity as police began to deploy tear gas against a growing number of demonstrators who were outraged by the government’s treatment of the students.

“I was shocked by how disciplined the group was,” Samuel Chu said. “Here we were, 3,000 people who had never met each other. We were literally having a debate on the sidewalk about how we would advance ourselves, peacefully but firmly, across the traffic to the group that was being surrounded.

“About 2 o’clock in the afternoon, I began to see that this was going to explode,” Chu continued. “The umbrellas came out, the masks came out, the goggles came out. And the police began to put their helmets on. That’s when I realized that this peaceful protest was going to be a test of, ‘Can we have a massive civil disobedience act in a city that had never experienced this?’”

Last September, Samuel Chu launched his own initiative, the Hong Kong Democracy Council, to educate American leadership about the pro-democracy struggle in Hong Kong, building on his experience from two decades of community organizing around social justice issues in the U.S. Before COVID-19, he spent his time traveling between Los Angeles and Washington, D.C., for the organization. And this month, after Hong Kong police arrested newspaper publisher Jimmy Lai and activist politician Agnes Chow, Chu helped launch #WeAreAllHongKong, a campaign to warn China’s critics worldwide that they may be next.

“I think a lot of this tactic of the Communist Party and the regime in Beijing is to say that if we can just target and cut off the head of the snake that we can stop the opposition,” Chu said. “In this case, they picked the wrong person and the wrong organization. What they don’t understand is we’re organized in a radically democratic way.”

“HKDC is not Samuel Chu. It is me trying to develop 100, 200, 1,000 others just as effective, as committed and as well-versed on Hong Kong and U.S. politics,” he said. “So they can target me, but they’re only going to help us cultivate hundreds and thousands of others.”

Chu found his calling in organizing different student religious groups while an undergraduate at UC-San Diego. He then went on to complete a master of divinity at Fuller Theological Seminary in 2003.

But he says his most pertinent education came when he found Immanuel Presbyterian Church in the Koreatown district of Los Angeles and met Ernesto Cortes, a community organizer who schooled him in the methods of 20th century progressive activist Saul Alinsky, who wrote “Rules for Radicals: A Pragmatic Primer.” 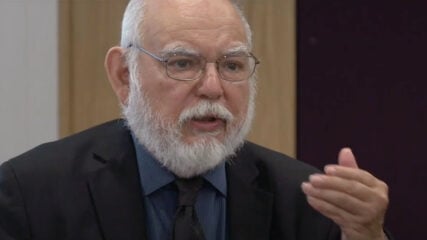 Cortes now runs the national community organizing institution Alinsky co-founded, Industrial Areas Foundation. Immanuel was one of the churches on the list of recruitment for the IAF, which is what attracted Chu to the church. “I actually went there because of the organizing that I wanted to do more than because it was a Presbyterian church,” he said.

IAF calls itself “the nation’s largest and longest-standing network of local faith and community-based organizations.” Cortes is a MacArthur “Genius Grant” recipient and focuses on the connections between faith and grassroots power.

Cortes pioneered a model of identifying and nurturing lay leaders within religious congregations to lead social change, helping to reshape IAF’s work after Alinsky’s death. That’s the model Chu has employed through much of his career.

Working with IAF, Chu and the Immanuel congregation joined a movement against overcrowding in Los Angeles’ public school system, keeping pressure on the district to break ground on 131 new schools with $27 billion in bond funding between 1997 and 2007.

This included pushing for an ambitious education complex to be built near the church, on the site of what was once the Ambassador Hotel, where Robert F. Kennedy was assassinated.

The hotel closed in 1989. It became the target of an unsuccessful development proposal from Donald Trump in the ’90s and ultimately sat vacant for nearly two decades before it was demolished to make way for the complex. The nearly $600 million project opened one block from Immanuel in 2010, with capacity for 4,200 students. In this Aug. 10, 2010, photo, the Robert F. Kennedy Learning Center is seen in Los Angeles. The Robert F. Kennedy Community Schools are located at the former Ambassador Hotel, where the Democratic presidential contender was assassinated in 1968. (AP Photo/Damian Dovarganes)

Recognizing that Los Angeles’ vast and fragmented metropolis could stand in the way of their organizing goals, Chu joined forces with Cortes and other organizers to create One LA, an ambitious effort to unite Angelenos across faith and geography.

At a launch event that welcomed a crowd of more than 10,000 at the Los Angeles Convention Center in 2004, Cortes said: “We have a lot of institutions whose fundamental role is to teach us what psychologists call ‘learned helplessness.’ They teach incompetence. They teach a lack of capacity.”

Chu planned the event and began to find his voice as he addressed the crowd.

“We have heard our stories that have given us our agenda,” he said, standing shoulder to shoulder with fellow organizers behind a banner that read “Standing for Families” in English, Spanish and Korean. “Now we have to take the responsibility to make it happen.”

His organizing activity came straight out of his father’s playbook. “One of the first things that led my dad into public political work in Hong Kong was the lack of access to health care at the church community that he started in in the ’70s,” Chu said. “It took them seven years to lead to the building of the largest and most advanced public hospital today, just a few blocks walking distance from the church.”

While a sense of religious purpose has run through Chu’s life and career, he left both Immanuel and the larger church completely in 2009 after serving as Immanuel’s director of relational ministries for seven years. 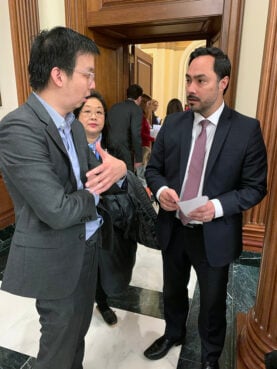 “I didn’t have a blow-up, but I think that it was part of my own revolution and evolution. Even from the very beginning, I felt the tension between church and religion as a theoretical exercise,” Chu reflected. “I’ve always understood church as being a social, cultural, economic and political institution. And the role and the impact that we play isn’t spiritual exclusively.”

He has continued to lead One LA, which became part of IAF, even as he began working as a national organizer for a Jewish anti-hunger nonprofit called Mazon in 2011.

“My career has been a little bit of a windy road, but I think there’s some very clear logic to the windiness and the chaos,” he said. “I would say the one thing that runs through clearly is I have a deep and abiding belief that people should have the opportunity to exercise their own agency and power for what matters most to them. The greatest contribution to inequality and injustice is the inability for people to exercise their political rights.”

Since he was targeted for arrest by the Chinese government, Chu has been making as much noise as possible, warning the world that what happens to him can happen to all.

“I won’t be the only person sought by China for punishment of some sort,” Chu wrote in a New York Times op-ed this month. “And if I can be targeted, any citizen of any nation who speaks out for Hong Kong can be, too.”

“What they’re trying isn’t going to work because I’m not going to change what I’m doing.”

This story is produced with support from the University of Southern California’s Center for Religion and Civic Culture as part of the Spiritual Exemplars Project. 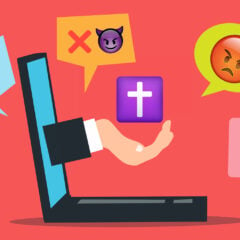 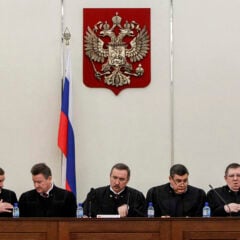