(RNS) — Last week at the Democratic National Convention, the Biden-Harris campaign made pointed efforts to reach out to a broad range of “voters of faith.”

The convention featured Roman Catholics, Jews, Muslims, Sikhs and Hindus and mainline, evangelical and charismatic Protestants. The Biden campaign’s “big tent” faith message was clear: For people of every religious persuasion, Democrats are the only party equipped to address the critical crises of racial injustice and a global pandemic that our country faces.

In this ecumenical display, Democrats followed past presidential candidates of both parties, who have relied on faith leaders to assert their spiritual fitness for the office.

On Thursday (Aug. 27), the Republican National Convention will feature a prayer from the Rev. Franklin Graham. It is not surprising that President Donald Trump’s campaign decided to give airtime to Graham, given the president’s much-reported appeal to white evangelical voters. Graham, a white evangelical leader from a legendary family and Trump devotee, will no doubt continue to praise the president as God’s man for the nation.

What is surprising, however, is that the RNC’s program features none of the Pentecostal-charismatic celebrities who connect him to their energized, multiethnic segment of the so-called evangelical vote.

Arguably Trump’s most ardent supporters, Pentecostal-charismatic faith-based media moguls have enjoyed unprecedented access to the White House during Trump’s tenure. In return, they have showered the president with praise and loyalty.

Trump’s penchant for rewarding those who heap praise upon his presidency makes their absences noteworthy (although they could be featured as “nightly surprise” guests). 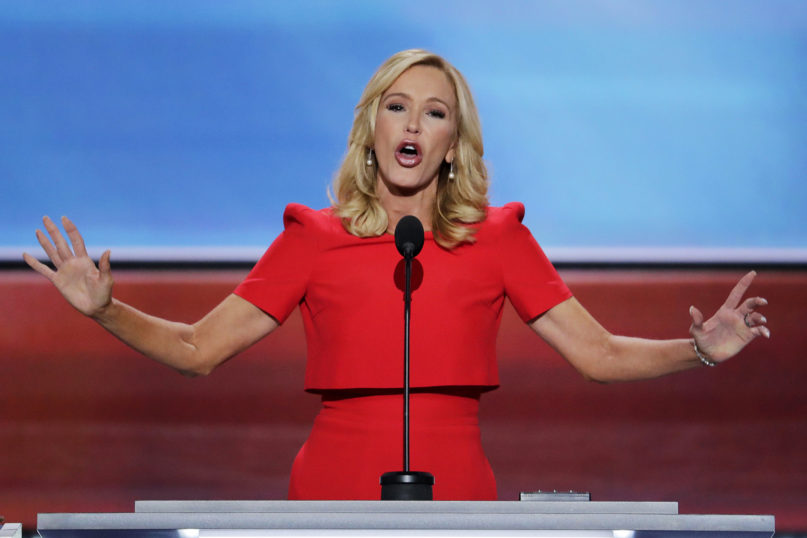 Pastor Paula White-Cain delivers the benediction at the close of the opening day of the 2016 Republican National Convention in Cleveland on July 18, 2016. (AP Photo/J. Scott Applewhite)

But whether they appear on stage or not, Pentecostal-charismatics stand to play as important a role in this coming election as they did in the last, when the Trump campaign savvily targeted this demographic for their electoral potential.

Not everyone considers Pentecostals and charismatics to be evangelicals, but they are evangelicals to this president. When Trump created an “evangelical advisory board” in 2016, he included many of the usual suspects in white evangelical political activism.

But he also stretched conventional boundaries of the term “evangelical” by including Pentecostals and charismatic televangelists like Tony Suarez, Rodney Howard-Browne and Paula White-Cain in his group.

What is now a network of charismatic evangelical Trump supporters began with a friendship between Trump and White-Cain, a flamboyant prosperity preacher from the president’s second home state of Florida.

White-Cain stumped for Trump on television and connected him to other high-profile Pentecostals and charismatics in 2016. The Trump campaign skillfully mapped stops at megachurch congregations like Darrell and Belinda Scott’s New Spirit Revival Center in Cleveland and the International Church of Las Vegas, where candidate Trump received divine anointing and prophetic blessings. 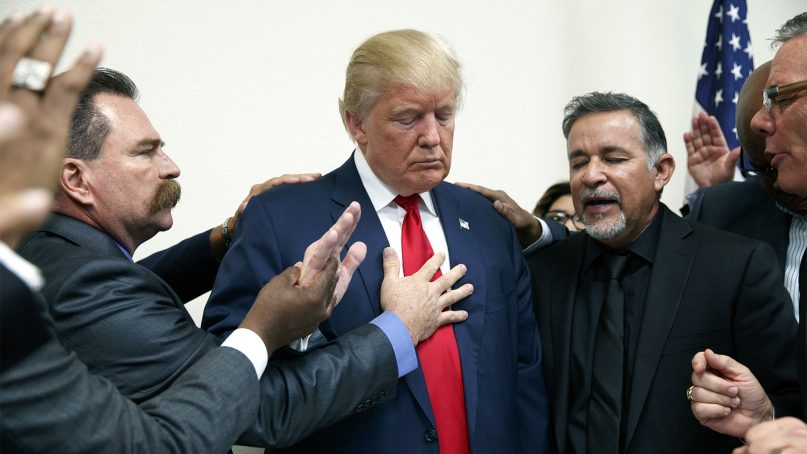 Pastors from the Las Vegas area pray with then-Republican presidential candidate Donald Trump during a visit to the International Church of Las Vegas, and International Christian Academy, on Oct. 5, 2016, in Las Vegas. (AP Photo/ Evan Vucci)

While Trump appeared uncomfortable receiving such blessings, he was still receptive to the prayers that described his bid for office as divinely ordained.

While in office, Trump has continued to receive anointing prayers that have invoked him as a ruler akin to Israel’s King David and Queen Esther —  biblical monarchs with a divine purpose.

Trump has steadfastly nurtured this intimacy during his first term. He’s made moves that appeal to charismatics’ long-standing priorities and tastes, including support for Israel, prosperity, spiritualized authoritarianism and plain-spoken populism.

White-Cain was given the honor of praying at the president’s inauguration, and Trump has welcomed a bevy of Pentecostal and charismatic leaders to Washington. They’ve visited his White House and prayed in the National Cathedral.

Last year, Trump made White-Cain his national “Faith and Opportunity Initiative” adviser, a clear sign of his continued faith in this base.

Last winter, Kari Jobe, a charismatic worship leader and co-author of the global megahit “The Blessing,” visited the capital, prayed for the president and marveled at “what God is doing in our White House.”

A person like Jobe may seem inconsequential to traditional political operatives, but her music is sung in evangelical circles all over the world. 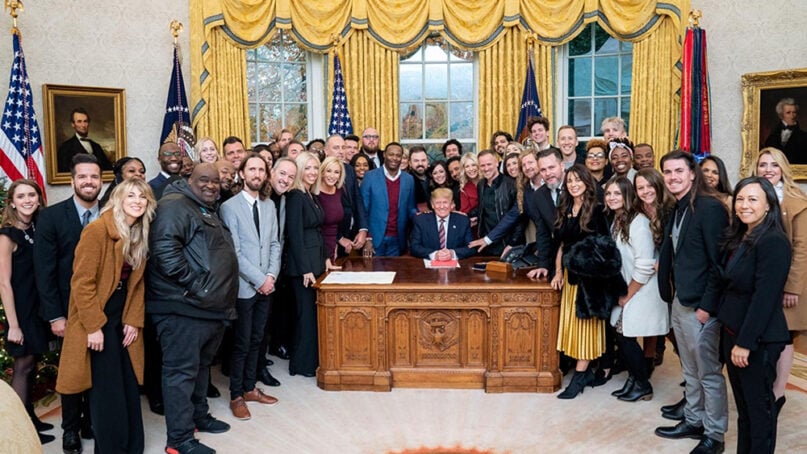 Evangelical worship leaders from across the country surround President Donald Trump for a photo in the Oval Office on Dec. 6, 2019. (Official White House Photo by Tia Dufour)

It may seem like a mistake to focus this narrowly on a segment of the American religious landscape, but it’s an approach that could have a major electoral payoff. Though white evangelicalism is on the decline, Pentecostal-charismatic evangelicals are multiethnic, transcend evangelical/mainline or Protestant/Catholic divides and are a consistent influence at the polls. Charismatic believers often cluster into large megachurches — outside of historic denominations, and therefore beyond the reach of traditional methods of campaign “faith engagement.”

Trump’s past campaign-stop circuit and media appearances appear tailor-made to the culture of this demographic.

If his Pentecostal-charismatic celebrity spokespeople feel slighted by their absence on the convention program, they are not showing it. Suarez, White-Cain and Darrell Scott continue to support Trump on their considerable social media platforms. Pentecostal-charismatic media coverage faithfully maintains that Trump is a strong leader whom God is using for good.

Trump’s courting of celebrity Pentecostal-charismatic “court evangelicals” on their own terms may make a big difference in 2020.

Democrats and Republicans of the future will need to take note.

Religion Hub
Supreme Court to hear case of praying ex-football coach
Follow us on Facebook!
Submit your photos to RNS