(RNS) — Like millions of other Americans, I have waited eagerly the past few months for life to return to normalcy. Sports have been my refuge since childhood, and watching the NBA Playoffs has become a family tradition (and obsession) for the past several decades.

I’m not sure what it says about me that sports are such a centerpiece of my life. I also don’t know how to fully express how and why they bring me so much joy.

What I can say, though, is that playing and watching sports make up some of my fondest memories and life experiences — and having them back in action after such a difficult summer felt comforting.

For many, including myself, we welcomed the return of professional sports as a balm for our current struggles.

At the same time, I was one of the many who struggled with the efforts to bring sports back online in the midst of the pandemic. Is it ethical to risk the health of our professional athletes for our own entertainment?

Wouldn’t we be better off putting our money and resources to supporting the millions of people impacted by COVID-19?

These are questions of cultural priorities, and I was never quite comfortable with where we landed.

And yet, when the NBA and other sports leagues resumed their seasons, I was there with all the other basketball aficionados, rooting for my team (the San Antonio Spurs) and enjoying all the tight games and storylines. The NBA’s diligence and thoughtful planning paid off. For the first time in about six months, life had a taste of normalcy to it.

Then, a video came out of police officers in Kenosha, Wisconsin, shooting Jacob Blake seven times in the back. Yet another instance of police brutality against an innocent Black man, following a summer of protests and marches against this very thing.

As with recent incidents of police brutality against Black people, including the murders of George Floyd and Breonna Taylor, the unjustified shooting of Jacob Blake captured the attention of the entire nation — including professional basketball players. 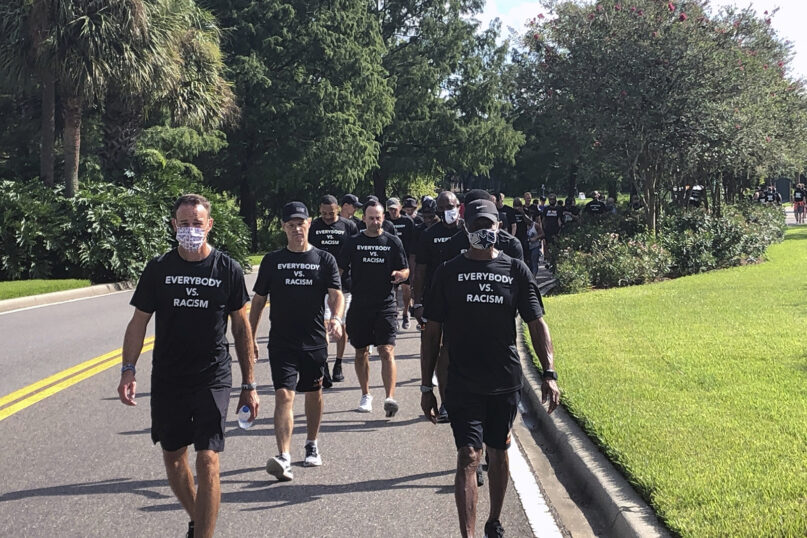 Many NBA players had used their platforms over the summer to bring attention to racial injustice, from posts online to their millions of followers to donating millions of dollars for organizing marches to proclaim that Black Lives Matter.

So it came as no surprise when, in the wake of Jacob Blake’s murder, the players spoke up.

What came as a surprise to me, though, was when the Milwaukee Bucks initiated a strike in response to the murder. This was an unprecedented move and one that felt initially hard to square. Never before had an NBA team forfeited a playoff game as part of a strike.

In addition to being unprecedented, the stakes were so high. The Milwaukee Bucks had been the best team in basketball this year. They had the league’s Most Valuable Player and Defensive Player of the Year in Giannis Antetokounmpo. There were hundreds of millions of dollars on the table.

Still, the players refused to play, and instead, used their platforms to seek justice in the wake of horrific racism.

The first thing I remember thinking was: “What a powerful reminder that there’s more to life than sports.”

Sometimes, seeing other people behave in accordance with their values and priorities helps us reflect on our own. This is what we mean when we talk about modeling integrity.

I was with my NBA-loving family when we first heard the news, and we all buzzed around with excitement. We talked the rest of the evening about how moving it was to witness people make real sacrifices. We also expressed our annoyance with the crowds of people already complaining that professional athletes should just “shut up and dribble.”

Just as our family began to discuss these inane complaints, we started to see the dominos fall. WNBA players, who had been leading for years on issues of social justice, went on strike as well. The other NBA playoff games for the evening were postponed. Then the NBA teams and league officials would be meeting to discuss potentially canceling the season.

Professional sports leagues and athletes across the country, including Major League Baseball, which has been traditionally conservative, followed their lead and organized strikes for the cause of racial justice. This was not just a moment. It was a movement. And it’s all connected to Colin Kaepernick’s public commitment to kneel during the national anthem as a statement against police brutality.

When we live through our daily lives, it can be hard to appreciate the historic gravity of movements like these. But when we take a minute to zoom out and get a bit of perspective, the opposite becomes true — it’s hard to ignore the magnitude of what we’re witnessing.

The most deadly pandemic of our generation was unable to derail the NBA season — but racism and police brutality are strong enough forces to do so.

How’s that for a reminder of personal and cultural priorities?

News Analysis
Our best religion stories from a terrible year
Opinion
‘We out’: Charlie Dates on why his church is leaving the SBC over rejection of critical race theory
Opinion
Peacemaking is the essential work of our time
Opinion
Cleveland club restores our faith that we — and baseball — have the power to change
News
NBA players hailed by pope at Vatican for demanding justice