(RNS) — Jacob Wells has been inundated with hundreds of emails and phone calls since Friday evening.

“Some of the language has been very colorful,” he said.

Wells is the co-founder of GiveSendGo, a Christian crowdfunding site that is currently hosting a campaign to raise money for the legal defense of Kyle Rittenhouse, who has been charged with two homicides and one attempted homicide in Kenosha, Wisconsin.

According to published reports, Rittenhouse had traveled from his hometown of Antioch, Illinois, about 20 miles from Kenosha, to join a group of armed civilians who reportedly gathered on August 25 to protect a car dealership amid a series of protests demanding justice for the shooting of a Black man, Jacob Blake, by Kenosha police days earlier. Protesters walk past police with their arms up, late Monday, Aug. 24, 2020, in Kenosha, Wisconsin, as a building burns in the background. Protests erupted following the police shooting of Jacob Blake. (AP Photo/David Goldman)

The seventeen-year-old Rittenhouse has been identified in videos with the group and can be seen talking with police and holding an AR-15-style rifle. He was interviewed by a reporter for the Daily Caller, telling the reporter that people “were getting injured and our job is to protect this business.”

Later that night, after leaving the dealership, videos posted on social media appear to show Rittenhouse being pursued by protesters. A shot is fired by someone in the crowd, and a person identified as Rittenhouse then turns toward the shot and fires multiple times, appearing to shoot a man in the head.

He then flees and is pursued by several protesters. One lunges at him with a skateboard and another is holding a handgun. Rittenhouse fires again, hitting the man with the skateboard in the stomach and hitting the man holding the handgun in the arm.

The altercation left two of the protesters dead and a third injured. Rittenhouse was arrested the following day.

The campaign to support Rittenhouse has proved controversial. Defenders of Rittenhouse, including the GiveSendGo campaign, believe he was acting in self-defense.

President Trump weighed in during his briefing on Monday, saying Rittenhouse “was trying to get away from them. It looks like he fell and then they very violently attacked him … He probably would have been killed.”

Wells told Religion News Service in an interview on Monday that he has heard from both sides in the debate over Rittenhouse’s actions. He has had many people reach out and express gratitude for allowing the campaign and for “not being bound to cancel culture.”

He’s also received significant pushback for the decision to host the campaign, while other crowdfunding sites like GoFundMe and Fundly have removed any campaigns for Rittenhouse.

Wells said the organization can’t judge Rittenhouse’s motives: “We said, listen, we’re not the judge and the jury, God is. And we’re going to leave it up to him in that.” 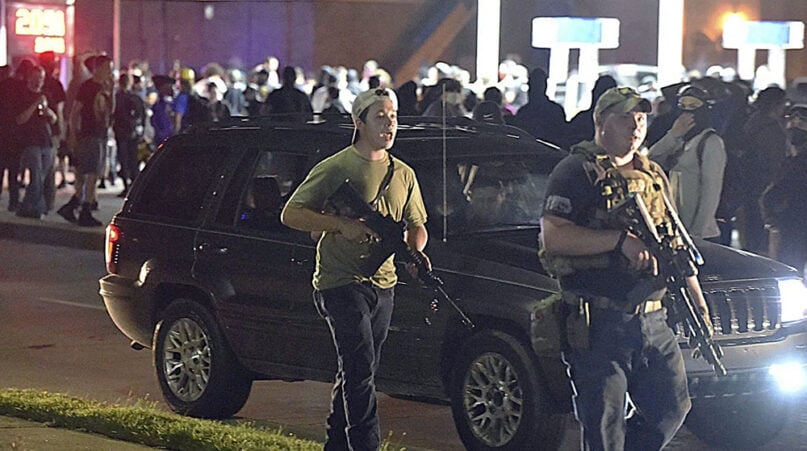 “In making that decision, it opened us up to a whole lot of attacks,” he said. “From a cyber perspective, we had people attacking our platforms to try to take it down.”

Wells said GiveSendGo did not seek out the campaign but did verify it and made the decision to allow it on the site. He said there are campaigns that they would say no to, but it’s a discretionary decision on a case-by-case basis.

They have never taken down a campaign thus far, according to Wells, though they have asked people to change the language in their campaigns on occasion, usually if they were “specifically attacking someone else.”

He said that GiveSendGo does not limit campaigns to those with a Christian message or one they agree with.

Even so, Wells insisted that “as a platform, everything we do and what our platform delivers is Christ-centered.”

That’s primarily what bothers Rev. Nathan Empsall, campaigns director for Faithful America. He criticized the Christian group for hosting the campaign for Rittenhouse, whose actions, he said, run counter to Christian values.

“Jesus explicitly says blessed are the peacemakers,” said Empsall. “Crossing state lines to take up arms against Black Lives Matter is not making peace. And it’s certainly not siding with the oppressed or the marginalized.”

Faithful America has created a petition calling on GiveSendGo to take down the Rittenhouse campaign. A small group of Black Lives Matter protesters pray near the site of a police shooting, Monday, Aug. 24, 2020, in Kenosha, Wisconsin. Kenosha police shot Jacob Blake Sunday evening, setting off unrest in the city after a video appeared to show the officer firing seven shots at close range into Blake’s back. (AP Photo/Morry Gash)

As of Monday evening, more than 12,000 people have signed the petition. Organized Saturday, the petition is directed at Wells and his GiveSendGo co-founder, Heather Wilson.

“As fellow Christians, we call on you to follow GoFundMe and Fundly’s example of moral leadership, and delete all GiveSendGo fundraisers for Kyle Rittenhouse immediately,” the petition reads.

“This is very much about saying ‘No, stop dragging Jesus’ name through the mud,'” said Empsall. “Faithful America’s grassroots members are sick of our faith being misrepresented. It’s time to speak up for racial justice, not for guns and violence. Beat those AR-15s into plowshares.”

The petition also described Rittenhouse as a “white supremacist.” But after being asked about the use of that label by RNS, Empsall said he regretted it and planned to change it.

“Kyle Rittenhouse may not be a racist or white supremacist in his heart,” Empsall said. “And if we implied that with our initial language, you know, I regret that and we’ll change it.”

The petition, which was edited after the interview, now reads: “that further the cause (intentionally or not) of white-supremacy.”

RELATED: In the Fatiha, Jacob Blake’s father cried for justice and healing for his son

In response to the Faithful America petition, Wells said, “There’s always going to be people that disagree with anything. I mean, that’s the state of the world that we live in.”

Wells said GiveSendGo is committed to applying grace to all situations, including their own.

“We may not get everything right with what campaigns that we decide to allow on our platform,” he said. “And we most likely won’t, if you’re around long enough, any human they’re going to make mistakes and we don’t exempt ourselves from that.”

He said that grace extends to Rittenhouse as well.

“Everyone has already judged him without allowing the court system to actually judge him based upon evidence,” he said. “It’s fascinating to me that we, as a society, have come to a place where everybody is the judge and jury.”