(RNS) — Evangelicals have seen this before. A celebrity leader caught in a scandal that seems to grow more bizarre by the minute.

For Jerry Falwell Jr., what started with a racy Instagram photo of him next to a young female assistant, pants unzipped, drink in hand, has exploded into allegations of an affair, voyeurism, sex with a Liberty University student and financial impropriety involving both Falwell and his wife, Becki.

Strange as Jerry Falwell Jr.’s fall from grace may be, it is not the first time the Falwell family has been involved in a story like this.

In March 1987, Jim Bakker resigned as president of PTL and its television network when his sexual encounter with Jessica Hahn in a Florida hotel room became public. In the months that followed, the allegations against Bakker grew to include financial fraud and a string of gay relationships, some with employees who depended on Bakker for their jobs.

The revelations eventually led to his indictment and trial in federal court.

Jerry Falwell Sr., who took over PTL after Jim Bakker’s troubles became public, was largely responsible for exposing Bakker and sealing his fate.

The parallels between Jim Bakker and Jerry Falwell Jr. are striking. Both were innovators who pushed their organizations to dramatic heights. Bakker started the PTL television network with half a dozen employees in a former furniture store in 1974.

In 1978 PTL launched the first private satellite network, a year before ESPN. The satellite network beamed Christian programming into millions of homes 24 hours a day, making Jim and Tammy stars and opening up enormous fundraising potential. By 1986, PTL had revenues of $129 million a year. Bakker used the television resources to build a 2,300-acre theme park, Heritage USA, which had six million visitors at its peak in 1986, behind only Disneyland and Disney World. But Heritage USA cost more than even the television money could support, leading Bakker to commit the fraud that sent him to prison. 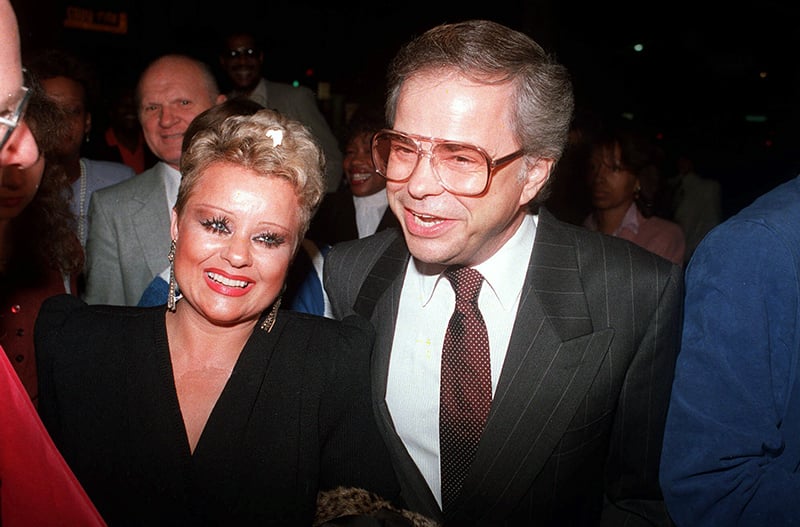 Jim and Tammy Faye Bakker enjoy a night on the town on Oct. 24, 1987 as they arrive at the Beverly Theatre to see the show “The Gospel Truth.” (AP Photo/Douglas C. Pizac)

Coinciding with his rise to fame, Bakker embraced the prosperity gospel, a message that fit the 1980s perfectly. Jim and Tammy practiced what they preached, using PTL money to buy a 10,000-square-foot home near Charlotte, a Florida beach condo, and vacation homes in Palm Springs and Gatlinburg, Tennessee. They traveled with an entourage, flying first class or in chartered jets, and bought expensive cars, boats, clothes and jewelry. From 1984 to 1987 the Bakkers’ total compensation was $4.7 million.

Jerry Falwell Jr. has similarly transformed Liberty University, launched by his father in 1971.

After he took over leadership of the school in 2007, following the death of his father, Liberty’s endowment soared from $6.3 million to $1.6 billion, according to The Washington Post.

Falwell Jr. was an early and vigorous proponent of online education. Last May, Liberty announced that its online enrollment had surpassed 100,000 students.

As was the case with PTL, there are questions about Liberty’s financial integrity. Liberty’s undergraduate graduation rate is only 40% after eight years, according to Forbes. Many of these students leave with substantial debt, the result of student loans raked in by the school. The median debt for students graduating from one of Liberty’s “theological doctoral programs,” according to Forbes, was $96,000. Doctorates in theology rarely lead to big money.

Meanwhile, the Falwells have enjoyed the perks of success.

The infamous Instagram photo was taken on a 164-foot yacht owned by NASCAR mogul Rick Hendrick. The Falwells began vacationing on the yacht after Liberty University agreed to pay Hendrick Motorsports a reported $6 million a year to sponsor a car in NASCAR’s premier Cup series, according to Politico.

RELATED: The fall of Falwell: A timeline of the ups, downs and scandals of his Liberty University presidency

When the Jessica Hahn story broke, Bakker turned to Jerry Falwell Sr., whose influence had soared after he founded the Moral Majority in 1979, to preserve his empire. As Bakker remembered it, he invited Falwell to take over the leadership of PTL for six months while he rehabilitated his image.

Over the next several months, Falwell and his team discovered that PTL was $65 million in debt and losing $2 million a month. They also uncovered stories about gay relationships and visits to prostitutes, sins that were insurmountable among evangelicals in the 1980s. Rather than save PTL, Falwell pushed it into bankruptcy. Standing in front of reporters on October 8, 1987, Falwell declared that Bakker had turned it into a “scab and cancer on the face of Christianity.”

Jerry Falwell Jr., right, answers a student’s question, along with his wife, Becki, at a convocation at Liberty University in Lynchburg, Virginia, on Nov. 28, 2018. (AP Photo/Steve Helber)

Like Bakker, Jerry Falwell Jr. now finds himself mired in scandal. Following the Instagram photo, a former pool attendant, Giancarlo Granda, told numerous news outlets that he had a years-long affair with Becki Falwell and that Jerry “enjoyed watching” him have sex with his wife. After that, a former Liberty University student told Politico that Becki Falwell had performed oral sex on him when he stayed at their home following band practice in 2008.

The former students described her as “the aggressor” in the relationship, according to Politico.

There is likely more to come.

American evangelicals expect their leaders to be both pious and successful, with success measured in terms of celebrity, money and political influence. For Jerry and Becki Falwell, much like Jim and Tammy Bakker, success has been easier to maintain than piety.

According to NPR, after stepping down as president of Liberty University, Falwell appropriated the words of Martin Luther King Jr., declaring himself “free at last, free at last.”

It is easy to see why.

Falwell claims that he will leave Liberty University with $10.5 million in compensation.

Still, he and his wife leave with tarnished reputations.

Is there a road back for Jerry and Becki Falwell?

The second acts of Jim and Tammy Bakker suggest that there is. Irrepressible and unfiltered, with big hair and outrageous lashes, Tammy’s focus was never solely on the church, so it was easier for her to branch out. While she never lost her faith, after the collapse of PTL and her divorce from Jim, she ventured beyond the borders of evangelicalism, becoming an icon of the gay community, the Judy Garland of televangelism.

After prison, Jim initially rejected the prosperity gospel that had been so much a part of his success and downfall at PTL. But it was not long before he returned to his roots. He and his second wife, Lori Bakker, have built a new ministry called Morningside on 700 acres near Branson, Missouri. There Bakker has exchanged the prosperity gospel for doomsday apocalypticism, finding a way to turn a profit by selling freeze-dried survival food and gear to preppers. He has also turned to conservative politics, aligning with Donald Trump. It is brilliant, in a way, connecting to current trends and a new base of support.

Whichever path the Falwells choose, they will not be the last of their kind.

Much of American evangelicalism’s success rests on its close connection to American popular culture. But appropriating cultural expectations is risky business. Lines blur and compromises are ignored until scandal erupts.

(John Wigger is the author of “PTL: The Rise and Fall of Jim and Tammy Faye Bakker’s Evangelical Empire” and professor of history at the University of Missouri. The views in this commentary do not necessarily reflect those of Religion News Service.)