(RNS) — Over the past two seasons, Liverpool Football Club has been to the mountaintop of European football. In 2019, “the Reds,” as my beloved soccer team is known, raised the coveted Champions League trophy; in July, the team finally bagged a long-elusive English Premier League title.

For Liverpool aficionados like me, this should be a moment of unqualified bliss. But as a Muslim I’ve felt my airtight allegiance teetering ever since Liverpool announced a deal to make Nike its official gear supplier and thus conspicuously align its brand with a company whose global supply chain runs through the Uighur homeland of Xinjiang, China. The familiar swoosh trademark that adorns all of Liverpool players’ attire is an unsubtle reminder of Nike’s complicity in the exploitation of the region’s persecuted Muslim minority. Though I’ve joined a growing chorus of voices rightfully calling for a boycott of Nike, the swoosh has also compelled me to reevaluate what Liverpool fandom truly represents.

For any English soccer fans who pay attention to matters off the pitch, the history here is bleak: In recent years, the Uighur Muslims — considered a threat as believers in an atheist society — have refused to disavow their faith and way of life to satisfy Beijing. As a consequence, they have undergone an “assimilation” program that has become a pretext for genocide. Through a systematic policy of imprisonment and surveillance, the goal has been to excise the heart of Uighur identity: Islam.

As global furor has pushed China to shutter some of its camps in Xinjiang, the Uighurs have been transferred to factories and service jobs many miles from home. A conservative estimate from the Australian Strategic Policy Institute found “that more than 80,000 Uighurs were transferred out of Xinjiang to work in factories across China between 2017 and 2019.”

In February, The Washington Post reported on forced labor at the Taekwang factory in Laixi, China, which has supplied Nike with shoes for more than 30 years and produces about 8 million pairs of athletic shoes yearly.

Approximately 700 of the factory’s workers were Uighurs transplanted from Xinjiang, according to the Post, and the factory has all the trappings of a prison, with barbed wire, surveillance cameras, watchtowers and a dedicated police station. The newspaper also found that Uighur workers, who are required to attend patriotic education and Mandarin classes, had not come to the factory voluntarily; nor could they return to Xinjiang for holidays.

Earlier this year, Nike released a statement saying that Uighurs are no longer employed at the factory in Laixi and that the company had no relationships with the factories named in the Australian Strategic Policy Institute report. But some have remained unimpressed by Nike’s claims. As John Oliver said in a July segment of “Last Week Tonight,” the response “feels like their policy on oversight is less ‘just do it’ than ‘just talk about doing it and hope people eventually stop asking.’”

In recent months, lawyer and activist Khaled Beydoun has called for an economic boycott of Nike to directly puncture its bottom line. “Just do it. Remove the Nike shoes from your real or online carts until they not only do better, but repair the damage their history of exploiting forced labour in Xinjiang has done to those bonded to those hard chairs and oppressive sewing machines,” he writes in The New Arab.

Liverpool inked its deal with Nike in January, worth about $40 million per year, before the sportswear behemoth was exposed by the Post.

A player’s uniform is far more than mere cloth worn on the pitch. It is often a club’s largest export to the outside world, as well as being the most common symbol of fandom. As Liverpool COO Billy Hogan noted at the time of the agreement with Nike, “Our iconic kit is a key part of our history and identity.”

This identity now bears the fingerprints of Uighur Muslims in servitude.

Liverpool’s four Muslim players, including superstar Mohamed Salah, have remained mum on the Uighur issue, even as others such as Arsenal’s Mesut Ozil and Istanbul Basaksehir’s Demba Ba have intrepidly spoken out.

Salah’s response is particularly curious. The Egyptian’s open displays of faith on the field have reduced Islamophobia in the city of Liverpool and landed him on Time magazine’s 100 most influential list for 2019. He has drawn legions of Muslims fans from all over the world, to whom the club unfailingly wishes “Eid Mubarak.” 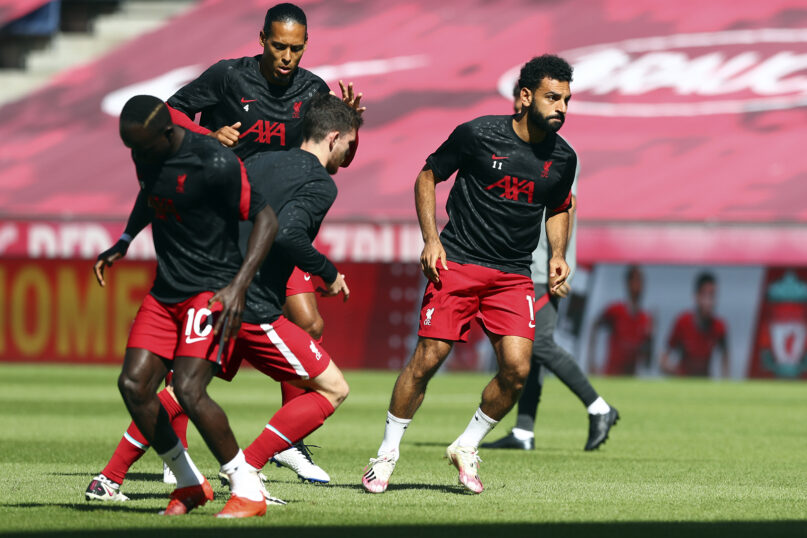 Nor has Liverpool FC itself said a peep, and perhaps little wonder: Nike’s Liverpool shirts are flying off the racks at a record clip. The team continues to unabashedly promote the product and partnership with Nike, which promises the club a 20% cut from all merchandise sales.

What’s a disenchanted fan to do?

In my mind, spurning Nike isn’t enough. I have to reach deeper into myself to fully expunge any complicity in the subjugation of Uighurs. And though the scale of my individual protest may be small, it is one less brick in the global indifference that has built up to China’s ethnic cleansing in Xinjiang.

Giving support to any sports team is an immersive experience. It is about more than just rivalry or entertainment. Being a fan involves not only investing your passions and emotions in a team’s cause; it also means freely committing a part of your multifaceted identity to it. Who and what we cheer for are a reflection of who we are.

Identifying Liverpool’s malfeasance is only a start. My faith commands me to go further and act on it. This will mean no new Mohamed Salah jersey or English Premier League games on television. This will mean a voluntary choice to unhitch myself from a Liverpool squad that is likely to vanquish all in the coming football seasons.

If there’s an ongoing lesson from the Black Lives Matter movement, it is that athletes and teams possess an awesome power to bend the moral arc of our society toward justice. A glimmering hope thus remains that Liverpool can still leverage its considerable football success and global brand to compel Nike to remove these rusting links of Uighur labor from its supply chain.

Liverpool’s iconic football anthem is called “You’ll Never Walk Alone,” and its inspiring words are invoked regularly by players and fans alike. Forlorn and forgotten, Uighur Muslims now need a force like Liverpool to walk beside them.

(Jalal Baig is a physician and writer in Chicago whose work has appeared in The Washington Post, NBC News, The Atlantic, The Guardian, Slate, STAT News and other publications. The views expressed in this commentary do not necessarily reflect those of Religion News Service.)