(RNS) — The first time I saw a voter guide at church was in 2008, when I attended First Baptist Church of Naples, Florida, while working as a sportswriter at the local paper. The guide claimed to be nonpartisan, adhering to the Johnson Amendment, the 1950s tax code provision that forbids nonprofit organizations such as churches from endorsing or opposing political candidates.

The veneer of nonpartisanship, however, was razor thin. The guide, which misspelled Barack Obama’s name, also included a place for the church to pray for the end of abortion, a plank of only one major American political party.

Twelve years later, in the midst of a global pandemic, these partisan pamphlets disguised as voter guides are still being sent to churches across America, especially in swing states like Florida and my home state of Minnesota.

I received my voter guide last week at the small Lutheran church where I serve as pastor in rural southwestern Minnesota. The guide came with an attached letter from the Faith and Freedom Coalition, a socially conservative nonprofit headed by American evangelical pastors  and founded, not surprisingly, in the second year of Obama’s presidency. Its founder, Ralph Reed, saw it as an heir to the Christian Coalition, an organization that supported far right-wing Southern Baptist pastor and presidential candidate Pat Robertson in the 1980s and ’90s. It last made big news when Robertson claimed that Hurricane Katrina was the result of America’s abortion policy.

RELATED: Christian nationalism, the border and Fourth of July church in Dallas

President Donald Trump gave his public support to the FFC in 2017, and the organization is a big part of Trump’s reelection campaign in 2020. As of late August, the FFC’s 2020 Project had funded 64 million Facebook and Google ads, made 10 million phone calls and sent 28 million emails and 20 million text messages, aiming to reclaim the House of Representatives for the Republican Party. The 2020 Project’s strategy leans on identified battleground states and Christians who identify as conservative and pro-life.

What all this has to do with the Bible or with the gospel of Jesus seems to have fallen pretty far afield in favor of a massive political organizing movement, led by a small group of affluent, white male megachurch pastors. 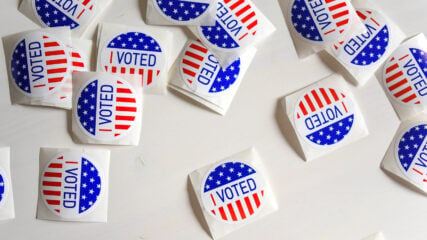 The letter I received was signed by Jerry Falwell Jr., who resigned as Liberty University president recently in the fallout of a sex scandal, and by close Trump ally and First Baptist Dallas Pastor Robert Jeffress, who last year suggested Trump’s impeachment might lead to World War III. Among the other signers were Focus on the Family President James Dobson, a supporter of conversion therapy for people who are gay, and Jack Graham, pastor of Prestonwood Baptist Church in Plano, Texas, which withheld $1 million of tithes from the Ethics and Religious Liberty Commission of the Southern Baptist Convention in 2018 because Prestonwood deemed the ERLC as insufficiently supportive of Trump.

On Fourth of July weekend in 2018, I attended Graham’s church while researching for my recently published book about Christian Trump voters. The service included a montage about military sacrifice being akin to Jesus’ sacrificial death on the cross. The guest preacher, end-times writer Gary Frazier, said he “felt sorry” for anyone who was born after 1962, suggesting that civil rights protests legislation passed during that era made America worse, not better.

Graham himself spoke in euphemistic terms about children’s detention centers on the U.S.-Mexico border as a result of Trump’s harsh immigration policies, calling them “shelters,” and suggesting that the Trump administration was acting as a loving parent, not a harsh and violent police force.

Graham, Reed and others whose names accompanied the voter guide are familiar to me, because I’ve spent years researching their political activity and often intolerant political views.

The same can’t be said for the average American pastor, who is coping with the upheaval of worship services and other church activities during this pandemic. Most pastors and churches are barely hanging on and don’t have the energy to vet mailings. Many will skim the letter, see a few words like nonpartisan, stewardship, citizenship, voter guide, voter registration, and think, “OK, let’s use this.”

If they had time for a closer look, these pastors might notice the subliminal messaging of the guide: Women with short hair are Democrats who want abortion on demand; white men in suits are Republicans who support all the buzzwords conservatives have been hearing about on Fox News for years.

The pastor also might notice that it seems to be a retread of the 2016 guide, given its lack of current issues or mention of crises like COVID-19 or national protests against racism and police brutality.

As a pastor and a Christian, I’m not sure what was most troubling about the mailing. Was it the lack of nuance on issues like abortion, education or health care? The assumption that Christian voters are all white males and women with short hair are radical Democrats? Was it the use of the term “Christian” as a branding tool, casting aside a gospel rooted in sacrifice, humility, truth and justice?

What might bug me most is that I have never received anything like it from a centrist or liberal Christian nonprofit, including my own denomination. I’ve rarely heard an alternative narrative for how Christians might seek to cast their votes, with the well-noted exception of the Black church’s history in political involvement for civil rights, voting access and anti-poverty advocacy.

Meanwhile, according to my unscientific survey of pastors across America, especially in the Midwest and swing states, the FFC guide was sent to tens of thousands of churches at a cost of millions of dollars.

It is one of the too-often unrefuted claims that Christians in American politics must necessarily vote Republican. At one point, conservative political outreach to pastors may have led with church teachings or Bible passages. But it’s clear that conservatives are seeking engagement simply in order to make Christians more conservative, or perhaps better stated, more Trumpian. No longer do right-wing Christians seek to make the Republican Party more Christian.

I’ve written all these words and still said little about Jesus. What would Jesus think of this mailing, of these pastors who have jumped fully on-board a deeply partisan agenda?

On this point I can only think of Jesus, humble and single-minded, standing before Pontius Pilate in a Roman court, on trial because of the threat he represented to the Roman government and to the religious hierarchy. Jesus’ mission was so opposed to the entrenched political powers aligned with money and influence that they crucified him. It’s clear where Jesus stands in 2020, on the side of the truth and not those who would seek to obscure it for political gain.

(The Rev. Angela Denker is a Lutheran pastor and veteran journalist whose “Red State Christians: Understanding the Voters Who Elected Donald Trump” was recently published by Fortress Press. The views expressed in this commentary do not necessarily represent those of Religion News Service.)