(RNS) — A longtime faculty member at Taylor University no longer has a job at the Christian school, reportedly after posting a video of a song he’d written titled “Little Hitler” on YouTube.

An email sent Tuesday (Sept. 1) to the “Taylor University Family” from the school’s president, provost, dean and board chair confirmed James Spiegel, a professor of philosophy and religion, no longer is employed by the university in Upland, Indiana.

Spiegel, who had been employed by the university since 1993, according to his curriculum vitae, is a controversial figure on campus.

He wrote a petition opposing plans to bring Starbucks to campus because of its “stands on the sanctity of life and human sexuality” and signed onto another supporting Vice President Mike Pence’s invitation to speak last year at graduation. Taylor’s president resigned a month after Pence’s visit, which sparked sharp disagreement on campus.

He also was one of the authors of an anonymous conservative newsletter that popped up on campus with complaints that the school had become too liberal.

“We published it in order to express a conservative perspective that we sensed could use more representation on campus and to create substantive conversation in our community about a variety of issues,” he told Religion News Service in an email last year. 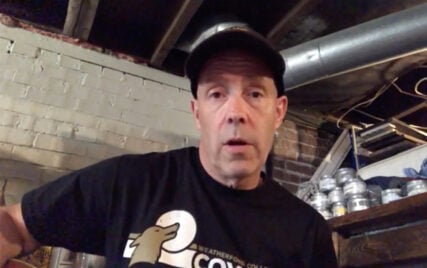 Spiegel told Taylor’s student newspaper, The Echo, that he was fired after he posted and declined to remove a YouTube video two weeks ago in which he performed an original song titled “Little Hitler.” The professor claimed the school had received a harassment complaint about the video. He also said he previously had performed the song at chapel and at a faculty retreat, according to The Echo.

The song includes the lyrics: “We’re appalled at injustice and oppression and every atrocity that makes the nightly news, but just give it a thought: If you knew you’d never get caught, you’d be thieving and raping and murdering, too.”

Spiegel had posted the video on a YouTube channel called “Picking Your Brain.” Other songs on the site, including “Mr. Government Man” and “Let’s Start Our Own Country,” feature the professor singing songs under the stage name “Philonous” that appear to be political commentary.

“COVID-19 is everywhere, so wear your masks and maintain proper social distancing,” he sings in another song. “Crowds can gather to riot in the street, but people can’t meet in a church to sing.”

Spiegel did not immediately return requests for comment by RNS.

Taylor does not comment on “personnel matters,” according to the email from school leadership. It did not specifically say Spiegel was fired.

But the email to the campus community addressed the “process by which this separation occurred,” saying the school followed the procedure to restore damaged relationships in its “Life Together Covenant.” That included engaging faculty leadership, the academic department and the administration.

“In this case restoration was not possible,” it read.

University leaders did not name what relationships were damaged that led to Spiegel’s departure.

But they said in the email that his departure had nothing to do with politics or restricting academic freedom.

“Taylor is not a political enterprise, nor was this an effort to silence disagreements with the University and/or its leadership,” the university leaders wrote. “There is no mandate or effort to remove people based on politics or ideology, nor is there a desire to ‘cancel’ the opinions of others.”