Flames lick above emergency vehicles on Highway 162 as the Bear Fire burns in Oroville, California, Wednesday, Sept. 9, 2020. The blaze, part of the lightning-sparked North Complex, expanded at a critical rate of spread as winds buffeted the region. (AP Photo/Noah Berger)
September 11, 2020
Alejandra Molina

LOS ANGELES (RNS) —  In the past few months, volunteers with United Sikhs have logged hundreds of hours, handing out thousands of meals to people without homes during COVID-19 and to others in need.

Since the fires began scorching Northern California, those volunteers have prepared about 700 meals to people who have lost their homes or been evacuated. United Sikhs is accepting monetary donations to help those affected by the fires.

Amarpreet Singh, who helps coordinate volunteers for United Sikhs, a nonprofit humanitarian relief and development organization, said he is thankful for the opportunity to serve.

He considers himself lucky.

“Not everyone has the chance to volunteer,” Singh said.

As wildfires rage across the West Coast, religious groups like United Sikhs and their volunteers are receiving donations, delivering meals and offering sanctuary to families who have either lost their homes or who have been forced to evacuate their neighborhoods.

A lightning-sparked collection of fires known as the North Complex has burned more than 252,000 acres through Plumas, Butte and Yuba counties and has claimed 10 lives as of Thursday. Thousands have fled their homes. It was one of more than two dozen burning in California. 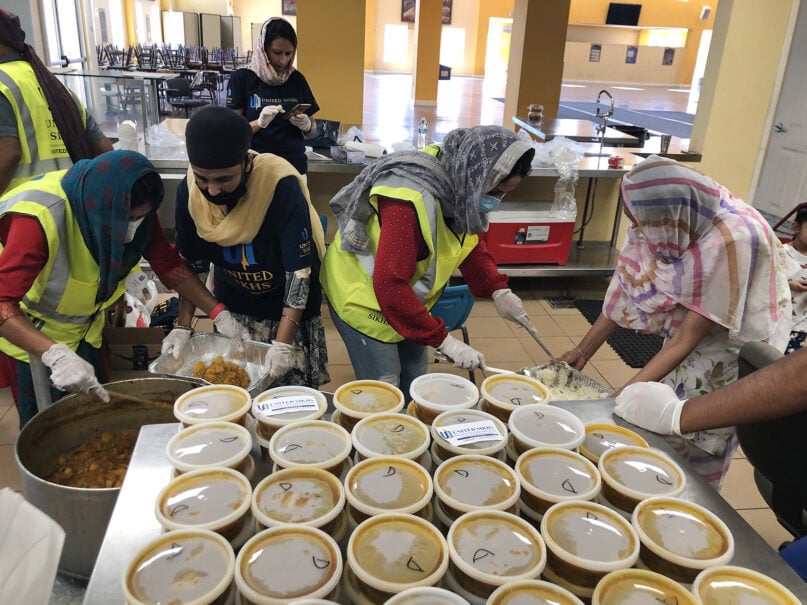 Deadly wildfires burning across the state of Oregon have forced an estimated 500,000 people there to evacuate — more than 10 percent of the state’s 4.2 million people, the Oregon Office of Emergency Management reported late Thursday.

Faith groups have responded with a helping hand.

In California’s Central Valley, Clovis Hills Community Church has been accepting perishable donations and has opened up their parking lot for evacuees who need to sleep in their cars. People have also camped out in tents on church grounds.

Erin Cox, a church member, has been taken aback by the public’s generosity. She teared up talking about people impacted by the fires who have volunteered their own time to help.

“People who have lost everything, their entire home, they're coming back to volunteer the next day,” Cox said.

“These people don’t want to take,” she said. “They want to save it for their neighbor.”

Cox said church volunteers set up a tent to receive physical donations and perishables that the Red Cross cannot accept due to COVID-19. The nearby Creek Fire had burned more than 175,000 acres as of Thursday.

Volunteers are praying with people, playing with kids on the grass, and cleaning up the area as pets have also been staying there.

“There’s so much division in the world right now, to see people of every background come together, it's brought us to our knees,” Cox said.

As the California director of Southern Baptist Disaster Relief, Mike Bivins has kept busy this week.

Bivins said about 60 church volunteers have been working in shifts to help distribute food to evacuees who have been placed in area hotels by the Red Cross.

Bivins said they’ve also deployed chaplains to provide company and guidance to people who have been evacuated. This work has been challenging during COVID-19, as chaplains have to wear protective gear and keep socially distant from those they accompany, Bivins said.

Porter said their chaplains provide guidance to people of all faiths, including those who do not belong to any religious group.

Porter is passionate about doing this work.

“We have lots of conflicts over lots of things, political situations and racial tensions, and we just show up when the world falls apart,” Porter said.

“We're trying to help people, trying to pull ourselves back together,” he added. “We come in, not with an agenda, but with the love of God in our hearts.”