“Today it is my honor to nominate one of our nation’s most brilliant and gifted legal minds to the Supreme Court,” Trump said of Barrett at the announcement ceremony on Saturday (Sept. 26). “She is a woman of unparalleled achievement, towering intellect, sterling credentials, and unyielding loyalty to the Constitution.”

Trump also acknowledged some of the religion-related subtext surrounding Barrett’s nomination, saying: “Rulings that the Supreme Court will issue in the coming years will decide the survival of our Second Amendment, our religious liberty, our public safety and so much more.”

Barrett spoke after Trump, discussing her family and her general feelings about the role of a judge.

The Trump White House reportedly did not interview anyone else for the seat. Barrett was previously considered a potential Supreme Court nominee in 2018, when Trump chose Justice Brett Kavanaugh.

RELATED: Is Judge Barrett’s ‘kingdom of God’ different from Obama’s?

Her nomination was celebrated by Richard W. Garnett, director of the Program on Church, State and Society at Notre Dame University, where Barrett attended law school and where she has taught since 2002.

Garnett called Barrett “a person of outstanding character, deep generosity, good judgment, and keen intelligence,” in an email to Religion News Service. “She is an award-winning teacher, a valued mentor, a careful and well-regarded scholar, and now an accomplished judge. She would, if nominated and confirmed, be a worthy successor to Justice Ruth Bader Ginsburg and would provide devoted and conscientious service to the Court and to the rule of law.” 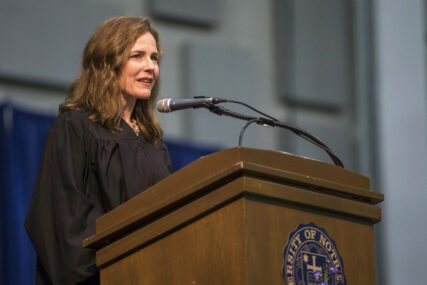 “We’re actually deeply troubled by Amy Coney Barrett’s rulings as a seventh circuit judge as well as her public statements in writings, which cast extreme doubt in her willingness to apply the law in an impartial manner,” said Sara Hutchinson Ratcliffe, head of Catholics for Choice, citing Barrett’s writings that suggest Catholics should allow their faith to inform all of their lives.

“We know that as Catholics our faith helps us form a conscience, which guides each of us in our moral decision making. But our own religious beliefs certainly are not a substitute for impartial jurisprudence, especially not in a society that’s protected by the First Amendment.”

The nomination of a conservative Catholic may be one of Trump’s many overtures to conservative Christians who helped elect him in 2016 — and may aid him again on November 3. (There was ample speculation that his reported second choice, the Cuban American Catholic Barbara Lagoa, could up his chances of winning Florida, a coveted swing state.)

But if Trump’s plan was to win back Catholics who may be abandoning him, Sister Simone Campbell, head of Catholic social justice lobby NETWORK, cast doubt on that strategy.

“If Senator McConnell and President Trump think that pushing this through will help them win Catholic votes, then they don’t know Catholics,” Campbell said in a statement. “Unlike these politicians focused on taking power at all costs, we love our country more than political power. We Catholics will vote for integrity, justice, and the common good.”

RELATED: Playing the anti-Catholic card in the Barrett nomination

She added: “Judge Barrett shares my faith, but her past words and actions prove that she does not hold all life to be sacred. As a judge on the Seventh Circuit Court of Appeals, Barrett voted to allow employment discriminations against the elderly, attacked the protections of the Affordable Care Act, and even tried to uphold the wrongful conviction of a man based on faulty evidence. These are not the opinions of a nominee worthy of a lifetime appointment to the highest court in the land.”

Barrett has been the target of criticism for her past membership with People of Praise, a group connected to the Charismatic Catholic movement. Devotees of the group, which is not exclusively Catholic, allegedly swear a lifelong loyalty oath to one another and are reportedly held accountable by a chosen adviser. Some adherents hold deeply traditional views about gender roles.

During Barrett’s 2017 appeals court confirmation hearing, California Senator Dianne Feinstein raised questions about the judge’s ability to balance her faith with her dedication to the law. “The dogma lives loudly within you,” Feinstein said.

The line frustrated observers such as Frederick Gedicks, professor at Brigham Young University Law School and expert on religious liberty law. “It almost sounded like (Feinstein) was telling her ‘You are too religious to a religion that is too strange,’” said Gedicks, a member of the Church of Jesus Christ of Latter-day Saints. “That suggestion is deeply inappropriate, deeply wrong.”

Gedicks said questions about how Barrett’s faith informs her decisions are fair game provided the underlying tone is “one of respect.”

In that 2017 hearing, Barrett dismissed the idea that her faith would color how she ruled. “It’s never appropriate for a judge to impose that judge’s personal convictions — whether they derive from faith or anywhere else — on the law,” she said.

Much of the controversy around Barrett’s views about jurists’ duties to their faith arises from a 1998 law review article Barrett co-wrote with then-Notre Dame professor John Garvey, who now serves as president of the Catholic University of America. Among other things, the co-authors argued that “Catholic judges (if they are faithful to the teaching of their church) are morally precluded from enforcing the death penalty.” 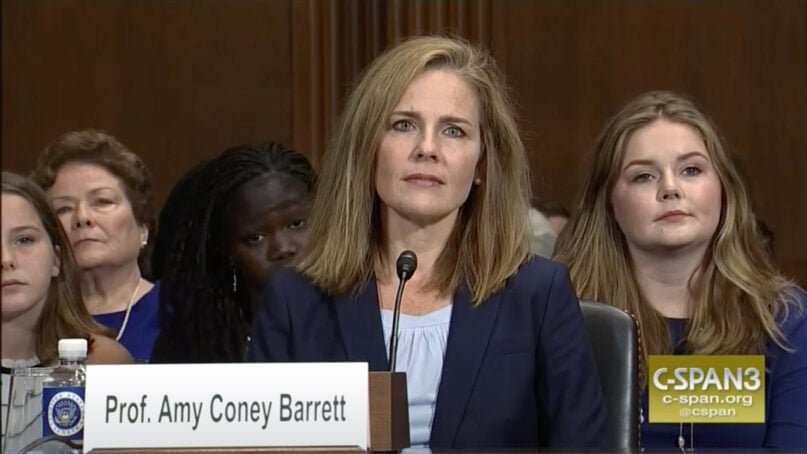 Judge Amy Coney Barrett appears at her nomination hearing to sit on the 7th Circuit Court of Appeals in September 2017. Video screengrab

When Sen. Chuck Grassley brought up the article during Barrett’s 2017 hearing, however, Barrett distanced herself from the article. “Would I or could I say that sitting here today, that that article and its every particular reflects how I think about these questions today with, as you say, the benefit of 20 years of experience and also the ability to speak solely in my own voice? No, it would not,” she said.

Barrett has involved herself in death penalty cases in her role as an appellate judge, joining a ruling in July of this year denying Daniel Lewis Lee’s motion for stay of execution.

But Barrett’s answer to Grassley didn’t betray exactly how Catholic teaching would play in her approach to abortion, immigration or climate change cases. Nor did she completely disavow her 1998 article. “I continue to stand, and vehemently believe, the core proposition of that article, which is that if there is ever a conflict between a judge’s personal conviction and that judge’s duty under the rule of law, then it is never, ever permissible for that judge to follow their personal convictions in the decision of a case, rather than what the law requires,” she said.

Gedicks argued that fully recanting her law review article now, even if she is operating sincerely, would “look opportunistic” to observers.

Gedicks noted that Barrett’s greatest impact on the court may be on its religious liberty rulings.

“I think it’s possible that there will be robust protection of LGBT rights, but also robust religious liberty exemptions,” he said. “Whether that’s a good thing or a bad thing, we’ll have to wait and see how they work everything out.”

Barrett’s position on religious liberty may affect most Americans in any future rulings on the scope of the Affordable Care Act. In 2012 she signed a letter crafted by the Becket Fund decrying the ACA’s birth control benefit as an attack on religious liberty.

“It is an insult to the intelligence of Catholics, Protestants, Eastern Orthodox Christians, Jews, Muslims and other people of faith and conscience to imagine that they will accept an assault on their religious liberty if only it is covered up by a cheap accounting trick,” the letter read in part.

The first signature on the letter was that of her onetime law review article co-author, John Garvey. 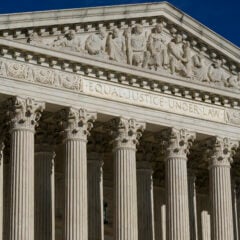 One Eye Squinted
Overturning Roe v. Wade inches us back toward the arc of justice
Follow us on Facebook!
Submit your photos to RNS