VATICAN CITY (RNS) — Days after the resignation of his onetime rival, Cardinal Angelo Becciu, Australian Cardinal George Pell, the former prefect for the economy at the Vatican, is returning to Rome on Tuesday (Sept. 29).

Pell was nominated by Pope Francis in 2014 to spearhead the reform of the Vatican’s scandal-ridden finances but was forced to return to Australia in 2017 to face charges of sexual abuse of minors. It’s not known how long Pell will stay in Rome or whether he will take up new duties. He was succeeded as prefect for the economy by the Rev. Juan Antonio Guerrero Alves, a Jesuit priest.

Australia’s High Court unanimously acquitted Pell on appeal of all charges in April 2019.

His return to Rome takes place after Becciu, formerly the No. 3 official at the Vatican under Pope Benedict XVI, was ousted by Francis from his most recent post as head of the Congregation for the Causes of Saints on Thursday. Francis had shifted Becciu out of his high-ranking job as sostituto in 2018 amid accusations that he had misused Vatican money and engaged in nepotism.

As a result of his retirement last week, Becciu maintains the rank of cardinal but lost all his Vatican positions and his rights to his title, including attendance at the conclaves that elect the pontiff.

“The Holy Father was elected to clean up Vatican finances. He plays a long game and is to be thanked and congratulated on recent developments,” Pell said in a statement Friday after Becciu’s resignation.

As Francis has worked to enforce financial transparency and accountability, Pell and Becciu have come to represent two opposing models of reform, and the two have faced off over how to amend the Vatican’s practices. 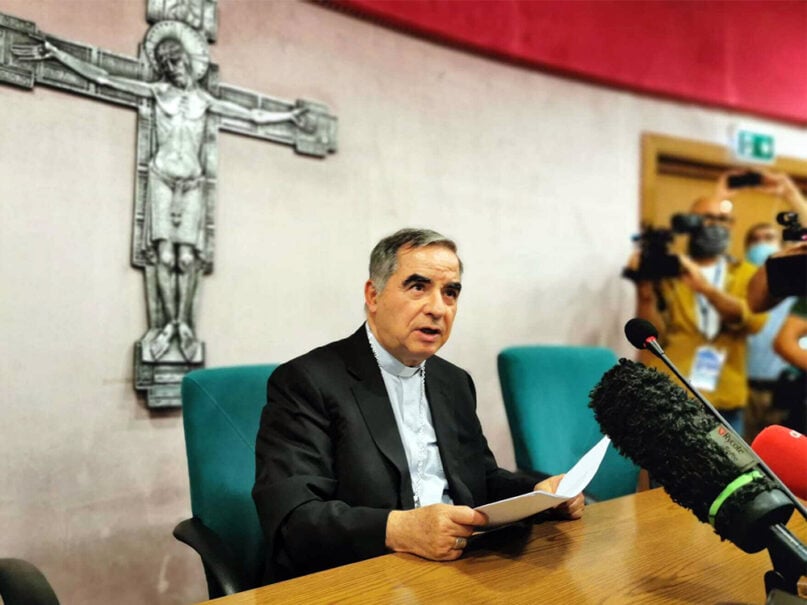 “There was a professional clash with Pell,” Becciu said on Friday, answering questions by reporters during a news conference the day after his dismissal. “He wanted to enact laws that had not been enacted yet, while the role of the substitute is to apply laws that are already in place.”

“I knew (Pell) was angry with me,” Becciu said, adding that during one meeting Pell “interrogated” him about his thoughts on the papal reforms and corruption. Pell was particularly interested in Becciu’s support for the Secretariat for the Economy and the Administration of the Patrimony of the Apostolic See, the Vatican’s department charged with administrating payroll and real-estate holdings.

Becciu said he and Pell also met with Pope Francis to discuss the management of funds overseen by the Vatican Secretariat of State. On that occasion, Becciu said, Pell accused him of “being dishonest.”

“‘Don’t you dare say this to me,’ I told him,” Becciu recalled. “Since I was a child I was educated to be honest.” Becciu said Francis praised him for his response afterward.

Despite their clashes, Becciu said, he and Pell parted ways amicably when Pell was called back to Australia. Becciu said he sent Pell a message of friendship, with hopes that he would prove his innocence.

“If he still considers me corrupt, patience,” Becciu said. “My conscience tells me I am not.”