VATICAN CITY (RNS) — As conflict, pollution and a pandemic plague the world, a new document issued by Pope Francis on Monday (June 1) – imposing transparency and efficiency measures within Vatican finances – may seem unimportant. But for observers within and outside the walled city-state, the pope’s move is a “game-changer.”

The document completely overhauls the way the Vatican invests its money. As veteran Vatican reporter John Allen put it, “nothing Pope Francis has done prior to Monday has greater potential to truly remake the Vatican’s conventional ways and means.”

In the new document, Pope Francis wrote: “In order to allow for a more efficient handling of resources, I have decided to approve a series of norms aimed at promoting transparency, control and competition in the awarding of contracts for goods and services.”

The main takeaways are the creation of a register of vetted contractors who can bid to supply goods and services to the Holy See and the Vatican. Also, the acquisitions are centralized under the Administration of the Patrimony of the Apostolic See (APSA), which oversees the Vatican’s real estate and financial dealings, or the Government of the Vatican City State, the executive branch at the Vatican.

In an interview published by Vatican News, Vincenzo Bonomo, dean of the Pontifical Lateran University in Rome, said the centralization proposed in the document aims at reducing inefficiencies and waste at a time when the world – and the Vatican – are struggling financially due to the pandemic.

“We will be able to eliminate the plague of wastes, losses, and also prevent corruption in all its forms,” Bonomo said.

Once the document is enacted at the end of the month, Vatican departments, such as the Secretariat, will have to file an explicit request for the investment to APSA and the government.

The document also excludes any contract with operators who have a conflict of interest in the deal or have ever been convicted for corruption, fraud, money laundering, financing terrorism or partaking in human trafficking.

Operators may also be excluded from entering a deal with the Vatican if they have evaded taxes in their country of origin, if represented by a trust fund (which allows for the concealment of the identity of participants) or if they reside in a tax haven. Any attempt to acquire advantages or confidential information, any attempt to provide false information, or commitments of grave violations against the environment are also cause for being excluded from providing goods and services to the Vatican and Holy See. 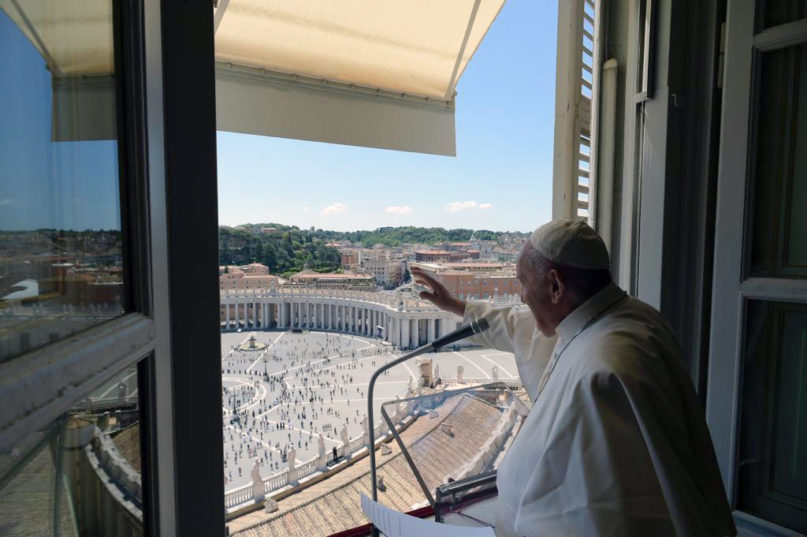 Pope Francis delivers his blessing from his window at the end of the Regina Coeli noon prayer on May 24, 2020, in St. Peter’s Square at the Vatican. For the first time in months, well-spaced faithful gathered in the square for the traditional Sunday papal blessing, casting their gaze at the window where the pope normally addresses the faithful, since the square had been closed due to anti-coronavirus lockdown measures. Photo by Vatican Media

Francis’ new norms could prevent the Vatican from entering into deals like the $200 million investment into prime real estate in London that made headlines in 2019 and was described as a “scandal” and “opaque.”

In that deal, the Secretariat for the Economy acquired the services of Gianluigi Torzi, who according to leaked documents earned over $10 million in service fees. Torzi was also flagged by Roman authorities last year for “crimes of false invoicing and fraud.”

All future deals will have to be approved by a judicial committee and any real estate deal must be preceded by an evaluation by APSA or the Government of the Vatican. The president of the Vatican City State Tribunal, Giuseppe Pignatone, appointed by Pope Francis with a background of fighting mafia and corruption, explained in a commentary for Vatican News that the document charges the Vatican judiciary with the responsibility of upholding the new norms.

“This new competence is a manifestation of the trust the Holy Father places on the Vatican judges,” Pignatone wrote. “I can guarantee there will be the utmost effort on our part to deserve it.”

The office of the auditor general, the Financial Information Authority (Aif) and the Secretariat for the Economy will also be charged with identifying fraud and corruption. In the previous weeks, the Vatican announced that its accounting division, the Data Processing Center (Ced), would be placed under the supervision of the Secretariat for the Economy instead of APSA.

As with the decision to move CED under the jurisdiction of the Secretariat for the Economy, the new document applies changes that Cardinal George Pell pushed for in 2017, before he was called back to his native Australia to answer historic sex abuse charges, which he was acquitted from in April.

The document issued on Monday “was born in the Secretariat for the Economy during Cardinal George Pell’s tenure,” a source who participated in the Pell-directed reforms told Religion News Service.

“Various revised drafts of what could be the final document were produced up until Pell’s departure for Australia in the summer of 2017,” the source, who wishes to remain anonymous, said. “In fact, having understood its importance, His Eminence, Cardinal Pell, wrote to the Secretary of State, Card. Pietro Parolin, in June of 2017 to transmit a copy of the latest draft of the proposed document, stress its great importance to the Holy Father’s reforms, and to invite him to coordinate its further development, involving representatives of various other Vatican organisms and entities.”

According to the source, it was the prefect of the Secretariat for the Economy, the Rev. Juan Antonio Guerrero, who “provided the final support and push needed to bring the project to fruition.”

“A major milestone has been reached in the Holy Father’s reforms,” the source added.