(RNS) — Kyle Meyaard-Schaap didn’t even make it to the climate change section of the first presidential debate between President Donald Trump and former Vice President Joe Biden. Despite running Young Evangelicals for Climate Action, an environmental advocacy group, Meyaard-Schaap only managed to watch about 30 minutes before he picked up his remote and turned off the program in disgust.

“It wasn’t so much a debate as a shouting match with no structure,” he said. He decided to switch over and watch the television show “Black-ish” instead.

“It seemed clearer than ever that he (Trump) doesn’t have any respect for American voters,” Meyaard-Schaap, 31, said, adding that he felt disrespected as an evangelical by what he sees as Trump’s clearly transactional relationship with the religious voting bloc.

To be fair, Meyaard-Schaap was one of many viewers — of all religious stripes, and none — who found themselves exasperated by the first public sparring session between the presidential candidates on Tuesday evening (Sept. 29). The encounter was widely panned as chaotic, with the president frequently talking over his opponent and both candidates trading barbs tinged with barely contained contempt.

But while the debate may have alienated many viewers, evidence quickly mounted that Trump’s bombastic performance — as well as his response to questions about white supremacy — didn’t sit well with a group whose tenuous ties with the GOP have been further fractured by his presidency: younger white evangelicals.

An early hint of that frustration emerged roughly an hour into the debate when the Twitter account of Hillsong Church, a global evangelical community that caters to younger worshippers, tweeted out a message that read, “Can’t they just mute Trump’s microphone!! He is coming across as such a bully. No respect for him sorry.”

Hillsong, headquartered in Australia, later apologized for the tweet, which was promptly deleted, explaining the message was published accidentally by a staffer who thought they were tweeting from their personal account.

“Hillsong does not comment on partisan politics,” read the church’s statement. 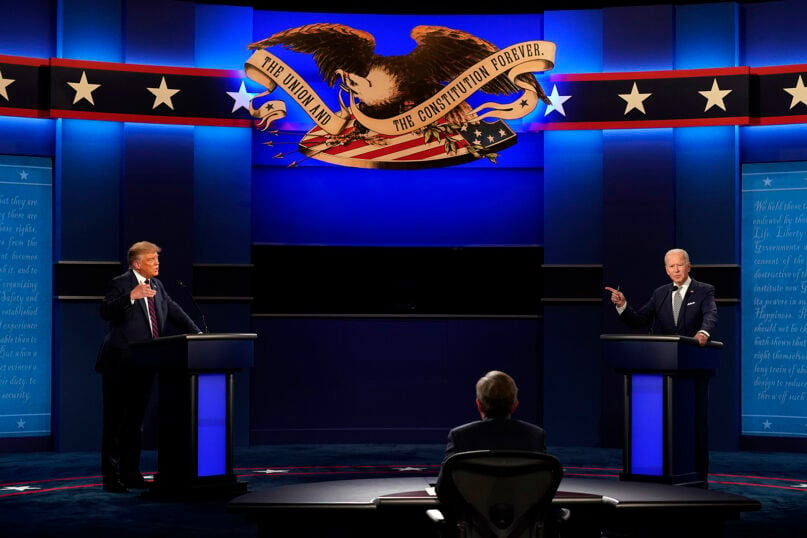 But despite the apology, many celebrated the initial tweet (and the accidental tweeter) on social media. Others were quick to express shock regarding Trump’s response when he was asked to condemn white supremacy during the debate: The president initially said “sure,” but when pushed by Biden to condemn the Proud Boys — a group known for sharing white nationalist memes and that marched alongside extremist groups during the 2017 “Unite the Right” rally in Charlottesville, Virginia — Trump said the group should “stand back and stand by.”

“The President of the United States could not clearly condemn white supremacy,” tweeted Melissa Moore, the daughter of popular Bible teacher Beth Moore.

Slightly older evangelicals were also concerned by Trump’s remarks. J.D. Greear, pastor of The Summit Church in North Carolina and president of the Southern Baptist Convention, tweeted out a thinly veiled reference to the president’s remarks on Wednesday afternoon.

For anyone trying to make "both-sidesism" work re. yesterday's dumpster fire of a debate, consider this question:

Do you honestly believe that if Joe Biden were debating anyone else that it would have gone down like it did?#Debates2020

“When asked to condemn white supremacy, every single one of us should be ready to do so,” tweeted Greear, 47. “Racism is, sadly, not extinct, and we know from our Southern Baptist history the effects of the horrific sins of racism and hatred.”

“They’ve come of age in a multicultural, multiracial environment,” Cox said. “That creates a very different approach to politics when you have these close connections to people who are very different from you. When you ask how many folks have friends or family members who are gay or lesbian, or of different religions or races, younger evangelicals are just far more likely to have those relationships.”

Cox pointed to data highlighting this generational shift within white evangelicalism toward politics in general and Trump in particular. In a 2019 Voter Study Group survey, 80% of white evangelicals over 45 expressed a very favorable or somewhat favorable view of Trump. But when surveyors asked white evangelicals aged 18-44 the same question, only 61% said the same.

Cox was quick to note these trends predate Trump and have already appeared in the world of electoral politics. Two prominent Democratic faith outreach experts are younger white evangelicals: Joshua Dickson, who heads up Biden’s faith outreach team, and Michael Wear, who did the same for Barack Obama’s 2012 reelection campaign. 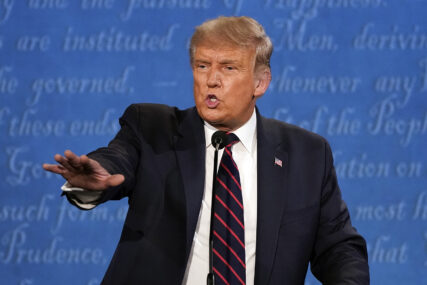 Wear argued that while many young evangelicals may retain support for Trump, Tuesday night’s debate likely made it more difficult for them to justify their choice to nonevangelical friends.

“They were looking last night for a Donald Trump that they could defend to their peers,” he said. “If that Donald Trump exists at all, he sure didn’t show up last night.”

The president’s perceived lack of “Christian kindness” is already hurting him with faithful Americans in general. According to a recent survey of religious voters — including Catholics and evangelicals — conducted by a slate of academics and paid for by the liberal advocacy group Vote Common Good, “the perception that Trump lacks basic Christian kindness is the strongest driver of defecting from Trump in 2020.”

This perspective appeared to inform Shauna Niequist, the daughter of former megachurch pastor Bill Hybels, who voiced her frustrations with Trump’s debate antics on Wednesday.

The post was accompanied by a white image emblazoned with a sentence that read “I watched the debate tonight, and at a certain point my rage turned into tears.”

There are matters where younger and older evangelicals still have much in common. Cox said younger evangelicals don’t differ much from their parents on issues of race, a trait he said tracks with younger white Americans as a whole.

But younger evangelicals do differ from their parents in key ways: They are more supportive of immigrants, LGBTQ rights and taking action on climate change than their older compatriots.

And while Trump’s brand of politics may exacerbate those trends, they are unlikely to go away even if Trump is not reelected.

For his part, Meyaard-Schaap said he did eventually go back and read accounts of Trump’s response when he was pressed on whether the climate was changing due to human activity.

“He hedged on the very existence of the problem at all,” Meyaard-Schaap said. “Trump’s insistence that he doesn’t think he needs to get serious with climate change is a perfect distillation of how far apart he and younger evangelical voters are on the issue.

“Young evangelicals are tired of the kind of politics that tells them they either need to check their faith or their brain at the door.”