VATICAN CITY (RNS) — For the first time since 2016, the Vatican has released its financial budget for the administration of Roman Curia. “The faithful have the right to know how we utilize our resources,” said the prefect for economy at the Vatican, the Rev. Juan Antonio Guerrero Alves.

Speaking to Vatican media outlets on Thursday (Oct. 1), Alves said the pursuit of financial transparency is a priority for Pope Francis, who demands “the economy of Holy See must be as transparent as a glass house.”

The report shows the Vatican Curia earned more than $360 million in 2019, with an expenditure of almost $374 million, leaving a deficit of about $14 million, which is an improvement from the over $88 million deficit it incurred the previous year.

The net assets reported in the budget amount to more than $1.6 billion.

The official numbers refer specifically to the Roman Curia, which comprises the 60 institutions and departments charged with administering and enacting Pope Francis’ goals for integral human development, evangelization and education projects.

The publication of the budget comes at a time when the pope is enacting sweeping financial reform, changing the way the Vatican manages money, from real estate to banking to public procurement.

The long-awaited reform coincides with numerous reports of Vatican financial scandals, which have led to several firings and departures, most recently the resignation of the former No. 3 at the Vatican, Cardinal Angelo Becciu, who has disputed accusations of mismanagement and nepotism.

“It is possible that, in some cases, the Holy See has been not only badly advised but also cheated,” Alves said, referring to a controversial Vatican investment in prime real estate in London that has been at the center of scandals over the administration of charitable donations. 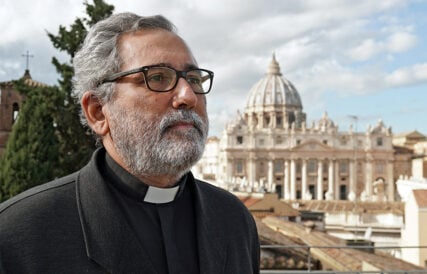 The Rev. Juan Antonio Guerrero Alves in 2019. Photo by Robert Ballecer, courtesy of Society of Jesus

“I believe that we are learning from past mistakes or imprudence,” he added.

Alves also said that, to his knowledge, no funds derived from Peter’s Pence, donations by the faithful to promote the pope’s charitable work, were used in the controversial London investment.

Instead, he said, the money came from a fund belonging to the powerful Secretariat of State in the Vatican. That fund has now been closed by Francis and the money merged into the Vatican’s newly centralized finances, according to recent reports.

“The Secretariat of State has been working on this process for months,” he said. “It is carrying out its task. It is doing a great job of ensuring clarity, transparency and order.”

The figures do not include the budgets of the Vatican Museums, donations to the Peter’s Pence charitable fund, the Vatican bank or numerous other funds and institutions, which together brought in over $4.7 billion in 2019.

If all the income was counted together, Alves noted, the Vatican would not be in deficit, but said that fact doesn’t mean its finances don’t have “any difficulties and that in this coronavirus crisis we will not have any bigger ones.”

Besides, he added, the mission of the Roman Curia is to serve the pope and the Catholic Church, meaning that unlike a state or a company revenues are not its priority. More than 65% of the money administered by the Roman Curia is dedicated to supporting missions around the world, followed by asset management (21%) and administration costs (14%).

“The worst thing we could do is not recognize the difficulty or choose the ‘every man for himself’ option. We have to walk together. We must resist,” he said.